Job vacancies plummeted by more than 10 per cent during the first full month of lockdown in Greater Sydney amid warnings those unable to find work need more financial support.

The National Skills Commission’s Internet Vacancy Index recorded its second consecutive monthly decline in online job advertisements in July, with a 3 per cent fall to 232,600 nationally. This is down from a 12-year high in May after a faster than expected recovery in the labour market. 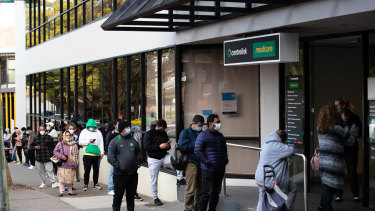 The queue for Centrelink stretches down the street during Sydney’s lockdown.Credit:Janie Barrett

NSW was the hardest-hit state with 8100 fewer job advertisements in July, or a 10.3 per cent fall. This was twice the rate of the Northern Territory, which was the second-worst performer, but overall recruitment activity remains above pre-pandemic levels.

Australian Council of Social Service chief executive Cassandra Goldie said three-quarters of people on social security payments, such as JobSeeker, were excluded from disaster support as they hadn’t been able to gain eight hours or more of paid work.

“All of them are restricted in trying to find paid work due to the lockdown,” Dr Goldie said. “With lockdowns in our most populated states, it’s never been clearer that we need stable and adequate income support in place so that people and businesses can get through this long-running crisis.”

The federal government hiked JobSeeker by $25 a week earlier this year, the biggest increase since the mid-1980s, but social services groups had hoped the increase would be more significant. At the height of the pandemic last year the rate was effectively doubled with a $550 a fortnight coronavirus supplement provided on top of government payments.

Anglicare Australia executive director Kasy Chambers said the most vulnerable jobs were casual roles and typically entry-level and even ahead of the lockdown there were about eight applicants for each of these roles.

“In this downturn, people who need the most help to find work are the ones being left behind,” Ms Chambers said.

“Tens of thousands of people have lost their jobs. They shouldn’t be trapped in poverty while they bear the brunt of lockdown.”

Economists are predicting the latest lockdowns in Sydney to stop the spread of the Delta variant of coronavirus could cost NSW tens of thousands of jobs a week, with the most significant effects showing up as reduced hours and lower workforce participation. Already, payroll jobs have taken a 5 per cent hit in Greater Sydney on Australian Bureau of Statistics data, with women bearing the brunt.

However, Indeed’s Asia Pacific economist Callam Pickering said the decline on the online jobs portal was down 5.4 per cent over the month from previously very strong activity. Hospitality, tourism and retail are the hardest hit.

“The impact on job ads has been nowhere near as large as Victoria’s second lockdown or the first round of lockdowns,” Mr Pickering said. “Right now, NSW job postings are still well above where they were before the pandemic. And in the absence of this lockdown, are at a level that is consistent with strong job creation.”

He said the impact on job advertisements would increase over August, particularly if restrictions are extended.

CommSec senior economist Ryan Felsman said it was encouraging that job vacancies were not falling at the same rate as during the nationwide lockdown last year.

“Fearful of the future, prospective employers cut recruitment activity by 26.1 per cent in March and 41.3 per cent in April last year, so the 3 per cent dip in July was relatively benign,” he said. “And overall ads are 38.3 per cent … higher than pre-COVID levels with Australia’s closed international borders exacerbating skills shortages in some industries and occupations.”