Last week’s decision to extend paid parental leave is a result of united calls from September’s jobs summit to increase the amount of government-funded time off for young families.

In an exclusive interview with this masthead, Minister for Finance and Women Katy Gallagher said the government decided it needed to “step up” and include changes to parental leave in its first budget. 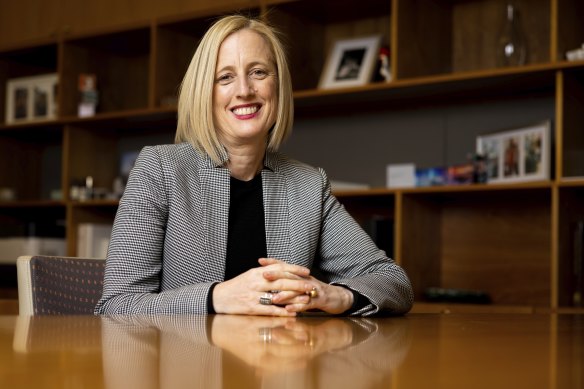 Minister for Finance and Women Katy Gallagher says the jobs summit “just focused the mind on what needs to happen”.Credit:Alex Ellinghausen

But she cautioned the women’s budget statement would be just a start to addressing other issues affecting women.

Increasing the Commonwealth parental leave scheme from 18 to 26 weeks was a long-time Labor policy, but the party did not take it to the election and Treasurer Jim Chalmers had repeatedly said this “bread and butter” budget would focus on funding Labor’s poll promises.

Gallagher said the jobs summit “just focused the mind on what needs to happen”.

“Sometimes you just have to take the step up. We just have to shift the gear, say this is what we’re going to do,” she said.

“We’ve heard what people say, this is one of the reasons why women find it hard to juggle caring and work.”

But Gallagher was not willing to put a timeline on paying superannuation on the government’s paid parental leave.

“There’s other significant costs on top of that,” she said.

The new Women’s Economic Equality Taskforce, chaired by Sam Mostyn, will examine how much parental leave should be quarantined by a “use it or lose it” rule to encourage more fathers to take more time off when their children are born.

Gallagher said the taskforce would provide its recommendations before legislation to extend the entitlement was introduced next year.

Despite the fact it will not kick in fully for four years, the paid parental leave extension will be one of three central aspects of Tuesday’s women’s budget statement, alongside the already-announced funding for expanded childcare services and the 10-year plan on women’s safety.

Gallagher promised there would be more to come in future budgets as the government made gender equality a central economic focus.

“I do acknowledge that they are substantial steps in the right direction,” she said,

Wood said experts and advocates would be feeling “energised” by how the government had responded, and there would be a continued push for more to be done.

“I think there will be ongoing pressure to move on things that will make a real difference to the lives of women,” she said.

“I hope vulnerable women are the next cab off the rank in terms of making sure that they have the necessary economic supports.”

In time, Gallagher wants the women’s budget to become a standard part of all aspects of the budget.

Wood said the government needed to start getting support work in place so the gender analysis could be standardised across government departments.

The women’s budget statement will be Labor’s first but the third in recent years after the Coalition government produced them for 2021-22 and 2022-23.

It will include economic analysis, including Treasury research on the “motherhood penalty” that showed women’s earnings fell to 55 per cent of their pre-motherhood income in the five years following the birth of their child, and that reduced income remained persistent for at least a decade.

Gallagher said it was eye-opening reading as the career cost of having children was often looked at only in the short term.

“It is pretty sobering when you look at it and reflect on the compounding nature of that over your career,” she said.