The best big siblings! John Legend and Chrissy Teigen‘s eldest children are over the moon about baby sister Esti’s arrival.

The Voice coach, 44, revealed how daughter Luna, 6, and son Miles, 4, are adjusting to their newborn sibling while sharing the first glimpse of the infant via Instagram. “On Friday, we welcomed Esti Maxine Stephens to our family, and our house is overflowing with love and joy,” he gushed on Thursday, January 19, alongside a photo of the three little ones. “I’m in awe of Chrissy’s strength and resilience and I’m so thrilled to see how Luna and Miles embrace their baby sister.” 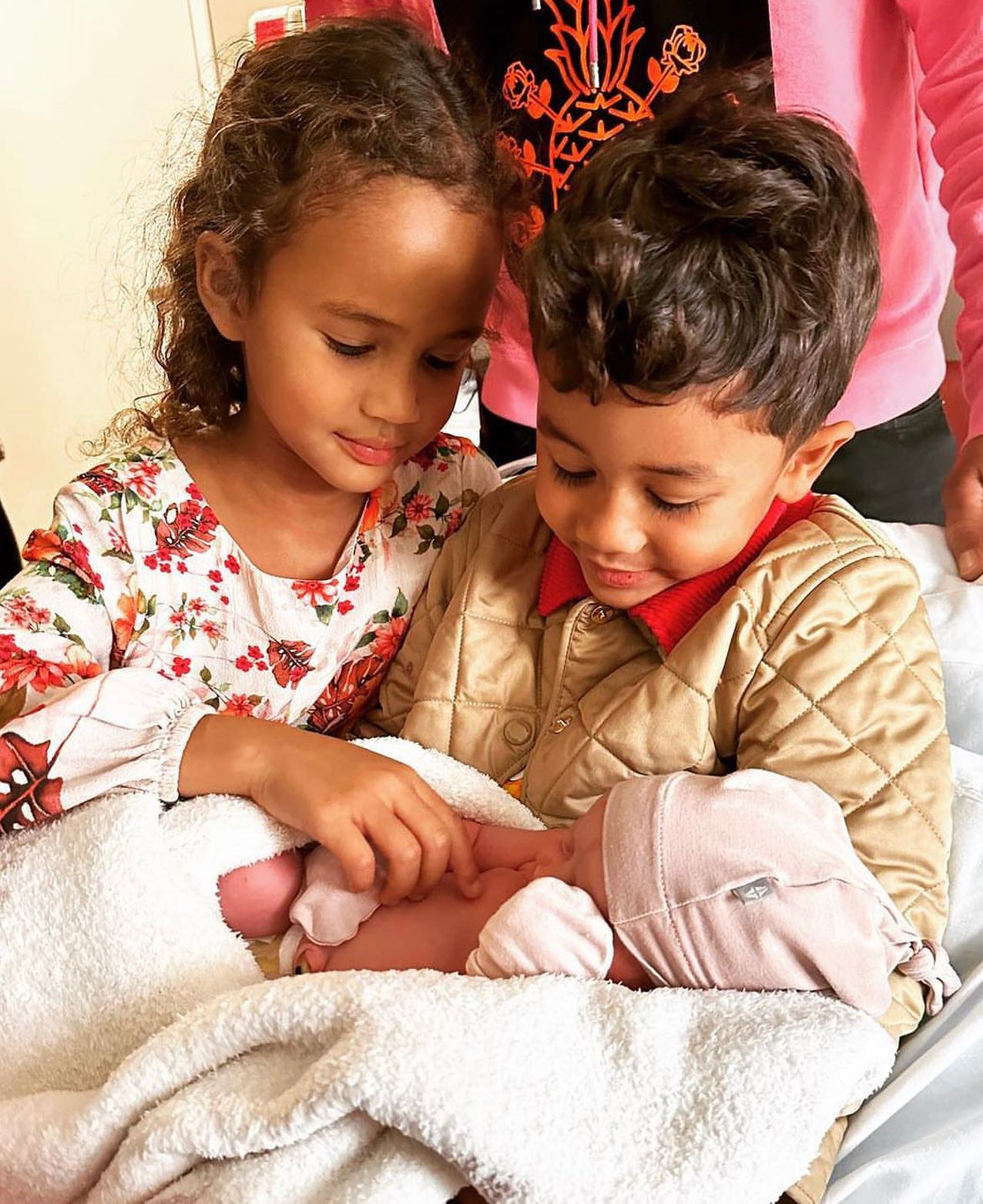 Legend continued: “I’m so, so grateful, but that doesn’t seem like a big enough word…”

The couple quickly received praise and well-wishes from fans and famous friends. “Aaaaaahhh!!!! Mazaltov!!!! Blessings to you and yours!!! Beautiful ❤️❤️,” Viola Davis commented, while Brooklyn Decker wrote, “You kids deserve it all. ❤️❤️❤️.”

Kris Jenner sent love to the Cravings founder, 37, and her husband, writing, “Congratulations we love you!!! 💕💗💕💗💕💗.”

Legend initially announced Esti’s birth on January 13 during a private concert. Teigen shared the same first photo of their baby girl via Instagram on Thursday, thanking her followers for their support.

“She’s here! Esti Maxine Stephens – the house is bustling and our family could not be happier 💕,” the former Lip Sync Battle cohost captioned the adorable pic. “Daddy sheds nightly tears of joy seeing Luna and Miles so full of love, and I am learning you still need diapers with a c section!? We are in bliss. Thank you for all the love and well wishes – we feel it all! X.” 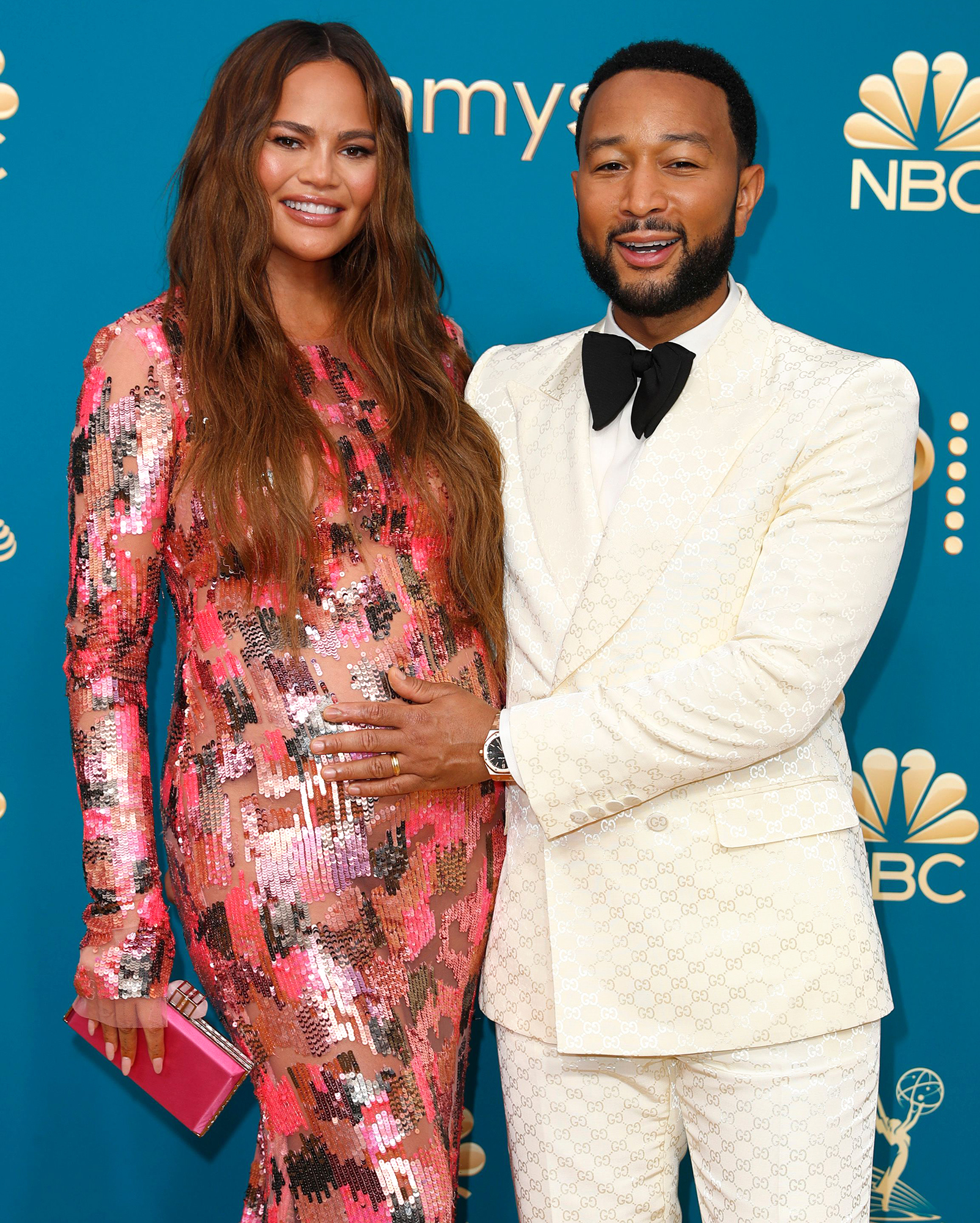 The Utah native announced her pregnancy in August 2022, sharing a glimpse of her baby bump in her social media reveal. Several months prior, Teigen told fans she was “balls deep” in the IVF process.

“I honestly don’t mind the shots, they make me feel like a doctor/chemist but the bloating is a bitch, so I humbly beg you to stop asking if I’m pregnant because while I know it’s said with excited, good intentions, it just kind of sucks to hear because I am the opposite of pregnant!” she explained via Instagram in February 2022.

Teigen and the “All of Me” crooner tied the knot in 2013 and welcomed Luna three years later. Miles joined the family in 2018.

The cookbook author announced two years later that she and Legend were expecting baby No. 3. Teigen suffered complications throughout her pregnancy that caused her to deliver the pair’s son — whom they chose to name Jack — stillborn at 20 weeks. She reflected on the September 2020 loss two years later, recalling the need for “medical intervention” as the situation became life-threatening.

“It became very clear around halfway through that [Jack] would not survive and that I wouldn’t either. … Let’s just call it what it was: It was an abortion,” she said during a September 2022 panel. “[It was] an abortion to save my life for a baby that had absolutely no chance. And to be honest, I never, ever put that together until, actually, a few months ago.”

Since losing Jack, Teigen and the EGOT winner have continued to keep his spirit with them — as have Luna and Miles.

“Whether we go on a vacation or something, they always say, ‘Don’t forget baby Jack.’ And then I have to pack him up,” the model told Scary Mommy in October 2021, referring to her son’s ashes. “And then we get to where we’re going, they’re like, ‘Oh, my gosh, he must be thirsty.’ This might sound crazy to people, but they’ll put a little glass of water next to his little box of ashes. And they really love being a part of it.”