Former foreign minister Julie Bishop has admitted toeing the Coalition’s party line on gender and merit while she was the only woman in Tony Abbott’s cabinet, even as qualified women were excluded from the most powerful political grouping in the nation.

Ms Bishop made the comments on ABC TV’s Ms Represented, which begins airing Tuesday next week. Howard government immigration minister Amanda Vanstone describes Mr Abbott as “probably a misogynist” but nevertheless suggests that wasn’t a factor for why he spoke at a rally attacking then-prime minister Julia Gillard’s emissions policy in front of signs branding her a “witch” and “bitch”. 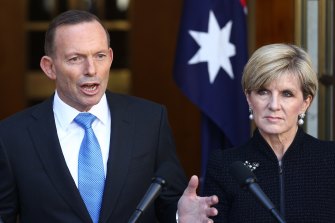 “He’s not sort of a new age man, let’s put it that way,” said Ms Vanstone, who is now a columnist for The Sydney Morning Herald and The Age. “But I don’t think he’s set that [situation] up. He’s just the guy who is there at the time.”

Ms Bishop gained the position in Tony Abbott’s cabinet when she was elected deputy leader of the Liberal Party and therefore could select her own role. The lack of other women disappointed Mr Abbott, he said at the time, but there were “very good and talented women knocking on the door”. Ms Bishop did not criticise the process at the time.

Asked by host Annabel Crabb what she had been thinking, Ms Bishop was candid. 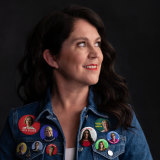 “Don’t slip up, keep a straight face, and keep saying that we choose our ministers on merit knowing that there were a number of very competent women who didn’t have the opportunity to serve at that time because they hadn’t been chosen,” she said.

There are now eight women in cabinet.

Ms Represented tracks the experience of women in Australian politics across generations, charting the pressure to conform to dress standards (more cardigans, less Armani, Ms Bishop was told by a member of John Howard’s staff in 2003) and maternal ideals.

Crabb said most women approached by the program were eager to participate in a historical chronicle of women’s progress in politics and hardships along the way, even those who had not emphasised their gender during their careers for fear of being defined by it.

Many of the current and former politicians she spoke to were the first women to hold various senior positions in Australian politics, including Ms Gillard, Penny Wong, Marise Payne, Bronwyn Bishop, Cheryl Kernot, Kathy Sullivan and Ros Kelly. Pauline Hanson declined to participate.

It airs after former Liberal MP Julia Banks has written a new book describing a brazen and unwanted sexual advance by a minister, as well as revelations of an alleged rape in Parliament House by a former Liberal staffer and other recent claims of inappropriate behaviour by government ministers.

Crabb says those scandals had changed expectations in Canberra: “There is now much more of a settled expectation that it’s appropriate to discuss this stuff.”

Politicians across the spectrum, including in Labor and the Greens, recount feeling invisible as men take credit for their ideas. They also describe disturbing conduct in Parliament.

Greens Senator Sarah Hanson-Young tells the story of former Liberal turned Conservative senator Cory Bernardi’s interruptions of a speech in Parliament in 2014. Senator Hanson-Young, who has previously described the incident in her book, was speaking on asylum seeker policy when Mr Bernardi began heckling.

He then moved closer and closer to her as the late-night sitting wore on, eventually sitting almost next to Senator Hanson-Young, where he whispered “creepy” nursery rhymes and listed the names of men, insinuating the Senator had slept with them. When Senator Hanson-Young snapped and said there should be breath testing for senators, she was disciplined by the chair of the debate, though Mr Bernardi was also told to be silent. He now has a show on Sky News.

Mr Bernardi said in 2018 he could not contemplate whispering anything in Senator Hanson-Young’s ear and accused her of “re-writing history”.