Nick Jonas made his ‘SNL’ hosting debut! He opened the show with a hilarious opening monologue and had a little help by older brother Kevin in the audience.

Nick Jonas may have just had the best opening monologue on Saturday Night Live this season! The “Jealous” singer walked out in a bright orange jacket with long pockets as he expressed just how thrilled he was to be there. His older brother Kevin Jonas, 33, hilariously popped up in the audience with a burning question for the younger JoBro. “Hey Nick, I am so excited to be here. And I gotta ask — are we good?” Kevin began. “Because I see you’re doing a lot of solo stuff? Are we still a band?” he asked. 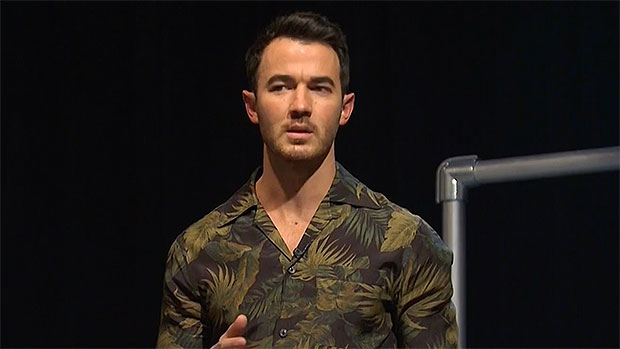 Nick assured Kevin — who married wife Danielle back in 2009 — that all was hood in the neighborhood. “Yes, the band is still together,” he replied. “Are you sure, because I just bought a house?” a worried Kevin went on, referencing his New Jersey mansion that he purchased back in 2020. The 33-year-old then delivered the best line of the entire monologue: “And just one question. ‘MMMbop — was that us?” he asked. “MMMBop” just so happens to be the smash 1997 single from the Hanson Brothers — not the Jonas Brothers — but fans have often compared the groups over the years!

Nick was confirmed to be both host and musical guest on the Feb. 27 episode during Regé-Jean Page‘s episode the week before. “A dream come true. Let’s get it @nbcsnl!! See you February 27th!” the 28-year-old tweeted after the exciting news dropped. Nick has had the opportunity to take the stage at Studio 8H in the past: back in 2016, he was booked as musical guest during an episode hosted by Julia Louis-Dreyfus. Wife Priyanka Chopra, 38, was so thrilled for Nick’s milestone she sent him a huge balloon bouquet to celebrate! “So, this happened…” Nick said in a selfie-filmed video posted to social media, turning his camera around to show off the balloons that read “SNL” and “Congratulations, Nick.” How sweet! “That’s pretty cool. Thank you, babe!” he noted as he showed off the rest of the Instagram-worthy display.

Nick also documented the experience of prepping for the show on social media. “I’ve just arrived in beautiful, snowy New York for SNL week,” he confirmed in another video shared to social media on Feb. 22. “Let’s so this!” he excitedly added. Fresh off his hosting announcement, Nick also surprised his fans with something they’e been waiting for: brand new music! The New Jersey native dropped his sexy new single “Spaceman” last week, and is set to perform the track (which he co-wrote) on the NBC sketch series for the first time.

“So excited to start this journey with all of you. I made this album while doing what most of us have been doing this past year, sitting at home and hoping for better days ahead,” he tweeted on Feb. 25, revealing Spaceman is also the name of his next project. “There are four themes we will explore on the album…Distance. Indulgence. Euphoria. Commitment,” he wrote, seemingly alluding to inspiration from his two-year marriage to Priyanka. “Most of the songs are pretty much just love letters [to her], which when I can’t articulate the way I feel with my words with no music, I go to the studio,” he confessed last week to Apple Music host Zane Low.