"I can be triggered at home."

It’s safe to say that Chris Colfer will not be taking time to see Lea Michele’s “Funny Girl.”

While appearing on Tuesday’s episode of “The Michelle Collins Show,” the 32-year-old actor aired his feelings about his former “Glee” co-star and her new gig replacing Beanie Feldstein in the classic Broadway show “Funny Girl.”

When Collins asked Colfer if he would consider joining her for an evening performance of the show in New York City, the Golden Globe winner made a hard pass.

“Oh, no, are you seeing Funny Girl?” Colfer asked while Collins nodded in laughter. “Oh. My day suddenly just got so full. I saw Six last night, and that was amazing.”

“So, you’re not seeing [Funny Girl] is my guess, while you’re in town?” the 41-year-old TV personality asked, to which Colfer confirmed, “No, I can be triggered at home.”

Chris’ jabs towards Lea come two years after fellow “Glee” actress Samatha Ware accused Michele of making her entire experience as part of the show’s cast “a living hell,” saying she faced “traumatic microagressions” from the actress. At the time, more of their co-stars weighed in, with Heather Morris agreeing Michele was “unpleasant” to work with.

In addition to Morris, Amber Riley and Alex Newell quietly expressed their support by liking a series of memes that encouraged Ware to speak her truth.

Michele apologized at the time via Instagram, saying she “clearly acted in ways which hurt other people” and said she would step away and take time to “reflect” on her “shortcomings.” She also welcomed a child at this time in August 2020. 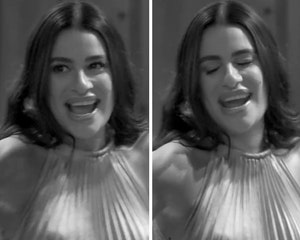 When asked about those allegations, Michele shared some of what that reflection led to. “I really understand the importance and value now of being a leader,” she said in an interview with The New York Times last month.

“It means not only going and doing a good job when the camera’s rolling, but also when it’s not. And that wasn’t always the most important thing for me.”

She wouldn’t discuss any specific allegations, saying that she didn’t feel “the need to handle things” through the media. But she did say that how she was on the set was a result of her particular work ethic.