Twin sisters who featured as a Nazi-pop duo in a 2003 Louis Theroux documentary left BBC viewers feeling ‘moved’ as they revealed how they have ‘unlearned’ their mother’s right supremacist teachings.

Lamb and Lynx Lennon Lingelser, now 28, starred in 2003 documentary ‘Louis and the Nazis’, where they were introduced as hate-spouting white supremacist folk group, Prussian Blue.

But nearly 20 years later, the filmmaker revisited the pair for BBC2 documentary ‘Louis Theroux Beyond Belief’, which aired last night.

In the episode the sisters explained their hatred towards ethnic minorities was entirely ‘taught’ behavior, and say that while they are no longer ‘angry and resentful’ towards their racist mother, they ‘pity her’ for skewing their beliefs.

They added they are ‘so separate’ from the ‘little girls’ who were made to sing hateful songs. 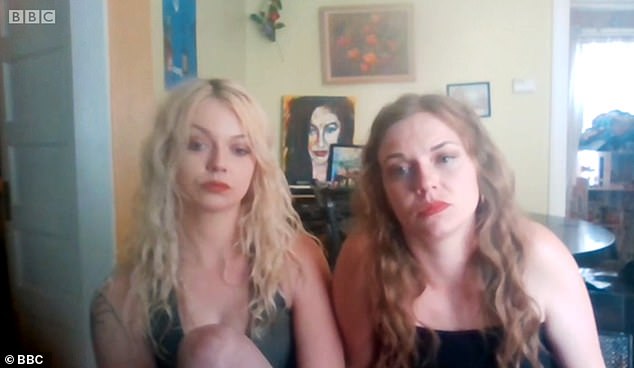 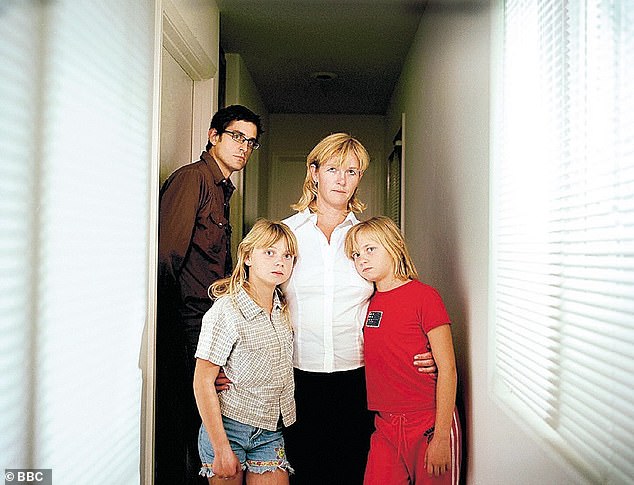 Lamb and Lynx Lennon Lingelser (pictured right in 2003), now 28, who live in Montana, starred in documentary ‘Louis and the Nazis’, where they were introduced with their mother April (pictured right) as hate-spouting Nazi-pop folk duo, Prussian Blue

The transformation left viewers feeling emotional, with one saying it was clear the girls had grown into ‘lovely’ young women, pictured

The transformation left viewers feeling emotional, with one saying it was clear the girls had grown into ‘lovely’ young women.

Lamb and Lynx have both moved over 1,300 miles from their home in Bakersfield, California to Montana – and Lamb is now married and has given birth to her first child. 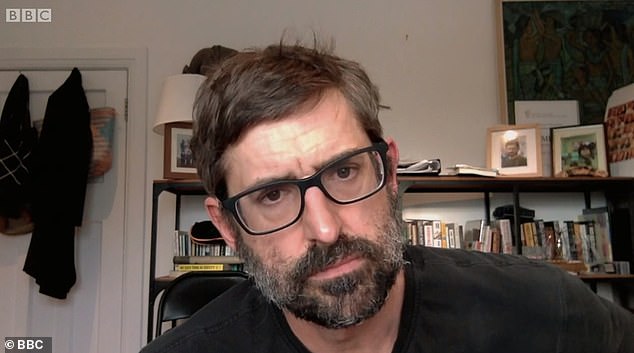 When asked by Louis whether they are angry about being fed hateful beliefs from such a young age, Lamb said: ‘Not anymore.

‘When we were teenagers there was a lot of resentment and anger and blame on my mum, but now it’s just pity. Those little girls were so separate from what we are now,

Lynx continued: ‘We were very removed, even watching it now, it’s very hard. We didn’t comprehend and understand fully, how controversial those topics are.

‘Racism and those beliefs, they are learned and they can also be unlearned and untaught.’ 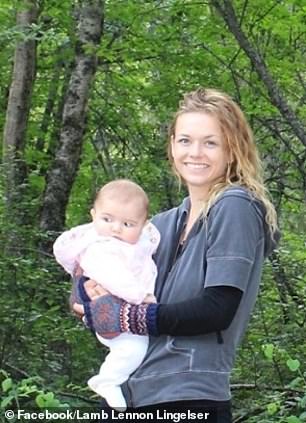 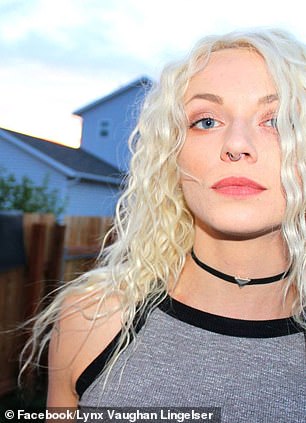 The pair were just 11 when Prussian Blue rose to fame, and have previously claimed their namesake was inspired by their German heritage and blue eyes.

However, Prussian Blue is also a name used for the residue left by Zyklon B, a poison used by Nazis to gas Jewish people during the holocaust.

In his original documentary, Louis introduced viewers to their mother April – a member of racist fringe groups such as the National Alliance and the National Vanguard.

The mother home-schooled her daughters in the hope that they would focus all of their energy into their singing act.

‘They’re going to be an example,’ she said in the documentary. ‘And show how being proud of your race is something that would be very appealing to teenage girls. 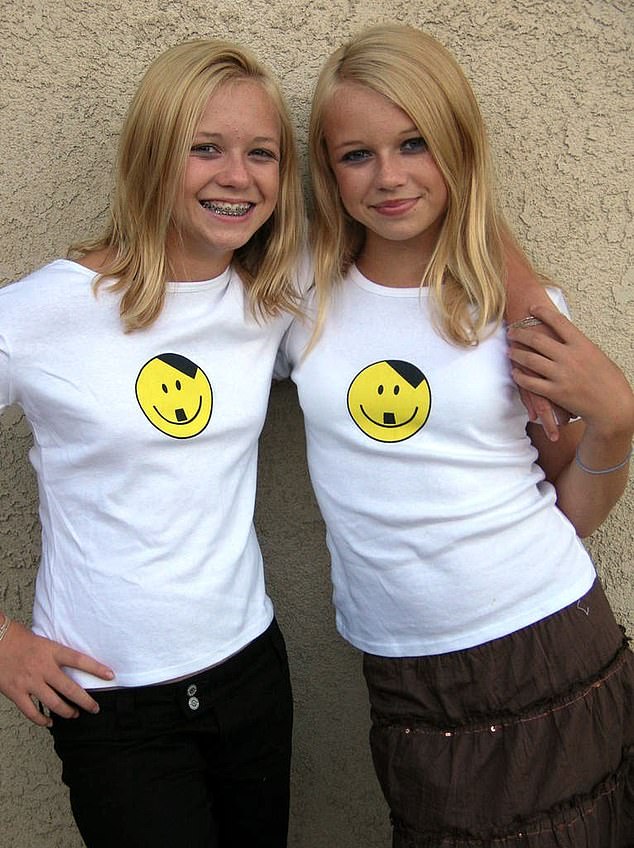 In 2005, the pair (pictured) were snapped in smiley-face Hitler T-shirts and in the same year they donated money to victims of Hurricane Katrina – but insisted it go to whites only

‘What red blooded American boy isn’t going to find two blonde twins 16-years old, singing about white pride and pride in your race [unappealing]?, very few are not going to find that appealing.’

The pair were given a computer game to play, provided by the National Alliance,  called ‘Ethnic Cleansing’, in which a Nazi skinhead goes through a town and shoots ethnic minorities.

Later, Louis met their grandfather, Bill Gaede, who had a swastika on his belt buckle, painted on his truck and even branded into his cattle.

He was seen quizzing Louis on the ethnicity of his wife, telling him he should be ‘preserving the white race’. 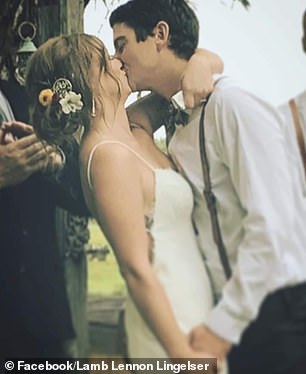 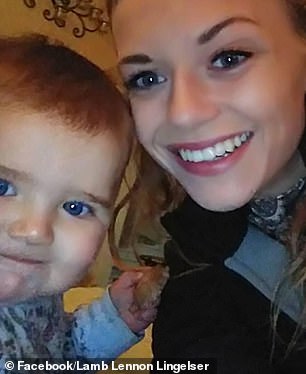 The twin sisters explain that their hatred towards ethnic minorities was entirely ‘taught’ behavior and say they ‘pity their mother’. Pictured, Lamb on her wedding day (left) and posing with her first child (right) 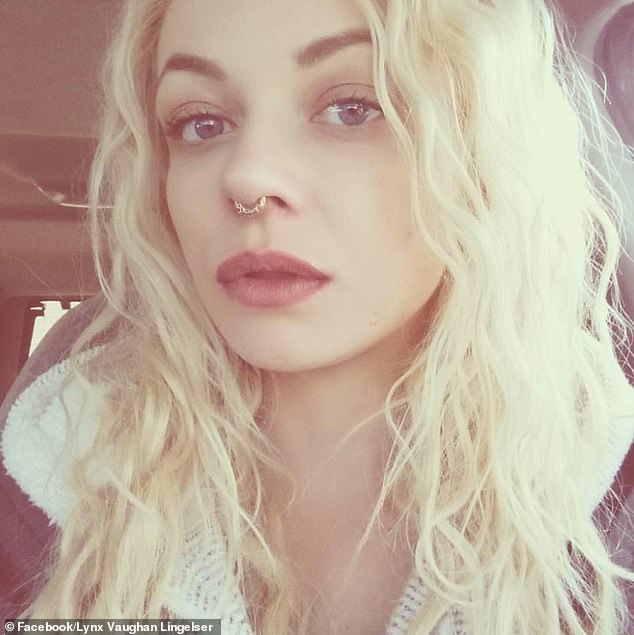 By the time the twins were 13, in 2006, Prussian Blue had recorded a roster of hateful songs, with titles including ‘Aryan Man Awake’ and an album called, ‘For The Fatherland.’

Another one of their tunes was called ‘Hate For Hate: Lamb Near The Lane,’ co-written by David Lane – the late member of terrorist group The Order – and Lamb’s then pen-pal.

Lane was ten serving 190 years in prison for his involvement in the murder of Jewish talk show host Alan Berg in 1984.

In 2005, Lamb and Lynx were snapped in smiley-face Hitler T-shirts and in the same year they donated money to victims of Hurricane Katrina – but insisted it go to whites only.

However, in 2012, at the age of 20, Lamb and Lynx radically transformed themselves, and ditched their hateful beliefs – crediting medical marijuana for changing their mindset. 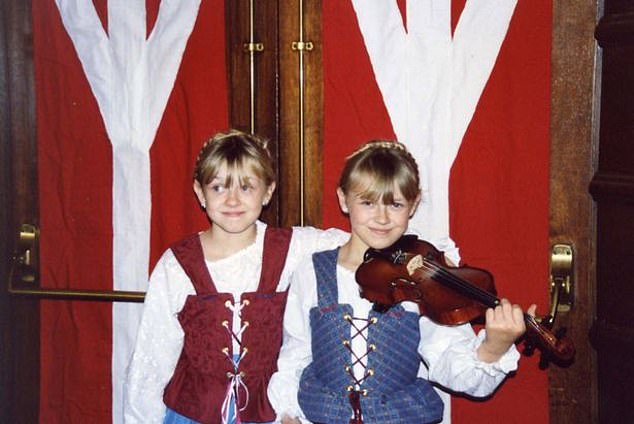 By the time the twins were 13, in 2006, Prussian Blue (pictured) had recorded a roster of hateful songs, with titles including Aryan Man Awake 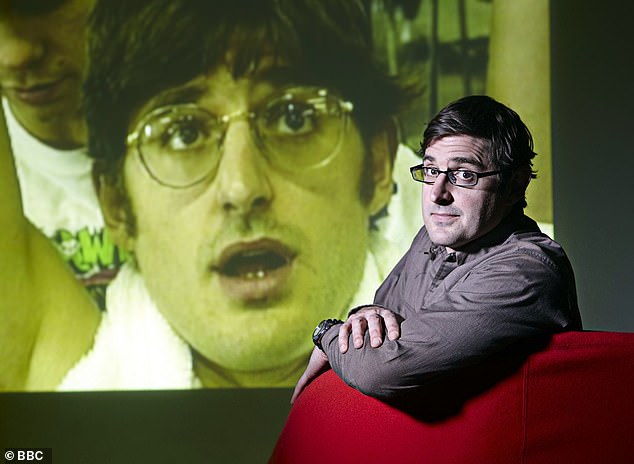 Louis Theroux Beyond Belief: Life on the Edge sees him revisit the stories of those he’s interviewed over the last 25-years and airs Sunday on BBC2 at 9pm

Lynx was diagnosed with cancer during her first year of high school and doctors removed a tumor from her shoulder.

She was prescribed OxyContin and morphine to deal with the pain. She also suffers from a rare condition called cyclic vomiting syndrome. She began smoking to ease withdrawal symptoms and nausea.

Lamb, who suffers from scoliosis and chronic back pain, leading to emotional stress, soon acquired a medical marijuana card of her own.

‘I have to say, marijuana saved my life,’ Lamb told the Daily Mirror in 2012. ‘I would probably be dead if I didn’t have it.’

‘We just want to come from a place of love and light,’ Lamb said, adding, ‘I think we’re meant to do something more – we’re healers. We just want to exert the most love and positivity we can.’