Louis Vuitton has come under fire online for selling a scarf that looks like a traditional Palestinian keffiyeh.

Eagle-eyed fans saw that the French fashion brand was selling a scarf for $705 on its US e-store that looked just like the traditional Middle Eastern head scarf.

Many took to social media to call out the brand for cultural appropriation, and what’s more for producing the keffiyeh in blue and white – the colours of the Israeli flag –  right after a period of violence and tension between Israelis and Palestinians in May. 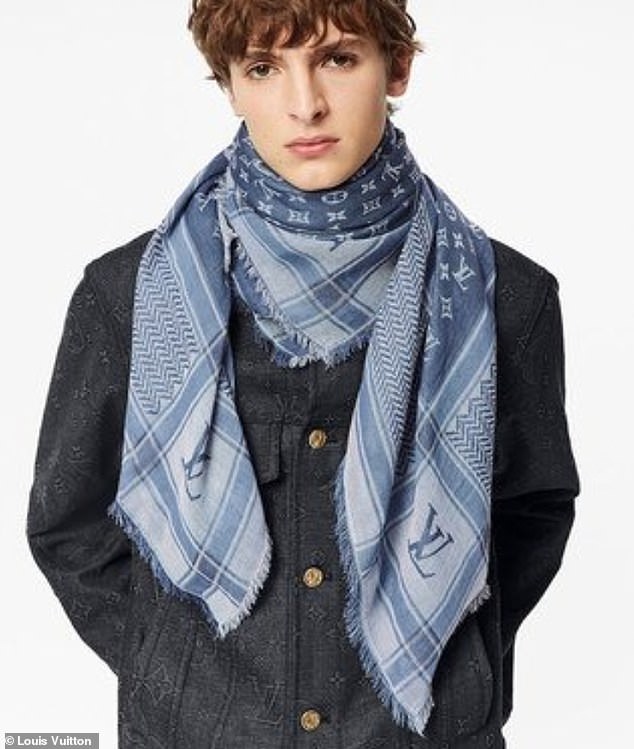 French fashion house Louis Vuitton has been criticsed online for selling a $705 scarf on its website inspired by the Middle Eastern keffiyeh scarf, usually black and white and seen as a symbol of Palestinian nationalism. The designer version, which has now been removed, came in blue and white, the colours of the Israeli flag

The scarf has been taken down from the site following the controversy online, but was described as a ‘Monogram keffieh stole’ retailing for $705 (£497.66).

The Independent reported that the accessory was described as ‘inspired by the classic keffiyeh and enriched with House signatures,’ on the Louis Vuitton website.

‘A jacquard weave technique is used to create the intricate Monogram patterns on its base of blended cotton, wool and silk.

‘Soft and lightweight with fringed edges, this timeless accessory creates an easygoing mood,’ the description went on. 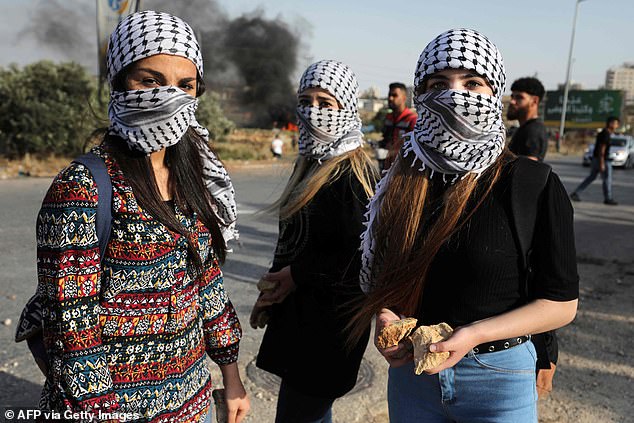 Online, people criticised for being tone deaf and trying to capitalise on Palestinian culture with the keffiyeh

Shaped into a square, folded into a triangle and wrapped around the head or the neck, the traditional keffiyeh is an Arab headscarf that’s usually black and white.

Since the Arab revolt of 1936-1939 in Palestine, the headdress has become a symbol of Palestinian nationalism.

However, Louis Vuitton’s critics have said the brand was being ‘tone deaf’ with the accessory, pointing out that the blue and white echoed the colours of the Israeli flag.

This comes after a period of high tension and violence between Israelis and Palestinians in Jerusalem in May in which two weeks of violent conflict left at least 250 people dead, most of them Palestinians.

In the fighting, Israel unleashed hundreds of airstrikes against militant targets in Gaza, while Hamas and other militants fired more than 4,000 rockets toward Israel. 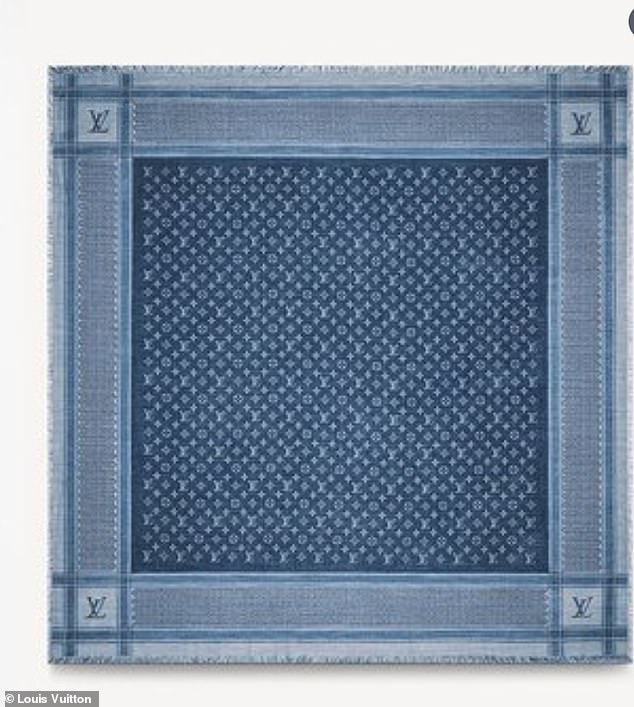 ‘So LVMH’s stance on politics is “neutral,” but they’re still making a $705 logo-emblazoned keffiyeh, which is a traditional Arab headdress that’s become a symbol of Palestinian nationalism,’ DietPrada wrote.

On May 21, Diet Prada quoted an anonymous LVMH employee as saying: ‘LVMH’s stance on politics is neutral,’ in relation to rumours the group was preparing to drop model Bella Hadid after she was critical of Israel in a series of social media posts.

The model retained her contract with the luxury brand, which DietPrada said was a sign fashion’s attitude to social issues was changing.

However, the addition to the Louis Vuitton collection was not well received by fans.

‘They could have designed a regular scarf, I’m not sure why they felt the need to specifically take from someone else’s culture?? It’s not even an innocent mistake or coincidence, they know where it comes from,’ one critic said.

‘These companies are deaf to so much. Stop monetizing people’s culture,’ said another.

‘I mean are we even surprised at this point,’ another said.

‘Louis Vuitton says they are politically neutral yet they are getting profits from the sale of this $705 keffiyeh inspired scard usually worn by the Arabs and a sumbol of Palestinian nationalism. And the color, is that some of form of passive political commentary?’, another asled. 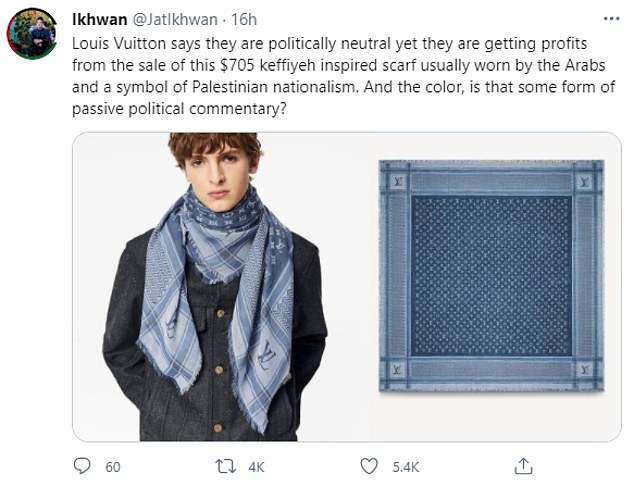 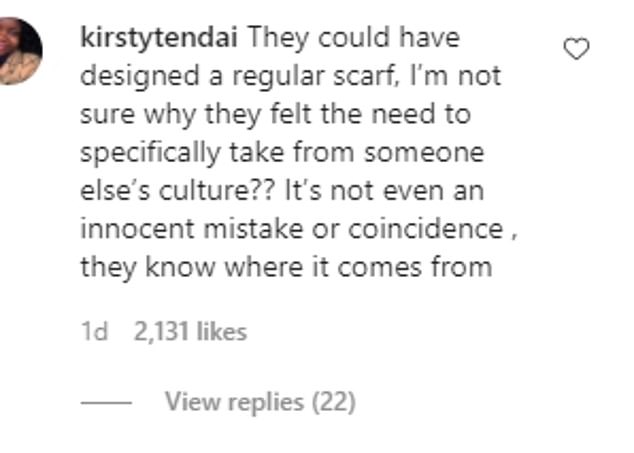 Online, many said the keffiyeh was a very poor choice and that Louis Vuitton should have gone for a normal scarf