The lack of support — in more ways than one — is what first opened Tamara Hill-Norton’s eyes to the gap in the sportswear market from which she would go on to make her name.

‘I used to hate shopping for exercise clothes on the High Street,’ she recalled. ‘You would go in and it would just be staffed by young boys who only knew about football stuff, and the women’s section was a pathetic little offering at the back where the tops wouldn’t match the bottoms.

‘I used to wear leggings and a big T-shirt to aerobics classes and stand at the back thinking: ‘God, I look horrible’.’

And the final straw? ‘Having to ask a male school-leaver which sports bra he recommended.’

But it would be out of these frustrations that a revolution would be born — a revolution that saw bottom-sculpting, figure-hugging active wear become a staple not just of the gym but of everyday life.

Encouraged by the growing keep-fit culture in the U.S., in 1998 the then 26-year-old Tamara and her husband, Simon, opened a shop in Notting Hill, West London. Its somewhat unglamorous name? Sweaty Betty — so called after the 1960s comic book character Betty Cooper, a musician in a U.S. garage band.

‘I wanted to challenge the notion that it’s not cool to sweat,’ Tamara would explain. ‘Who cares if you’re a Sweaty Betty? So I took the ultimate cool chick Betty, juxtaposed this with Sweaty and we had it.’

The night before their first outlet — located next to a pawn shop — was due to open, the only staff member quit, meaning it was all hands on deck for the founders.

As both came from sturdy Royal Navy stock — Simon’s father is a Vice-Admiral and his grandfather Admiral of the Fleet — neither was afraid of hard work. 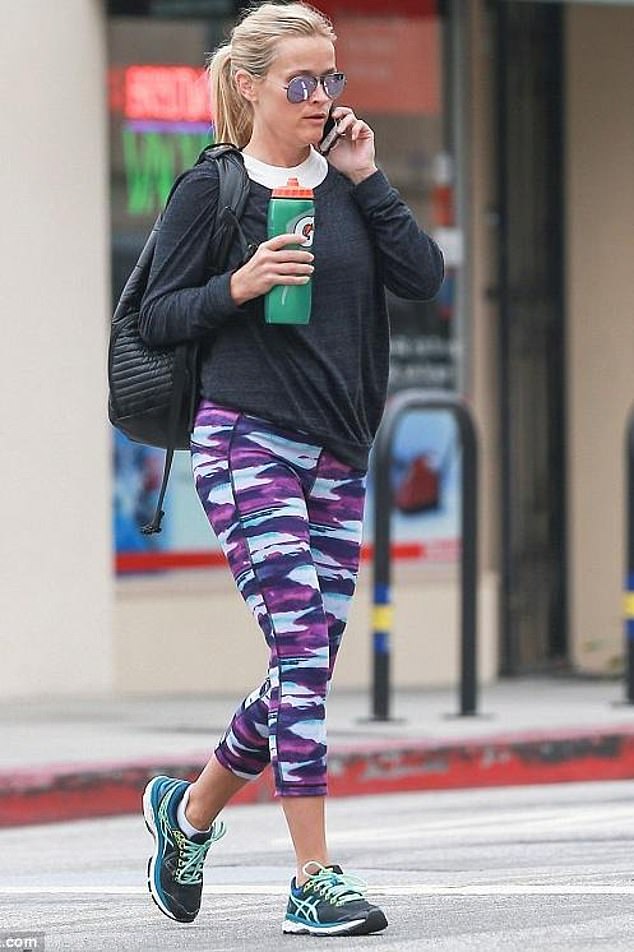 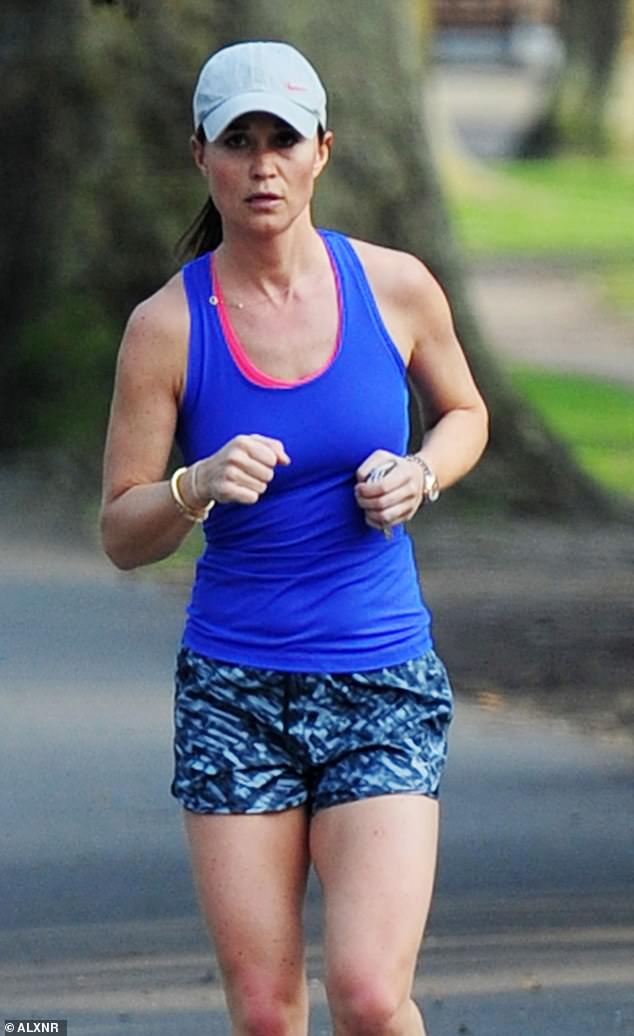 In January, Sweaty Betty revealed that despite its physical stores being closed during lockdowns, it had experienced higher sales, with triple-digit digital growth and total revenues up 60 per cent. Pictured: Pippa Middleton in Sweaty Betty

And in the two decades that have passed since, their vision has paid off in spades. First the brand expanded here as its look was adopted by gym-bunnies and yummy-mummies and then by a generation of Lycra-loving ladies willing to splash out £85 on a pair of colourful leggings that look good whether working out, walking the dog or just having coffee with friends.

Today, as well as a successful online presence, the brand has 60 stores across the world, with concessions in a number of major department stores, including Selfridges and Harrods in the UK. Its popularity has been further buoyed by celebrity endorsement.

Everyone from actresses Reese Witherspoon, Halle Berry and Jessica Alba to Pippa Middleton, younger sister of the Duchess of Cambridge, has been pictured wearing the firm’s clothing range.

Now the Sweaty Betty success story has served up a hefty pay cheque to the Hill-Nortons, with the announcement that the company had been sold for £300 million to U.S. footwear and lifestyle group firm Wolverine Worldwide.

Although no precise details are known, the deal could bring a substantial pay-out for 50-year-old Tamara and 54-year-old Simon.

They still own a small stake alongside the majority investor, L Catterton, the private equity division of Bernard Arnault, boss of LVMH, the luxury goods group — and Wittington Investments, the billionaire Weston family’s investment arm, which owns Associated British Foods.

Tamara and Simon said in a statement this week: ‘We founded Sweaty Betty in 1998 with the purpose to empower women through fitness, and today we are delighted to have found the right partner in Wolverine Worldwide, a company that is perfectly positioned to support the acceleration of our mission.

‘We’re so proud to have built an incredible community of active women who inspire us daily, and are excited to see this powerful, supportive community grow worldwide.’ 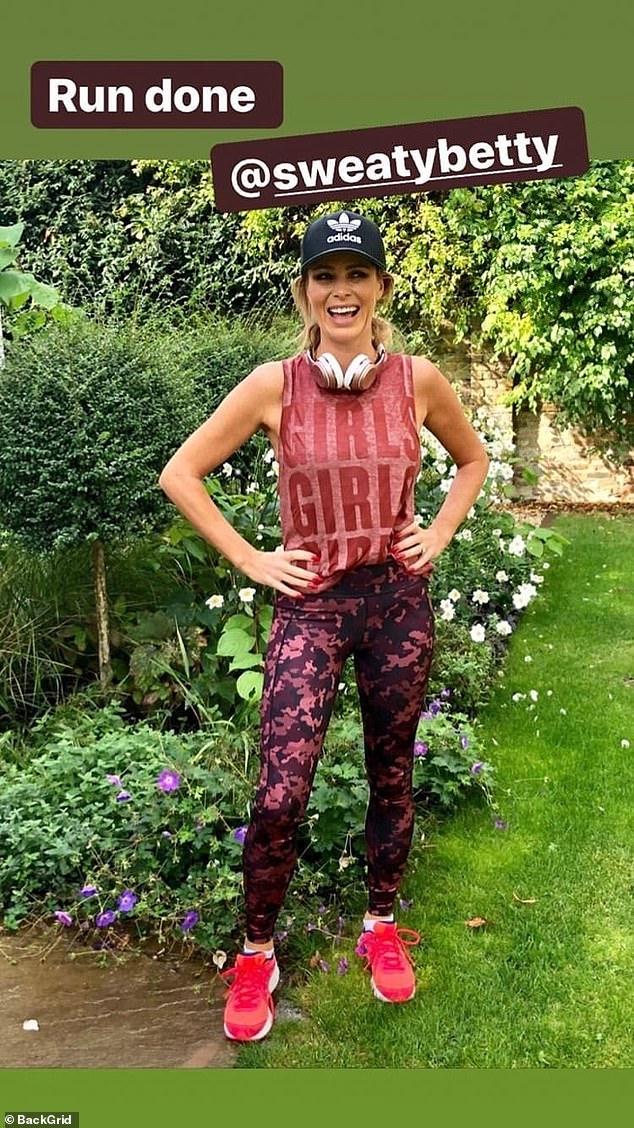 The brand was founded when Tamara Hill-Norton was frustrated with the lack of work out clothes for women on the high street. Pictured: Amanda Holden in Sweaty Betty 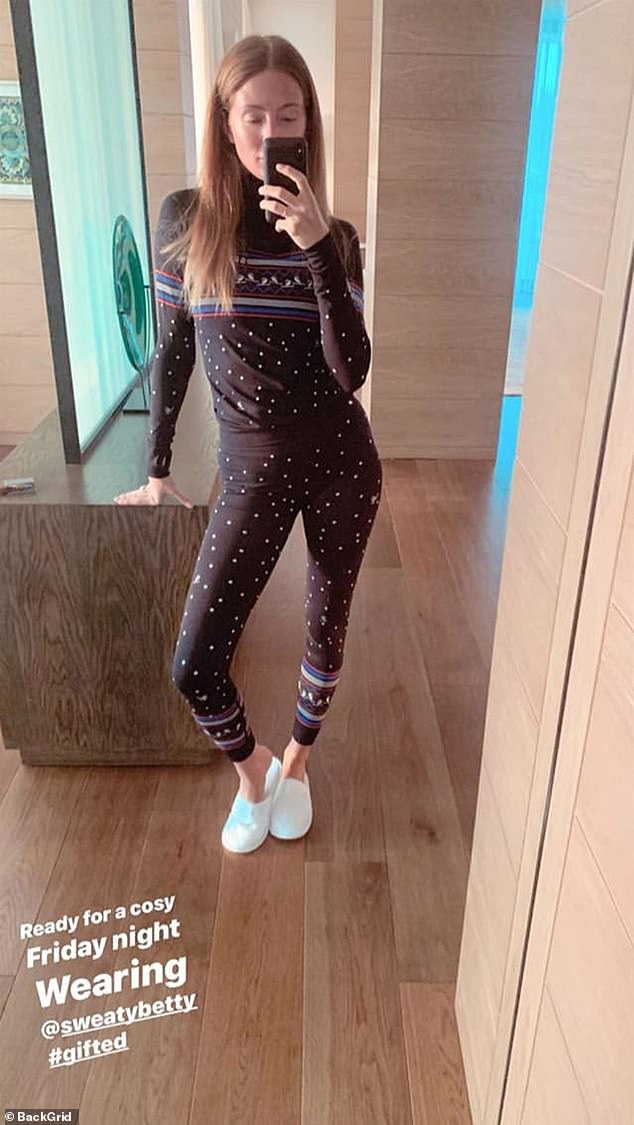 The brand’s popularity has been further buoyed by celebrity endorsement. Pictured: Millie Mackintosh in Sweaty Betty

Intriguingly, Sweaty Betty has continued to expand not just in spite of the problems that have beset the world over the past 18 months, but partly because of them.

With millions working from home, the popularity of so-called athleisure wear has soared — the phrase refers to casual, comfortable clothing designed to be suitable both for exercise and everyday use.

In January, Sweaty Betty revealed that despite its physical stores being closed during lockdowns, it had experienced higher sales, with triple-digit digital growth and total revenues up 60 per cent.

There was also growth a year earlier, with accounts showing turnover up more than a quarter to £80 million in 2019.

As ever, bestsellers include its range of leggings designed to ‘flatter those bits of the thighs that women hate, and lift and sculpt your bum’.

The firm and its new owners believe the athleisure trend is set to expand as brands look at ways for sporty clothing to double for the office.

In an interview last month, Julia Straus, CEO of Sweaty Betty, said the company has been preparing for a new world of work, sport and play.

‘Health, wellness, fitness are not going to go away,’ she said. ‘This category is the future.’ She added that Sweaty Betty has been developing ‘hybrid’ clothing as workers prepare to split their time between working at home and at the office.

‘We’re asking ourselves what the ‘new normal’ is going to look like post-Covid, and we’re looking at versatile products — trousers you can wear for cycling and to the office, or yoga leggings you can also wear to work,’ she said.

Back when the company launched, customers’ needs were much simpler. At the time female active wear was dismissed as the ‘shrink it and pink it’ sector — meaning manufacturers simply took men’s clothes and shrunk and dyed them before selling them to women.

But while working as a buying assistant with Knickerbox after leaving university, Tamara had come across a new U.S. sportswear brand that had a very different approach.

‘I’d never seen anything like it,’ she said. ‘It was all bright colours and it wasn’t designed for men and then transformed for women.

‘I was just like, ‘Wow, this is incredible!’ and thought: ‘This is a real gap in the market.’

Helped by her husband, who was working in finance, the pair drew up a business plan and raised funding to create a brand to target young women who had active lifestyles. To begin with, the company sold clothing made by other sportswear companies and offered in-store fitness classes, aiming to build a community feel to the business. 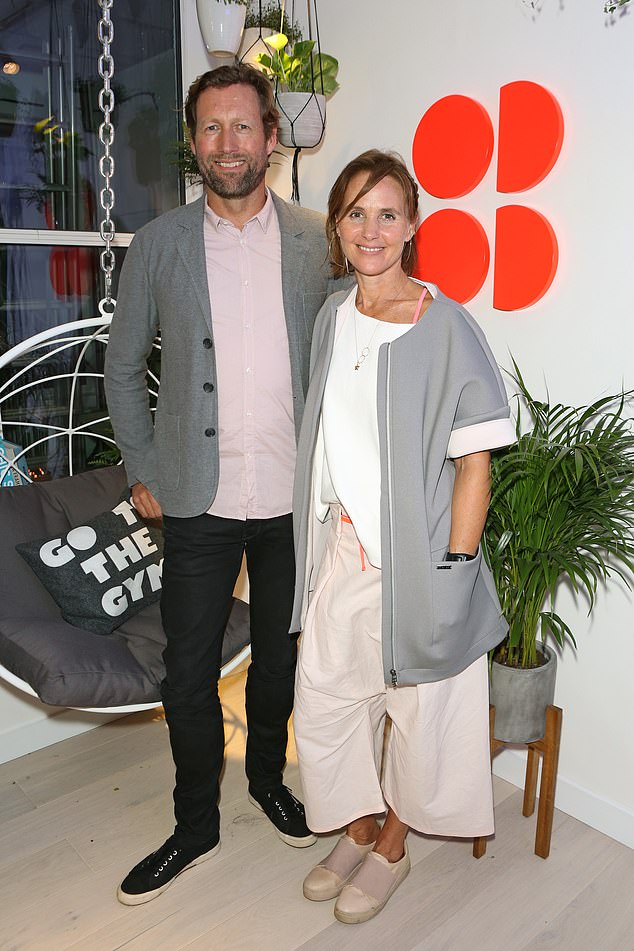 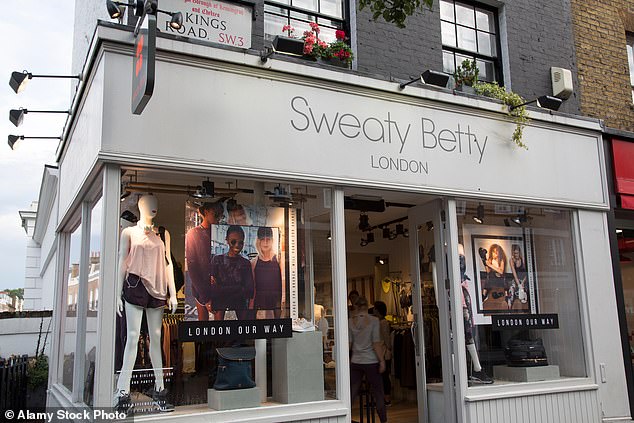 The brand has 60 stores across the world, with concessions in a number of major department stores, including Selfridges and Harrods in the UK. Pictured: A Sweaty Betty shop on London’s Kings Road

In 2008 they shifted to selling their own-brand products, designing clothing that tapped into the growing trend to wear sportswear in everyday life.

Sales were boosted by the London 2012 Olympics, which saw a limited edition ‘God Save The Queen’ collection feature in Vogue and Union Jack leggings that sold out. The following year the company opened its first U.S. store.

Of course, running a company such as Sweaty Betty puts extra expectations on those who are behind it. Fortunately, the Hill-Nortons are keep-fit fanatics.

According to a profile on the company’s website, Tamara’s favourite exercise is to run down the Thames from the family’s home in the leafy West London suburb of Acton to Hammersmith Bridge.

She also cycles half-an-hour from the company’s office in Putney three days a week, and regularly takes part in group runs with her staff. Employees are known as ‘Betties’ and are rewarded with occasional team outings to Cornwall for surfing trips and cream teas.

The couple have three children, Daisy, Honor and Luke. Daisy, the eldest, runs her own fashion business using reworked denim, and regularly posts snaps on social media from sun-soaked locations around the world.

She also shares surfing pictures from West Wittering in West Sussex, the exclusive seaside enclave where the family owns a seven-figure second home, complete with swimming pool. Other local residents include actress Kate Winslet, Keith Richards of the Rolling Stones and West End musicals star Michael Ball. While there, sailing, kayaking and paddle-boarding are thrown into the keep-fit mix.

‘At the weekend we get away to our house in West Wittering as much as possible,’ Tamara said in an interview several years ago. ‘We live a very active lifestyle, so we’ll often do water-sports or go for a run down the beach. I then like to relax with food from my husband’s amazing vegetable garden and a home-made Negroni.’

The only blot on the couple’s idyllic-sounding life came courtesy of a fall-out with one of their neighbours in West Sussex — a saga dubbed The Bore War.

The dispute arose when retired company director George Chapman applied for planning permission to build a 1.5m tunnel to connect the two halves of his garden, which is divided by a public footpath. 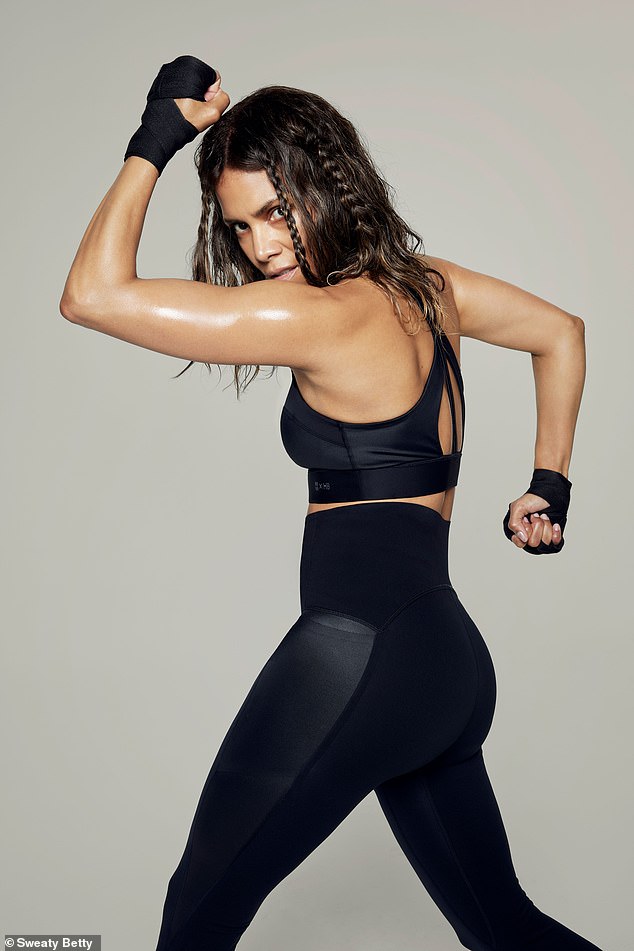 Pictured: Halle Berry in a campaign to promote her capsule collection with Sweaty Betty

Mr Hill-Norton and fellow neighbour Oliver Tress — who founded the home and fashion store Oliver Bonas, and whose wife, Gina Coladangelo, was recently revealed to be in a relationship with former Health Secretary Matt Hancock — objected to the plans.

They claimed the proposal had been dreamed up because the pensioner was too lazy to take ‘three steps across a public footpath’. Mr Chapman, 80, dismissed the objection as ‘bonkers’, telling the Mail: ‘This Mr Sweaty Betty has been stirring up a hornet’s nest.’

The plans were refused by Chichester District Council, but Mr Chapman lodged an appeal with the planning inspectorate which earlier this year overturned the decision.

Following the news of Sweaty Betty’s sale, a spokesperson for the company said that Tamara, who, until fairly recently, was its creative director, would ‘continue to support the brand’.

She will also remain chair of the trustees of the Sweaty Betty Foundation.

This was launched in March to inspire the next generation of women, funding initiatives designed to help teenage girls get active and stay active for life. Safe in the knowledge that those who do so will never struggle to find a suitable — and flattering — outfit to wear.

Whether sweating or not.