‘It’s clearly a cry for help’: Man blasted for putting CHEESE on his roast dinner – and people are begging his girlfriend to dump him

A man has been blasted for putting grated cheese on his roast dinner – with one person describing the meal as ‘clearly a cry for help’, and others telling his girlfriend to break up with him.

An anonymous woman, thought to be UK-based, posted an image of the unconventional meal, which she said was her boyfriend’s, on Reddit.

The image showed a plate of food containing what appeared to a piece of meat, a Yorkshire pudding, and a medley of vegetables. Topping the meal was a large quantity of grated cheese.

Captioning the image, the poster (from a now-deleted account) simply wrote: ‘can someone tell my why my boyfriend put CHEESE on his sunday roast?!’ 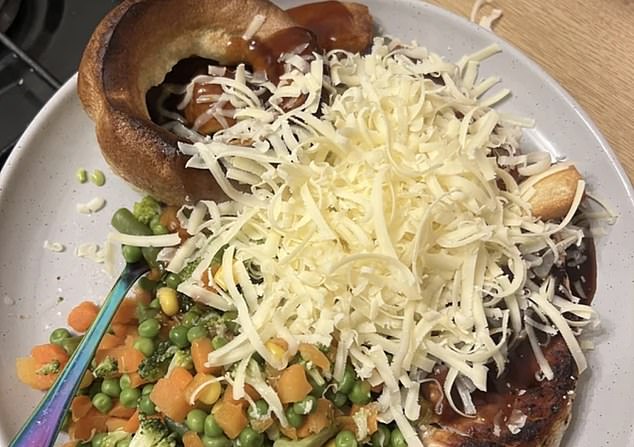 An anonymous Reddit user posted an image of this roast meal covered in grated cheese, prompting some strong responses

Many of those who responded to the post appeared just as baffled as the poster, with some having very strong views on the roast dinner and grated cheese combination.

One wrote: ‘It’s clearly a cry for help.’

Another added: ‘Hope you’re not too attached to your boyfriend because it’s time to dump him for this crime against humanity. Take all his cheese when you go.’

And another suggested that the meal was part of a strategy by the boyfriend to goad his partner into breaking up with him.

Some respondents seemed deeply troubled by the meal, which combined large amounts of grated cheese with a vegetable medley and Yorkshire pudding

They wrote: ‘He wants you to break up with him. You didn’t have a rabbit he could boil, so he went with the next most heinous thing he could think of.’

And another said she should break up with him, writing: ‘You need to take stock of your surroundings. Do you have a cellar? Check that he hasn’t fashioned it into some sort of Dexter-style kill room.

‘Garage? If you go in there and find pentagrams, leather bound tomes in unreadable alien script and Mr Blobby masks hanging up on hooks…RUN. Do not look back, do not pack your belongings, just get out of there while you still can.’

However, there were other respondents who actually thought the meal may work, with some saying the addition of cheese could be tasty, and others saying it may have improved the roast.

One wrote: ‘Because he wants to and can do what he likes with his food. Leave him to it, this is hurting nobody else.’

Another added: ‘I’ll never understand this strange superiority complex people get when they judge what other folks eat.’

For several respondents, the addition of cheese actually appeared to have improved the plate of food

Others agreed, saying the cheese looked like a positive addition to the meal they saw as otherwise underwhelming.

One said: ‘Masks the taste of the roast? Bad chef alert?’

A further Redditor agreed, saying: ‘Looks a tad on the dry side. Cheese might help lubricate?’

And another wrote: ‘I’d have it with the cheese instead of peas any day of the week…’