It's good to know there are some things you can always rely on. If you grew up in Adelaide in the '90s you knew The Mark of Cain for their pounding aural assault, their no-frills stage presence and John Scott's controlled vocals. At their sold-out show to mark 30 years since their debut album Battlesick, there was still a large fan base ready for more of the same. 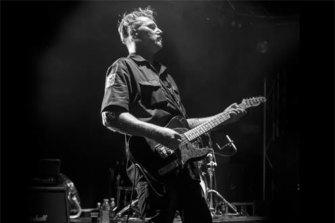 The Mark Of Cain’s John Scott on stage.Credit:

From the angry punch of album opener Wake Up to the roiling trauma of the title track to closer Summertime, it's clear the years have not dimmed the Scott brothers' signature formula. Kim remains steady and stoic on the bass; he barely changes position as he provides the bedrock for the wall of sound emanating from the band. Scott's vocals are not merely some wild, barbaric yawp into the void, but delivered with focused, concise rage and Joy Division-esque despair, while the military precision of current drummer Eli Green never falters. There's the odd brief, humorous aside from John – "this is where you turn the album over" – before the band gets back to business.

A short breather and then the "encore" set opens with the explosion of Interloper from second album Ill at Ease. Familiar Territory sees the crowd reach peak mosh and the melodic LMA with its pretty guitar intro is one of the highlights.

Of the two "sets", the second one was more enjoyable. Perhaps it was the unpredictability of not knowing what was to come next; maybe it was because however good or how loved the album is, it can only ever represent one facet of a band. Or it could simply have been the fact that cherry picking from five albums was always going to be more fun.

Can you describe The Mark of Cain as fun? A venue packed with thrashing limbs, banging heads and blissful, sweaty faces argues yes.