My landline doesn’t get hacked or stolen – and NEVER vibrates in my pocket during Tchaikovsky’s Fifth: BT’s Beattie MAUREEN LIPMAN gives a ringing defence of the home phone as it faces extinction

I hate with a passion the drug that I am addicted to. It is oblong and sits in a leatherette cover in my pocket, at my bedside and in my handbag, and is as rapacious for my attention as a chihuahua on heat.

It is the enemy of my peace of mind and the management of my day. I loathe the way it is the first thing I reach for in the morning or halfway through a troubled night.

I hate the way it takes the attention of my children when they visit.

In contrast to the mobile phone, the landline is my friend.

It is infinitely less demanding, and only family and like-minded friends ring me on it. It doesn’t get hacked or stolen, and when I am out it stays home and waits for me with the flash of a message.

It has a sensible ring and doesn’t vibrate in my trousers in the concert hall in the middle of Tchaikovsky’s Fifth. It doesn’t have to transmogrify into another shape every year or demand updating. It has no cute otters or overly loving donkeys to suck up my time.

However, I have read that old-fashioned phones are being phased out, like liberty bodices and Vim. 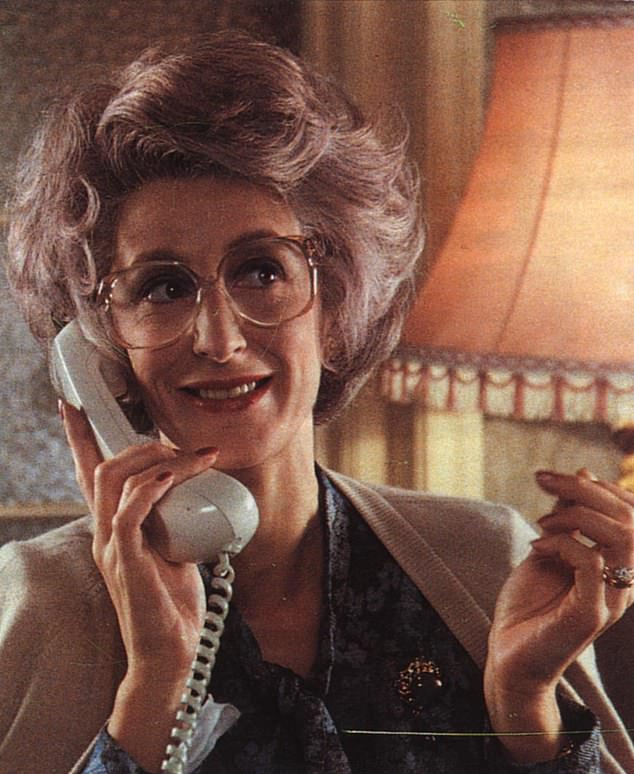 END OF THE LINE: Maureen Lipman as Beattie in a BT advert from the 1980s

My children don’t bother with them. Why should they when the world is in their back pocket? When every friend is to hand and you don’t have to race out of the lavatory, mid-stream, to grab a receiver just as it goes on to answerphone.

Who hasn’t fumbled with keys dropped into snow at the front door while the landline rings relentlessly indoors with the call that would have taken you to Hollywood?

Who hasn’t wedged a sandal into the living room door with their neck craned to catch a favourite TV show at its funniest while lunging for the phone on the hall desk?

Now BT is even changing its company brand name to EE. Like I care? Do they think that sounding like the squeak of a mouse is going to make people love the multi- billion-pound company more?

Not that, in its way, the landline wasn’t equally addictive in its time.

My late mother began the day by phoning everyone she knew. She had the same conversation with each one in turn.

We have accepted the end of the coin phone on a draughty landing and the demise of the red phone box with hardly a murmur of dissent, moving seamlessly into remote handsets we lose in every corner of the flat. So why should we regret the end of the landline?

Goodbye quarterly bills and waiting in line to report faults, listening to variations of Vivaldi and his Four ubiquitous Seasons.

But I am not ready. It has taken me 15 years to get to an 0207 prefix in London. Do the powers at BT/EE really think I have moved around North London addresses with the 0208 prefix only to give up my 07 status as soon as I arrived in a W2 postcode? No way.

In Hull, where I grew up, the city had its own private phone company. Phone boxes were – and are – cream, not red, and most of us had a party line. You picked up the phone and, if someone else was speaking, you rang off. Next time, if the other person was still on the line, you sighed and replaced the receiver. After that, it was a curt click until you got the line back.

In those days, not everyone had a phone and it was quite usual for neighbours to knock on your door and request a ‘lend of your phone for an emergency’. Happy days.

BT is not being phased out, its bosses claim, insisting it will ‘retain an important but more focused role for consumers on standalone broadband and online services’. Words such as ‘flagship’ and ‘enterprise’ abound. My heart sinks.

BT Tower in Central London will retain its name. But I would like to hang on… to my trusty landline.

I may be a dinosaur but I know my response to EE is ‘Ee bah Glum’.