Melbourne's population swelled beyond 5 million before the coronavirus pandemic as thousands of migrants flocked to the inner city and the outer suburbs, but its claim as the nation's fastest-growing capital is set to end.

Population Minister Alan Tudge on Friday cautioned growth was likely to be lower for longer with the government now set to focus on attracting "job-making migrants" to help rebuild the economy. 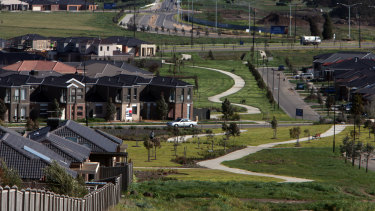 Strong growth in outer suburbs such as Craigieburn took Melbourne’s population beyond 5 million before the advent of the coronavirus pandemic.Credit:Erin Jonasson

The Australian Bureau of Statistics, in its annual regional population report, said the population of Greater Melbourne had reached 5,078,193 by June 30 last year, an increase of almost 115,000, or 2.3 per cent, over the previous 12 months. Sydney remained the most populous city, growing by 81,833, or 1.6 per cent, to more than 5.3 million.

Continuing its pre-coronavirus trend, Melbourne would reclaim its title as the nation's most populous capital in 2025 or 2026. Central Melbourne's population went through 50,000 through the year, adding 2800 residents, while the rest of the inner city also grew strongly in areas such as Southbank and North Melbourne.

But the biggest growth was in the city's outer suburbs. In Wollert, in the north-east, the population grew by more than 17 per cent in the year to 16,073. The population of Wyndham grew by 15,127, hitting almost 276,000 on the back of large gains in areas such as Truganina and Tarneit.

Much of the population growth has been driven by new migrants while Melbourne also continues to draw residents from other parts of the state. Melbourne's median age is now 35.6 years compared to 42.3 for the rest of the state.

Outside Melbourne, the rest of Victoria added more than 20,000 people, taking the state's overall population to 6.6 million.

Geelong now has more than 206,000 residents while across the Surf Coast and Bellarine Peninsula the population grew by 4.6 per cent to 83,300. Some areas suffered a drop in numbers, with most around the Wimmera and towards the Murray River. 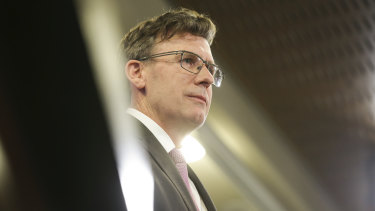 Population Minister Alan Tudge says attracting “job-making immigrants” will be vital in the post-pandemic rebuild of the Australian economy.Credit:Alex Ellinghausen

The figures pre-date the coronavirus pandemic, which the federal government is expecting to result in a near collapse in the number of migrants, particularly to Sydney and Melbourne. Every other capital relies far less heavily on migration for population growth.

Inner-city Melbourne has suffered a sharp rise in rental vacancies, due to both an absence of international students and tourists taking advantage of short-term property tenancies.

It was now "effectively down to zero" and Mr Tudge said it would take some time to get back towards normal.

Once migration processing services got back to normal, the government would focus on those people who could make a substantial economic boost.

"It's going to take some time before we're anywhere near back to where the [net overseas migration] figures were," he said.

"When that happens, we're going to want to prioritise those people who will be job-making migrants who will come here to help create jobs for further Australians."

Get our Coronavirus Update newsletter for the day’s crucial developments at a glance, the numbers you need to know and what our readers are saying. Sign up to The Sydney Morning Herald’s newsletter here and The Age’s here.