Melbourne Theatre Company has cancelled the rest of its 2020 season, meaning 11 of its 12 productions planned for the year either closed early or never took to the stage.

With the pandemic lockdown still at its height, and social gathering restrictions likely to continue for months, there was no longer any prospect that commercially viable, and safe, productions could be performed this year. 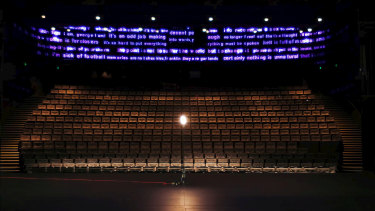 The ghost light at Sumner Theatre at Southbank,Credit:MTC

Artistic director and chief executive Brett Sheehy called it a "dreaded conclusion to an incomprehensible year", and executive director and co-CEO Virginia Lovett said it was a "seismic crisis" for the company, which has lost the vast majority of its budgeted income for the year.

The final two shows in the season, Girls & Boys and Sunshine Super Girl were due to open in October and November, and the company was to rehearse and live-stream SLAP. BANG. KISS. in September for schools. All have been cancelled.

Sheehy said it was a "crushing" blow for staff and artists as well as audiences and supporters, though "perhaps not a surprising outcome given the severity of the situation in Melbourne".

Lovett said the cancellations and closures equated to the loss of 345 jobs for actors, production crew and theatre staff.

The company usually derives 78 per cent of its income from ticket sales, events, venue rental and food and beverage sales. It is looking at a $12.5 million loss at the box office.

"This year has been a seismic crisis for the company [which is] currently operating on skeleton staff," Lovett said. "The impact of this crisis will be felt for many years to come as we move from survival to recovery."

Both Sheehy and Lovett thanked the MTC team and wider community for their resilience and support – and pledged the company would "play an integral part in Melbourne's economic revival".

Malthouse Theatre has not yet given up on the prospect of putting live theatre on stage before the end of the year, though a spokeswoman said options were still being “worked through”.