Midnight Mass is the latest television masterpiece from Mike Flanagan. The 7-episode series is a tour de force that explores faith, fanaticism, forgiveness, and hope. The final episode of Midnight Mass begins in the midst of chaos as the vampire parishioners destroyed Crockett Island. Erin, Sarah, Sheriff Hassan, Warren, and Leeza come together to try and protect the rest of the world by keeping Crockett Island’s vampires from leaving. In the end, Erin is attacked by the Angel and dies as the sun comes up.

As Erin is dying, she gives a beautiful monologue in her mind and reveals to Riley what she thinks happens after death. Kate Siegel opened up to HollywoodLife about that unforgettable speech, filming that final scene with the Angel, and Riley’s death in episode 5. 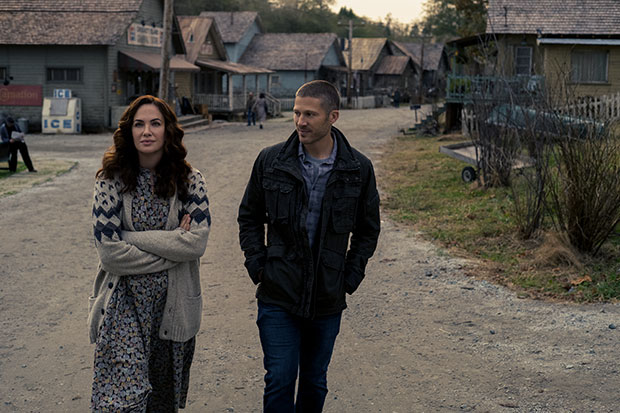 “It’s a truly intimate moment, and I’m glad it resonated with people. I was raised Jewish, and the phrase ‘I am that I am’ is a big freaking deal,” Kate told HollywoodLife. “That’s a phrase. Judaism deals a lot with questions and the power of words and the power of questioning. When I received the script, I’m reading this going, ‘Oh my, God, this is incredible. Oh my, God, this is incredible.’ I get to that line, and I just felt deep terror because I was like, ‘How will I say that? How will I get myself to a place where it feels authentic and not egotistical to say that?’ Because I wanted to do the speech service. And like most things with Erin, it was a question of stripping away and stripping away my preconceived notions, stripping away my overly flourishing acting choices, stripping away any desire to pretend to be something. And I had an incredible gift in Zach Gilford that day because he was present. That face and that level of talent, that calm, honest talent. He doesn’t suffer, I think, from the storm of insecurity that I carry around with me. Much like Erin, when I was lost, I would just look at Zach and he was there listening and being present and being trustworthy. I tried to dive further into that and get as much out of my way as I could.”

One of the most haunting but empowering scenes is when Erin is attacked by the Angel. As he drinks her blood and sucks the life from her, Erin takes a knife and cuts his wings, preventing him from flying off Crockett Island. Kate explained how that scene was filmed and opened up about Erin taking her trauma and turning “it into steel.”

“That scene was shot in two sections. There was the attack that was shot on location in Langley, and then there were the wings and the monologue, which were shot on stages,” Kate revealed. “They do that huge crane move, and you can’t do a huge crane move unless you can control the weather and the wind around you. I had all these plans for what would happen when that when Quinton [Boisclair] would jump on me — Quinton plays the Angel — and attack me. I had a whole thing set up and physical motions that I wanted to do. And then when it happened, all I could see I saw red. I went into deep panic, a deep animal panic of, oh my, God. Get this man off of me. This huge man is grabbing me, and I’m held down on the ground. I was not expecting that at all. I guess you can call it trauma-lite because I was in a safe environment. He wasn’t hurting me. Everyone there was protecting me, and there was nothing assault in the whiff of it, but it brought something up in me. So when I was preparing to do the second half of that scene, I thought about all the women I know who have been through something like that and how they are the strongest, most capable people I meet. They are the ones that are able to turn their trauma into truth. They’re able to turn their trauma into strength. When he was on top of me for the second section, when I’m cutting his wings, I was thinking about that and thinking about the life Erin led and when she had to clip the wings of those doves. Erin is a great example of someone who took trauma and turned it into steel. I wanted to be there for Erin in that moment, and I wanted to take my traumas that — I haven’t been through what Aaron’s been through — but take the trauma and let everybody know that it’s okay to accept your trauma and turn it to steel.”

Every episode of Midnight Mass is exceptionally strong, but episode 5 is the one you won’t be able to forget. Riley sacrifices himself in front of Erin to make her understand what’s really happening on Crockett Island. Riley and Erin row out into the middle of the water, and Erin screams as she watches Riley burn when the sun rises. Erin’s blood-curdling scream continues as the credits roll. 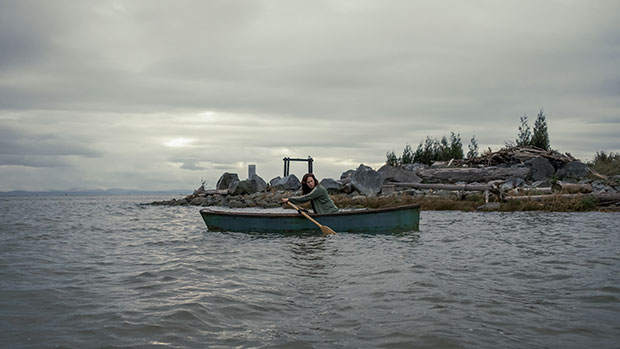 “That was such a challenge because, as you can imagine, there wasn’t anything in front of me,” Kate told HollywoodLife. “You can’t actually set Zach Gilford on fire in order to make a performance happen. So that’s one of those rare things where, as an actor, you find yourself doing the type of research that could get you arrested. Like, googling how long will it take to burn a human body? What does burning flesh smell like? [Looking up] cremation videos because I just wanted to know. I figured the emotion will be there. I wanted to know the facts so I could create a real sense of make-believe, and the thing that stuck with me and stuck with Mike Flanagan when we talked about it was how long that would take. So we the audience get to see the moment his skin catches on fire, but the amount of time that would take to turn a healthy human male into a pile of ash is an infinite, unbelievable amount of time. And on some level, Erin never leaves that boat because that’s one of those things that you see and you can never unsee. She spends at least the next episode completely in shock. It’s not until they’re handing out the cups in the church that you kind of see Erin wake up again. It’s like, “No, no, we can’t do this.” Because it’s just too much, and it needed that level of trauma. One of the ways that Mike is a genius is letting that scream extend over the credits of episode 5 gives you a sense of how long it would have taken.”

She added, “When you click play next and episode 6 starts with Erin and the boat and you see her again, you have a sense of what she’s gone through. It was just very hard on the day because there’s nothing to look at. So I did my research, and then at a certain point, you just let it rip. Again, it’s a leap of faith, right? I’m going to start pretending this is happening, and I guess we’ll see what happens. If this one isn’t good, we’ll do the next take.” Midnight Mass is currently streaming on Netflix.