Splendour in the Grass festivalgoers are calling for refunds after thousands of patrons were forced to sleep in their cars overnight and are still yet to get into the grounds at North Byron Parklands despite many now queueing for over 15 hours.

The delays came after recent heavy rainfall across the Northern Rivers, causing the festival grounds to be inundated with water. More rain is forecast in the coming days and is only expected to ease on Monday. 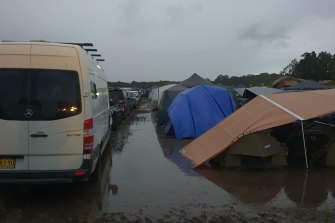 Festival goers say there has been a lack of communication from organisers.

Some festivalgoers have called for Splendour in the Grass to refund their tickets, while others have suggested the event should be cancelled.

Despite moving some patrons to nearby festival grounds, thousands were still allocated camping spaces within the Parklands, causing a major line of traffic into the festival entrance.

Jaide Fisher, 26, who travelled with her friend and partner from the Hawkesbury, was still lining up outside the festival at 8.30am on Friday, after arriving at 5.30pm on Thursday.

“We decided to finally sleep in the back of our ute at 2.30am this morning since we hadn’t moved in hours. We made up a very uncomfortable bed onto our Eskys in the tray of the ute,” she said.

Fisher said all she wants to do is “get the hell out of here” but said the trio have spent $1000 each on the festival and are concerned they won’t receive a refund.

“We don’t even want to go in any more, but we won’t leave if we’re going to waste all that money. After this experience I’ll likely never go again,” she said as her line-up time clicked over to 15 hours.

Artists due to be performing on Friday told The Age and the Herald they were concerned about how they were going to get into the site on Friday in time to perform.

“Ground staff have been doing their best, but there’s been a lack of communication and we’re unsure what’s going to happen,” one performer told The Age and The Herald.

One source working behind the scenes told this masthead that even backstage areas had been flooded, and they were concerned about how many of the stages and performing areas would handle the flooding.

“The water table is so high because of the recent rains, it just took a little bit more for everything to flood”.

It’s the festival’s first return since 2019, and organisers had upped the capacity from 40,000 to 50,000, adding additional pressure to campsites, walkways and performing areas.

In a statement posted to the festival’s Facebook page, organisers blamed the issues on staff shortages and weather.

“We are doing the best we can – the show will go on rain, hail or shine,” the statement said.

Chris Harrington drove up to the festival from Melbourne with his partner Emma, hoping to camp at their first Splendour.

On Thursday afternoon they joined the queue of cars trying to get into the campsite, spending eight hours in line before being forced to turn around.

“We only made it about 4kms in those eight hours. We didn’t move at all for the last two,” Harrington said.

After midnight, Harrington turned around and drove to the nearby town of Brunswick Heads to try to find accommodation.

“Everything’s booked out, but luckily we have a friend staying here and we might be able to camp in their backyard,” he said. Another attendee, Jacqui Withers, managed to get into the site and set up her tent but was forced to sleep in her car due to the rain flooding her tent.

“This is the grimmest night of my life,” she said. 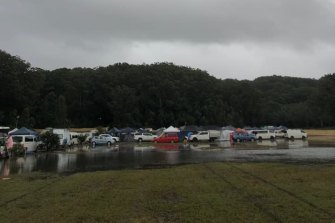 Organisers say the festival will go ahead regardless of the issues.

Freshwater resident Acacia Middlemist, 21, said she and her friends waited nine hours to get into the gates on Thursday.

“We had no access to food, water or toilets for about five of those hours,” she said.

Middlemist said the festival needed to be cancelled.

“It’s so unsafe to be camping here. There was only one SES worker directing people to different areas, all of the campgrounds we were supposed to be placed [at] were under water,” she said.

“It’s been an absolute shit show, coming from Sydney too we were in our cars for almost 18 hours yesterday, fuel was being lost. It was just horrific.”

Middlemist said stalls at the festival were now selling gumboots for $80.

Melbourne resident Aylin Ergin, 25, arrived at the grounds on Wednesday and said she has watched the chaos unfold.

Ergin said the traffic was backed up over 4km on Thursday, the main day people normally arrive at the event.

Ergin said the festival conditions didn’t get much better once inside the venue.

“It’s an absolute swamp, everything is coated in mud and some is ankle deep,” she said.