Skilled migrants will be allowed to return to Australia as a priority group but the federal government has not yet set a date for their return, triggering concern from businesses worried about skills shortages and eager for certainty.

While a national average vaccination rate of 80 per cent of over 16s will trigger a restart of international travel for Australians looking to go abroad, Canberra has not yet set a restart for skilled migrants to come here. 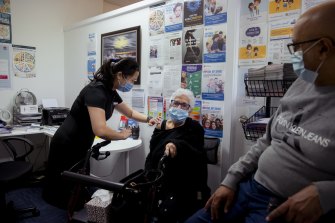 Pharmacists are one profession in short supply in Australia.Credit:Dominic Lorrimer

“The first cab off the rank is Australians,” Prime Minister Scott Morrison told breakfast TV on Tuesday. Once home quarantine is up and running for Australians, Mr Morrison said the next priority would be double vaccinated skilled migrants and international students.

Andrew McKellar, chief executive of the country’s largest business lobby group, the Australian Chamber of Commerce and Industry, said the Prime Minister’s announcement that international travel would be brought forward was helpful but left businesses without clear answers.

“Although small business owners had hoped that the announcement last Friday would bring an end to this uncertainty, employers still have very limited options to address crippling skills shortages,” Mr McKellar said.

Innes Willox, who represents about 60,000 businesses as chief executive of the Australian Industry Group, said skills shortages would quickly bite harder once states and territories come out of lockdown, necessitating a return to the country’s pre-pandemic levels of skilled migration.

“Our international borders need to reopen as quickly as possible,” Mr Willox said. “There is no time to waste.”

The opening of borders will require negotiations with state governments, which control caps on hotel quarantine.

A Coalition-dominated parliamentary committee on skilled migration said in August 500,000 migrants of all kinds had left Australia since the start of the pandemic, with another 77,000 net set to depart this financial year.

It concluded in August that Australia needed to swiftly overhaul its skilled migration system by creating more pathways to permanent residency, better lists of industries in need of staff, and options for high achieving international students to stay here to get more critical workers into the country in the wake of the pandemic.

“The lack of skilled migrants and near-record low unemployment has resulted in major skill shortages in the Australian economy impacting the viability of businesses,” the committee’s chair, Julian Leeser, wrote in his foreword.

Small businesses lobby boss Alexi Boyd said her members were reporting shortages of skilled bookkeepers, IT staff, hairdressers and chefs as well as issues in non-skilled professions. “It’s quite an urgent need to be addressed,” Ms Boyd said.

She did not criticise the government’s decision to prioritise letting Australians travel abroad before allowing skilled migrants in but said firm dates would let businesses plan their path out of lockdown. ”

Mr Richardson cautioned that some industries that had reported skill shortages for decades should instead raise their pay but in other cases said there was a genuine lack of people with the ability to do specialised jobs.

“There’s nothing wrong with putting the right person in the right place at the right time,” Mr Richardson said. “And if that means crossing a border, then sure.”