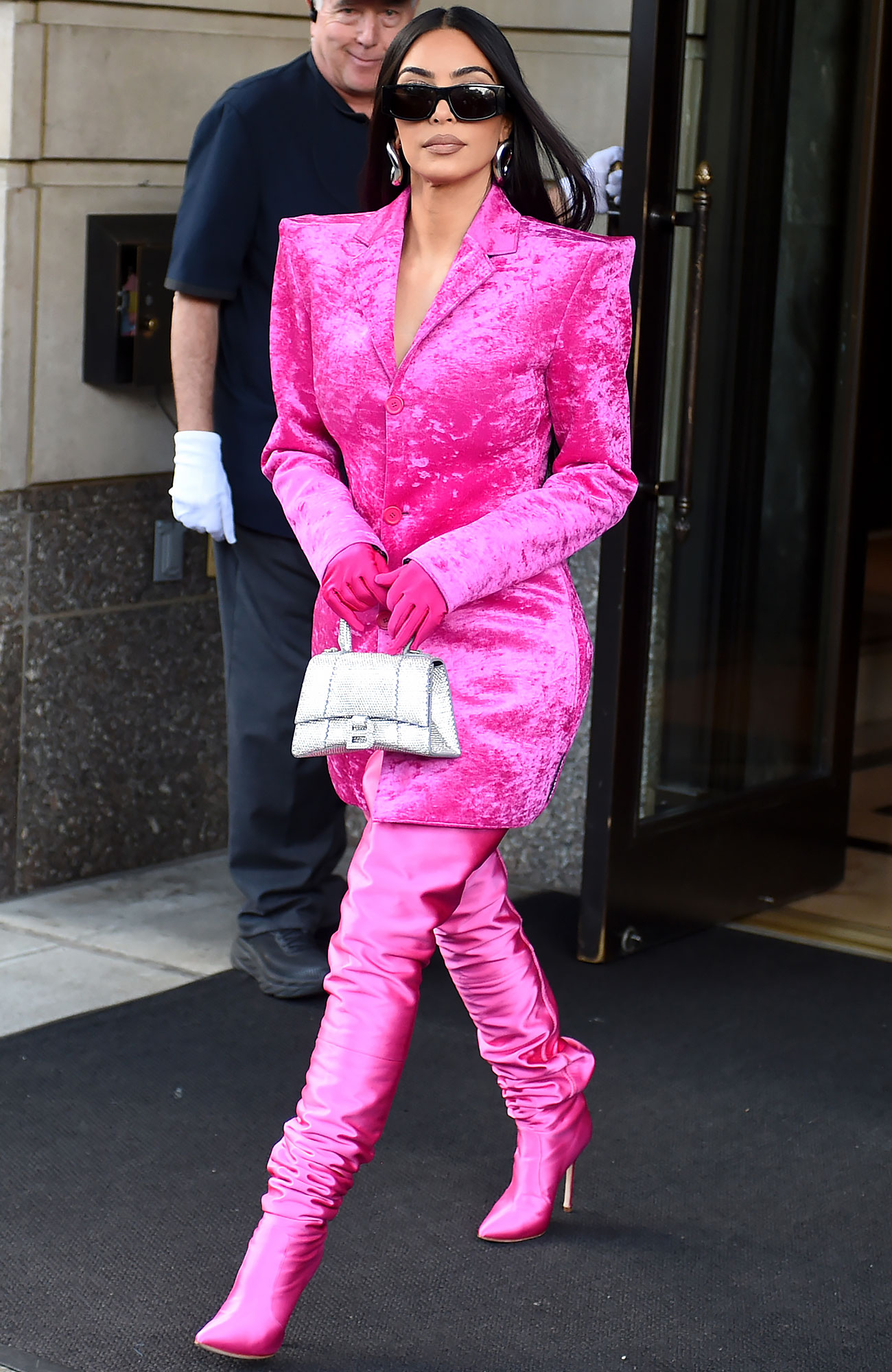 Pink is the new black! Kim Kardashian has been rocking all-black ensembles for weeks on end, but she just decided to switch up her style — big time.

The 40-year-old reality star, who is set to host Saturday Night Live, stepped out in New York City on Thursday, October 7, in a bubblegum-hued number that had Us stop in our tracks. With a velvet crush blazer and matching satin gloves and boots, the KKW Beauty founder looked like an IRL Barbie. She even had a glitzy Balenciaga bag in tow.

While color was once par for the course for the star, she’s been wearing exclusively black since September, when she came to New York City for the Met Gala.

Upon her arrival, she stepped out in a head-to-toe leather look — complete with a ski mask — by Balenciaga. On the day of the Met Gala, which she attended with Balenciaga’s creative director Demna Gvasalia, she wore a similar ensemble that basically broke the internet.

Because from her face covering, which is one of ex Kanye West’s favorite accessories, to the fact that she wore a plain, monochromatic ensemble to fashion’s biggest night of the year, there was certainly much to buzz about.

Many fans found themselves confused about the Skims founder’s fashion choice for the soirée, as it didn’t seem to play into the evening’s theme, “In America: A Lexicon of Fashion.” Most celebrities put on a spin on classic American fashion or showed up in era-inspired ensembles.

But after memes started to take hold of the internet, Kardashian decided to take to Instagram to provide an explanation for her interesting outfit choice. “What’s more American than a T-shirt head to toe?!” she jokingly captioned a few photos of her look.

The social media spiral stayed strong in the weeks that followed, as Kardashian kept up her black fashion choices. She wore a similar all-black outfit to a Met Gala afterparty and an off-the-shoulder top and jeans for her appearance on The Ellen DeGeneres show.

How Kanye West Influenced Kim Kardashian’s Style Through the Years

Fast forward to her return to New York City on Tuesday, October 5, and she stepped out in yet another monochromatic look. Later that evening though, while heading to an SNL party, she added a sparkly and shaggy Balenciaga coat to her outfit.

It’s unclear exactly what the lawyer-to-be has up her sleeve for her Saturday Night Live hosting gig, but it’s safe to say that Us Weekly’s Stylish will be keeping tabs!