In Monday’s episode of Coronation Street, cafe owner Roy Cropper asked handyman Seb Franklin, ‘May I be candid with you?’ and Seb responded: ‘Yeah, you can be whoever you like, as long as it’s not Piers Morgan because he does my nut in!’

Tonight, Seb died after having his nut done in for real, by a gang of thugs.

‘Karma is like a rubber band,’ actress Megan Fox once observed. ‘It can only stretch so far before it comes back and smacks you in the face.’

Being a football supporter is a tortuous ordeal, sprinkled with moments of ecstasy, but otherwise consumed by constant, simmering frustration and rage.

As Fever Pitch author Nick Hornby, a fellow Arsenal nutcase, put it: ‘The natural state of the football fan is bitter disappointment.’

Our club’s worst season in nearly three decades has worsened that state into blind fury – and, of course, attracted zero sympathy from gleeful rivals. 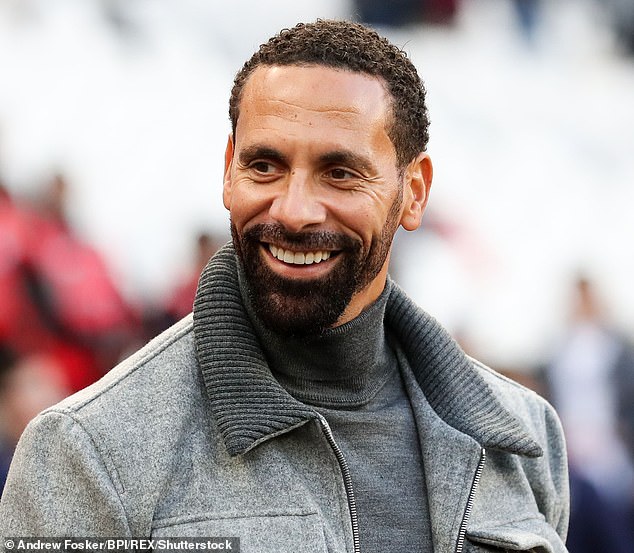 Manchester Utd legend Rio Ferdinand (above) sent me a kind voice message after I left Good Morning Britain, saying: ‘Oh no, man, my mornings won’t be the same FFS.’

Manchester Utd legend Rio Ferdinand sent me a kind voice message after I left Good Morning Britain, saying: ‘Oh no, man, my mornings won’t be the same FFS. You should be able to say you don’t agree with something, or don’t like it. You’ve done it with everyone, and I admire someone who does that. This cancel culture is a load of ********.’

But a more recent one was less charitable: ‘Just to clarify, I’ve put aside that you’re a f***ing Arsenal fan, just for this, but that’s all the positivity I’m going to give you – ever again. Good luck with your relegation battle.’

We haven’t been relegated in my lifetime and won’t be this year, despite the squad’s worst efforts. But for many other clubs, it’s that time of year when the spectre of going down looms like an executioner’s axe.

Today, Derby County, managed by Wayne Rooney, were fighting to avoid the drop from the Championship.

My WhatsApp exchange with their most famous devotee, One Direction star Niall Horan, as the drama unfurled perfectly epitomises what being a fan really means.

I contacted him at half-time, when Derby were losing 1-0 to Sheffield Wednesday.

‘How are the nerves, mate?’

‘Why do they do this to us?’ he raged. ‘Can’t believe what I’m watching – basic defending.’

At which point, Cardiff equalised in their game against Derby’s relegation rivals Rotherham, so Derby now only had to draw to stay up. ‘WOW!’ said Niall, firing off five smiling emojis.

Then Derby missed a sitter to seal safety.

‘Terrible!’ fumed Niall. ‘I sometimes think I should be a footballer when I see that.’

Eventually, the final whistle put him out of his misery. ‘Soooooo happy!’ he gushed ecstatically. And I was so happy for him.

He may be one of the world’s most successful singers, used to playing in the same stadiums as top footballers, but Niall’s afternoon of anguish, fury and ultimate jubilation – which he described as ‘the most intense 90 minutes of my life’ – is what being a real football fan’s all about.

As he tweeted Derby before the game: ‘I’ll always love you, even though you’ve broken my heart since the day I was born.’

Unlike Rio Ferdinand, comedian Jack Whitehall’s sole concern when I left GMB was about what it meant for him. ‘You better not go quietly into the night,’ he pleaded. ‘I need someone to make jokes about!’ (For the record, I wouldn’t go quietly into a Trappist retreat.)

Tonight, Whitehall hosted the Brit awards, and his opening line was: ‘It’s great to be back for the first live event in the O2 Arena! This venue has been emptier than Piers Morgan’s diary.’

I hate to kill a good joke, like Whitehall did many times during the show, but my diary’s never been busier. I’ve just replaced 4.45am alarm calls and long, hard mornings at the GMB coalface with lazy lie-ins and long relaxing meals involving pals such as Gary Lineker, Amanda Holden and Dame Joan Collins.

Much more of those Coogan-esque viewing figures, Jackie boy, and your own diary might suddenly look emptier than Little Mix’s craniums…

Mariella Frostrup has been the ‘thinking man’s crumpet’ since the days when you could call a woman that and she’d be thrilled rather than offended. So, I was obviously delighted when the glamorous Times Radio presenter went in for a hug when we dined tonight, until I remembered it’s still illegal to hug someone outside your household or bubble until May 17.

‘Sorry Mariella, you’ll have to wait until Monday, or I’ll have you arrested,’ I ordered, waving away her arms as they prepared to curl round me like a potentially lethal octopus.

I haven’t seen a face so crushed since this morning when Alastair Campbell sealed his brief GMB presenting stint with a grovelling apology for mistakenly telling viewers the Queen had died.

Ironically, this worst gaffe in breakfast show history may have killed off hapless Al’s scheming aspirations to be the new me. I’d give him a consoling hug, if it was allowed. 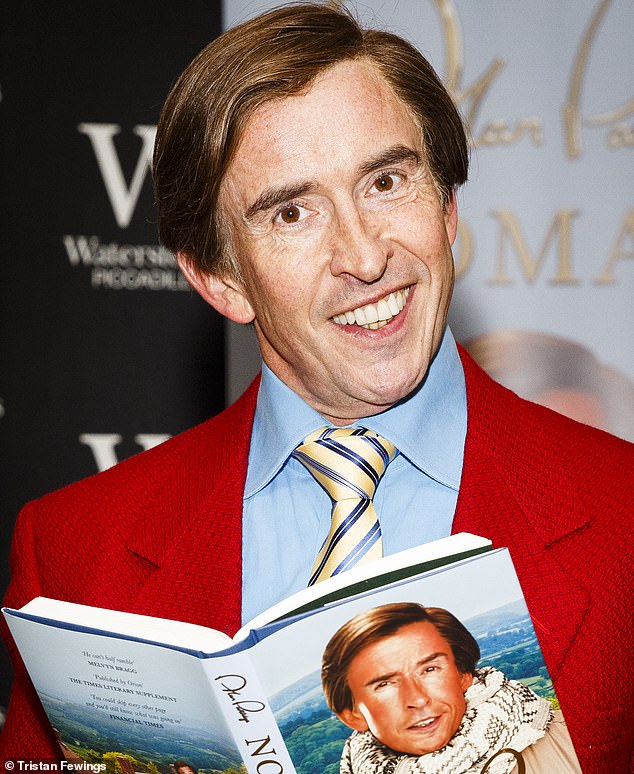 Talking of death, ratings for Steve Coogan’s (above) criminally unfunny This Time are collapsing faster than David Cameron’s reputation

Talking of death, ratings for Steve Coogan’s criminally unfunny This Time are collapsing faster than David Cameron’s reputation, and the pressure seems to be getting to him.

Press-loathing Coogan recently appeared on ITV’s Peston from a grim-looking motel room, from where he ranted and raved like a gibbering lunatic about journalists, including me, until he got shut off.

He’s become his own Alan Partridge character – a fading, deluded narcissist whose erratic behaviour is now increasingly ‘problematic’ and whose career has gone from ‘A-ha!’ To ‘Aaaaagggghhhh.’