On Saturday, May 4, you won’t have to travel to a galaxy far, far away to score some out-of-this-world savings. Whether you’re looking to feed your crew with a pepperoni pie spread or you want to satisfy some late-night munchies solo, Pizza Hut’s May 4 deal on pies means you can enjoy 35% off all menu-priced pizzas. Thank Yoda and call up your besties, because this calls for the ultimate weekend feast.

In a press release shared on Thursday, May 2, the nationwide pizza retailer revealed that it was bring savings to both fans and non-fans of Star Wars alike in honor of the franchise’s unofficial holiday: May 4, which is a play on words for Obi-Wan Kenobi’s signature phrase, "May the force be with you."

Once a year on Star Wars Day, you can go around saying "May the Fourth be with you" to people or use the pun in an Instagram caption, and no one will look at you twice. This year, you can plan to say that to your Pizza Hut deliveryman, and actually mean it, thanks to the pizza chain’s May 4 promo.

Here’s the deal. When hungry customers head to the Pizza Hut website or app to make an online order, they can enter in the promo code "ORIGAMIYODA" at checkout, and voila, they’ll walk away with 35% off all menu-priced pizzas in their shopping cart. Just keep in mind that the May 4 promo is only valid for online orders at participating locations, so I’d check that before making your order. In addition, you can only rake in those savings on one day only, so if you’re planning to spend your Sunday on your couch watching Netflix with a box of pepperoni by your side, I’d suggest ordering it in the night before so that you’re set the next day. 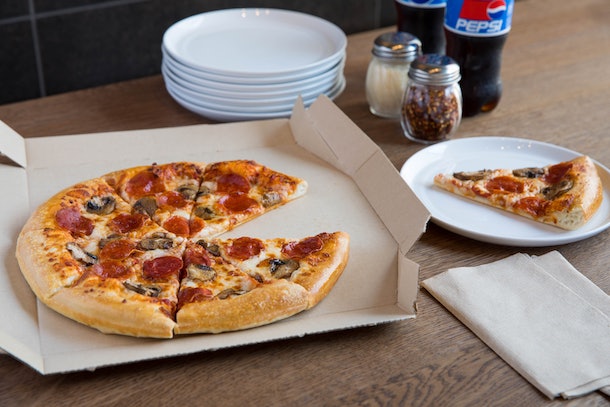 Unfortunately, it also sounds like the promo is only valid for full-price pizzas, so it’s likely that your breadsticks, P’Zones, stuffed garlic knots, Triple Chocolate Brownie won’t be part of the discount.

Still, that’s some serious savings on the ‘za of your choice (including my personal favorite, the Cheesy Crust Pizza), and there’s just one more reason to feel good about your pizza feast.

According to the press release, the May 4 deal also commemorates 35 years since the inception of Pizza Hut’s BOOK IT! program, which basically works to foster a love of reading in young kids.

This year, they’re pairing up with Tom Angleberger, who is the author of the New York Times bestselling Origami Yoda series (hence the promo code), and they’ll be donating 10,000 copies of his books to schools and teachers with a nonprofit that helps kids in need get access to books and other educational resources.

Natasha Collins, the manager of Pizza Hut BOOK IT! program, said in the press release:

It’s just one more reason to make some moves on a Pizza Hut feast come Saturday. May the Fourth (and all the pizza) be with you.