At least 15 people have been arrested while protesting the cutting down of Djab Wurrung trees from the site of a regional highway duplication in Western Victoria. Others have locked themselves to cars and barrels in a bid to prevent further removals.

Yesterday a yellow box tree widely referred to as the Djab Wurrung directions tree was cut down and removed from the contested site of the $157 million duplication. 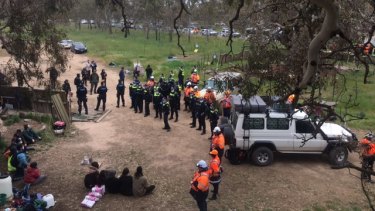 Police move into the protest camp at the Djab Wurrung tree site.

The Victorian government could face a legal challenge today, with Djab Wurrung legal advisor Michael Kennedy saying he would apply for protection for the trees in the Supreme Court on behalf of two clients.

"It should not have been desecrated the way that it was.”

On Tuesday morning police closed a section of the highway and removed everyone from the long-running protest camps except for around half a dozen people who were locked on to cars and barrels. 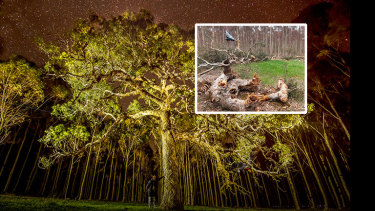 The yellow box tree, widely referred to as the directions tree, which was cut down. Credit:Justin McManus

The people in barrels were being cut out and removed at 11.15am on Tuesday. People were also issued with COVID-related fines and cars that were blocking entry to the site were towed.

Senator Lidia Thorpe, Victoria’s first Aboriginal senator, said she was heartbroken and that her mother, Marjorie Thorpe, was seeking an emergency injunction in the Supreme Court to prevent further tree removals. 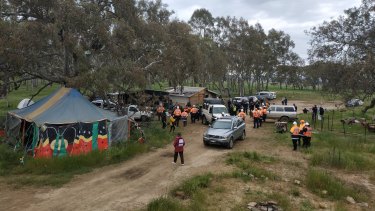 This morning police officers and roads workers moved into the Djab Wurrung site on the Western Highway.

"What timing – Dan Andrews gets everyone excited with his COVID updates and then they evict the land protectors of Djab Wurrung country, who have looked after this country for thousands of generations," she said.

"This is no different to the Juukan Gorge situation," Ms Thorpe said. "They’re destroying our cultural heritage, particularly that ancestor tree, and it should not have been desecrated the way that it was."

These trees have been the focus of hundreds of supporters at the Djab Wurrung Embassy since mid-2018. Police have tried to carry out eviction orders on several occasions.

Daniel Andrews told his daily press conference the government had "engaged deeply" with traditional owners and reached an agreement with 12 families who represented the area.

"This is a dangerous road. It needs to be built," he said. "We promised we would. We have been respectful. We've engaged. And we've been true to the spirit of the agreements that had been entered into."

"I know not everybody will be supportive of it … but at some point you've gotta try and come to an agreement," he said. "If we waited around for an absolute consensus, then that deadly stretch of road would go unimproved, and we would see more people dying on that road."

On Monday Djab Wurrung man Zellanach Djab Mara, who had been protesting the removal of culturally-significant trees for a number of years said he was devastated and shocked to watch the directions tree being cut down.

"It was a very spiritual tree, very moving and powerful," he said. The state government had no consent or jurisdiction to remove the tree, he said.

They also arrested a number of protestors for trespassing and issued them with COVID-related fines.

Major Roads Projects Victoria has been approached for comment.

The 12.5-kilometre highway diversion has also sparked a protracted legal fight. Earlier this month the Djab Wurrung filed proceedings against federal Environment Minister Sussan Ley for a third time, and called for work to be halted until the matter was resolved.

Last year the Andrews government agreed to change the road's design to spare 16 of the 22 trees identified as culturally significant by the Eastern Maar Aboriginal Corporation, including two "birthing trees".

The most important news, analysis and insights delivered to your inbox at the start and end of each day. Sign up here.