Nearly 90 firearms, including an AK-47, high-powered handguns and rapid-fire shotguns, have been seized from hardcore criminals under an invasive anti-gun violence program that allows police to search organised crime figures and their associates at any time, in any place without a warrant.

Victoria Police, which has issued more than 750 Firearm Prohibition Orders against violent or high-risk targets since May 2018, believes the system is now so feared by criminals that it is disrupting the ability of dangerous offenders to readily access firearms. 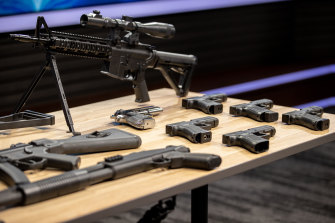 The orders are primarily targeted at veteran criminals with histories of violence and known members or associates of organised crime groups, such as outlaw motorcycle gangs and drug-trafficking syndicates. Orders are also being used to keep firearms out of the hands of extremists and terrorists.

The execution of at least one order was critical to solving a 2019 underworld shooting, with a “surprise” search of a suspect uncovering a handgun that has become a key piece of evidence in an attempted murder prosecution. The details of the case cannot be discussed because the matter is before the court.

Under the law, police can search the subject of an order without needing a warrant or “reasonable suspicion”. The order also allows searches of any vehicle or building the target is inside at the time, as well as any person in their immediate vicinity. The order lasts for 10 years and a search can be executed at any time by any sworn police officer.

Victoria Police has refused to confirm the identities of order targets or comment on specific searches for legal and operational reasons. 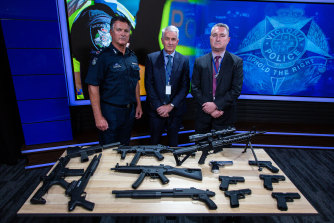 “We’re targeting people who have a history of flaunting the law in relation to firearms offences. They know the power that’s associated with them and the impact that could have long-term on their criminal offending,” said Superintendent Peter Brigham, from the State Anti-Gangs Division.

“We want to increase the chance that they are going to get caught and reduce the supply of firearms out there in order to ultimately reduce shootings.”

Members of the Mongols and Rebels outlaw motorcycle gangs, standover men, armed robbers and drug traffickers are among those known to have been served with orders.

Victoria Police has been accelerating the reach of the FPO program by issuing about 30 new orders a month, targeting gun crime and drug-trafficking “red zones” in the city’s northern and western suburbs and regional centres. Senior police have previously indicated they had a list of more than 2000 targets who could ultimately be served with the orders.

Mr Brigham said the fact that a search could come at any time and include people in the vicinity of someone under a Firearm Prohibition Order was disrupting the ability of violent offenders to carry, transport and use firearms.

“Crooks adapt to the FPO by not carrying it [the firearm] themselves, so our ability to search other people takes it a step further away to blocking their ready access to firearms,” he said.

Subjects of the orders caught with other contraband – drugs or stolen goods – during a search are also charged over that offending.

The Andrews government granted the extraordinary powers to police in May 2018 in response to a wave of gun-related crime, drive-by shootings and illegal firearms trafficking that had been plaguing Melbourne since 2013.

As the FPO program has been operating for less than three years, Victoria Police said it was still too soon to conclusively say if the orders had directly affected the number of shooting incidents or individual reoffending rates. Other initiatives, including the formation of a specialist illicit firearms unit, could also be contributing to a plateau in the number of gun-related crimes.

While controversial with civil rights advocates and gun owners’ groups, the legislation has successfully weathered a major legal challenge and a 2019 review by a parliamentary inquiry.

The greatest threat to the viability of the system came in May 2019 when the Victorian Civil and Administrative Tribunal overturned the very first order on the grounds it failed a “public interest test”, accompanying the decision with a stinging condemnation of the law’s restrictions on freedom of movement and association and its search-without-a-warrant provisions.

In the Court of Appeal, the order was reinstated and Victoria Police’s interpretation and application of the law was upheld, a finding that has not yet been tested again.

Apart from the signal sent by that win, Mr Brigham said he believed most FPO subjects eventually dropped attempts to challenge the orders once they saw the records police held about their history, associations and activities.

“They start to read the story about themselves and that can be fairly confronting for people,” he said. “It’s very public once it goes to VCAT and some of them don’t like the publicity.”

The legislation also remains deeply controversial with civil rights activists and some in the legal fraternity.

“Liberty Victoria is aware that members of the legal profession have serious concerns about the impact of the FPO regime on the rights of suspects, accused persons and those within the vicinity of someone who is the subject of an FPO,” the rights group said.

”Even though under the Victorian FPO regime, associates may only be searched if it is reasonably suspected that the person is committing an offence against the act or is in possession of a firearm or firearm related item … it would not be surprising that some Victorian police officers may be exceeding their powers in relation to searches, including of associates.“

Victoria Police reports that no complaint has ever been received about the use of the search powers.

The Independent Broad-based Anti-Corruption Commission, which oversees the operation of the FPO system, declined to comment for legal and operational reasons.