Prime Minister Anthony Albanese has confirmed a review of the lease of the Port of Darwin will be undertaken, raising fresh questions over the future of the 99-year lease by Chinese-owned company Landbridge.

During the election campaign, Albanese blasted the 2015 decision to lease the port for 99 years to Landbridge for $506 million. 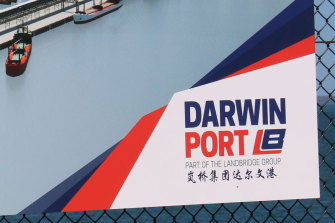 The Port of Darwin was leased to the Chinese-owned Landbridge Group in 2015.

A review of the lease by the Defence department ordered by the Morrison government reportedly found late last year that there were insufficient national security grounds to overturn the lease.

Any move to scrap the lease would likely further damage relations between Canberra and Beijing, which are already in a parlous state due, primarily, to China’s economic sanctions on Australian goods and the recent incident involving an Australian surveillance plane and Chinese fighter jet.

During a press conference alongside Northern Territory’s Labor Chief Minister Natasha Fyles, Albanese gave his most definitive statement yet when asked whether his government would look again at the controversial lease of the port.

“What I’ve said is what I said prior to the election – and I will do what I said I would do on this and every other issue – which is we’ll have a review of the circumstances of the Port,” he said. 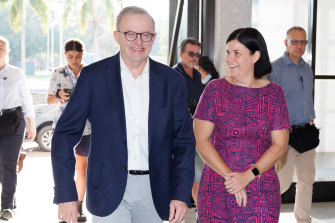 “The chief minister is conscious of the fact that we will do that, and we’ll do that in an orderly way.”

NT Labor used the lease to campaign against the Country Liberal Party during the federal election and successfully retained both lower house seats in a tight result.

Albanese also said he was prepared to use the federal government’s foreign veto laws to cancel contracts between Australian entities and Chinese state-owned companies.

“We supported the change in the Foreign Relations Bill. They went through [the parliament] with our support and hence, we believe that the federal government should be in charge of our foreign relations. That’s why we supported that legislation, we’ll always take the advice of DFAT on any issues which arise.”

Both major parties have committed to a $1.5 billion promise for new, separate port facilities in the Middle Arm precinct of the harbour and that development is being treated separately from the Landbridge-leased Port.

The seven-year-old lease became a flash point during the second debate of the recent federal election campaign, with Albanese criticising the former government for its handling of the matter.

“When I was a minister, we put US Marines into Darwin. When you have been a minister we have had the Port of Darwin sold to a company connected with the Chinese Communist Party,” he said at the time.

Scott Morrison denied the federal government could have played a role in stopping the lease. However, Defence or security agencies could have raised concerns about the lease at the time if they had any, but none were identified.

Former US President Barack Obama expressed concern about the lease at the time, while China hawks in the Defence establishment have also questioned the leasing of the Port undertaken by the former NT Liberal government.