Prince Charles and Camilla appeared in high spirits today as they kickstarted a  whirlwind one day trip to Northern Ireland.

The Prince of Wales, 71, and the Duchess of Cornwall, 73, arrived in the country this morning for a series of engagements in order to thank individuals who have gone the extra mile during the pandemic.

Prince Charles could be seen laughing and joking with staff at a food and grocery distribution centre in Newtownabbey, near Belfast, where he thanked them for their efforts during the health crisis and heard of the unprecedented demand they faced in recent months.

Meanwhile Camilla visited Belfast & Lisburn Women’s Aid, where she met with staff, supporters and service users to hear of the challenges they have faced in recent months.

In keeping with royal visits to Northern Ireland, details were not released in advance and the itinerary was not disclosed for security reasons. 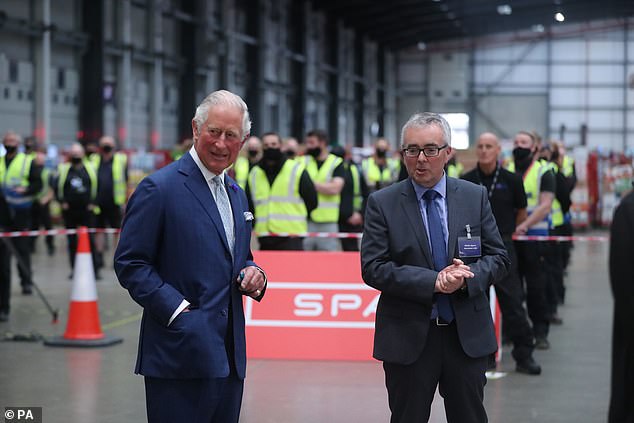 Prince Charles, 71, and Camilla, 73, appeared in high spirits today as they kickstarted a whirlwind one day trip to Northern Ireland 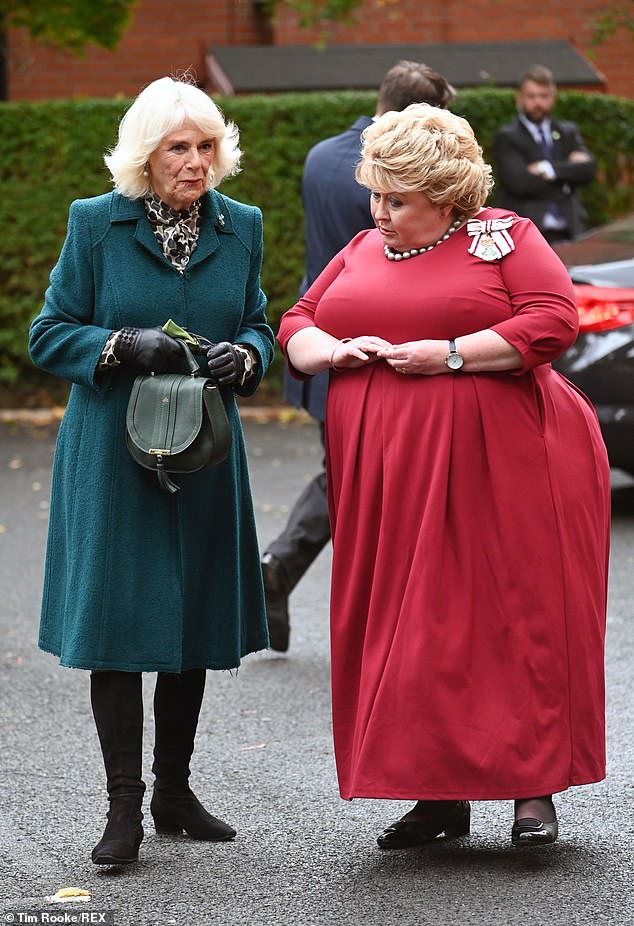 During the whirlwind engagements, the Duchess of Cornwall visited Belfast & Lisburn Women’s Aid, where she met with staff, supporters and service users to hear of the challenges they have faced in recent months 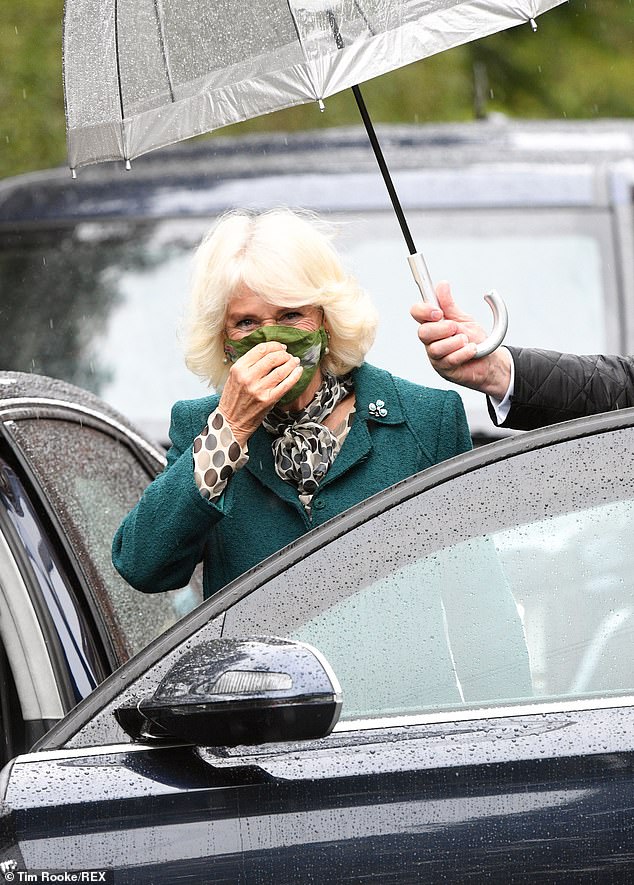 Prince Charles opted for a smart navy suit and white shirt for the visit, and added a pale blue tie.

Meanwhile Camilla wrapped up warm in a forest green coat and cosy scarf as she visited  Belfast & Lisburn Women’s Aid.

The royal could be seen removing a light green face covering as she arrived at the engagement.

The facemasks worn by she and Prince Charles during their visit were made by seamstresses who have been supported through the Turquoise Mountain Textiles programme. 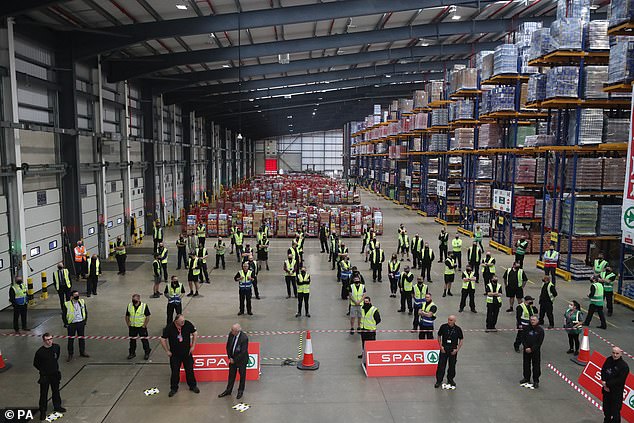 Staff at Henderson Group’s food and grocery distribution centre in Newtownabbey, near Belfast, carefully social distanced from one another as they awaited the arrival of the Prince of Wales 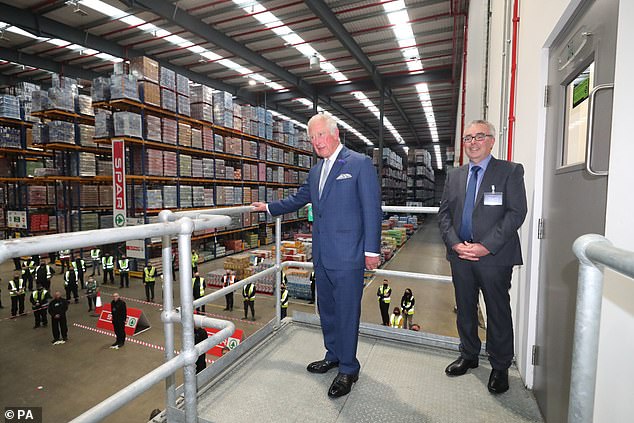 Prince Charles was given a tour of the centre before meeting with staff, whom he thanked for their efforts during the health crisis 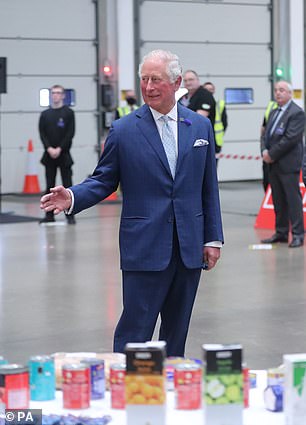 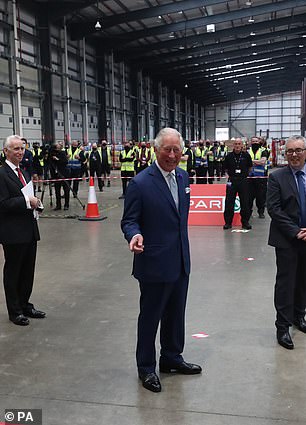 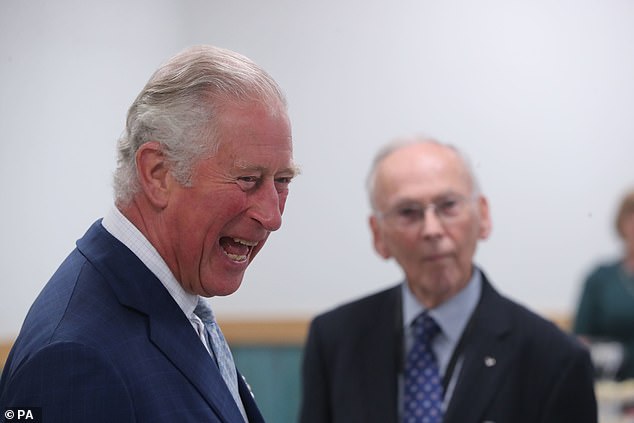 The royal appeared in high spirits during the visit, where he could be seen laughing and joking with staff 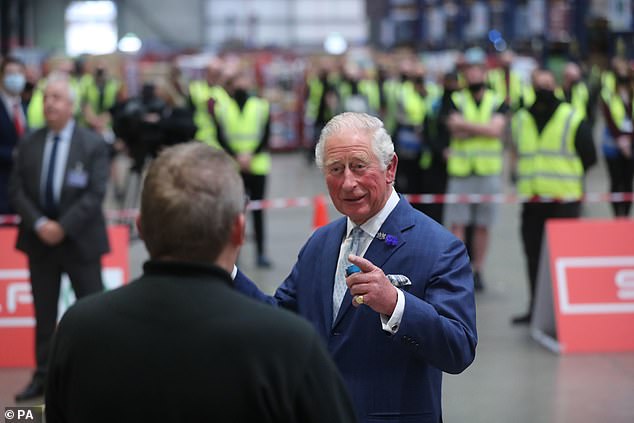 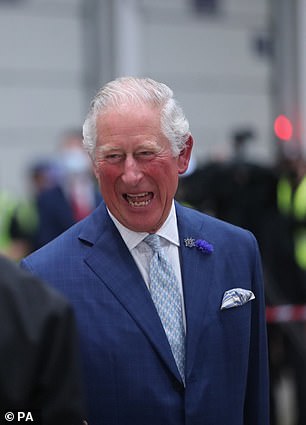 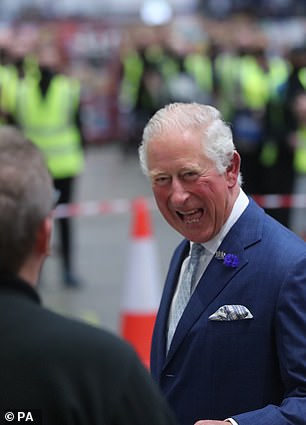 The royal appeared in high spirits during the visit, and could be seen beaming and laughing during his tour

Charity Turquoise Mountain was set up by The Prince of Wales in 2006 to protect heritage at risk and to provide training and jobs around the world.

Once inside and out of the rain, the Duchess met with staff, supporters and service users to hear of the challenges they have faced in recent months.

The Prince of Wales and Camilla also met a number of young nurses who recently completed their training early to help with the coronavirus pandemic during a visit to the Ulster Museum in Belfast.

Earlier, on the first engagement of the day, Charles took a tour of the south Belfast attraction and was shown one of the Rembrandt artworks which it recently received, as well as a tropical ravine in the neighbouring Botanic Gardens. 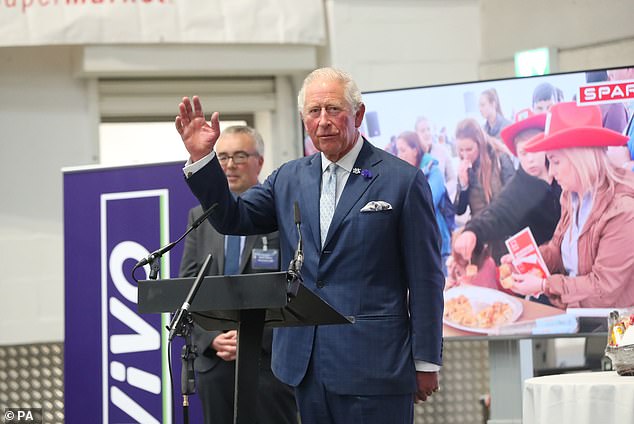 Later, the royal addressed staff at the factory to thank them for their efforts during the Covid-19 crisis 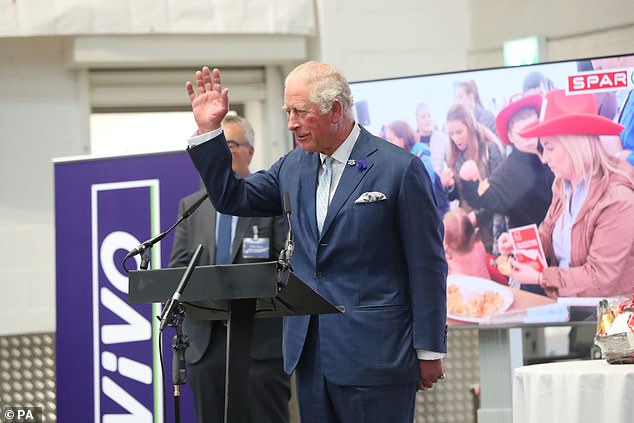 During his trip, the Duke of Cambridge, 38, spoke about how he struggled to talk about his emotions in a job that saw him encounter tragedy on a regular basis.

He opened up about his experiences flying with the air ambulance from 2014 to 2017 as he met serving blue light responders to discuss the importance of mental health support for those working in the emergency services.

William’s visit to Belfast had a particular focus on the mental health challenges many emergency services personnel face as a consequence of their stressful jobs. 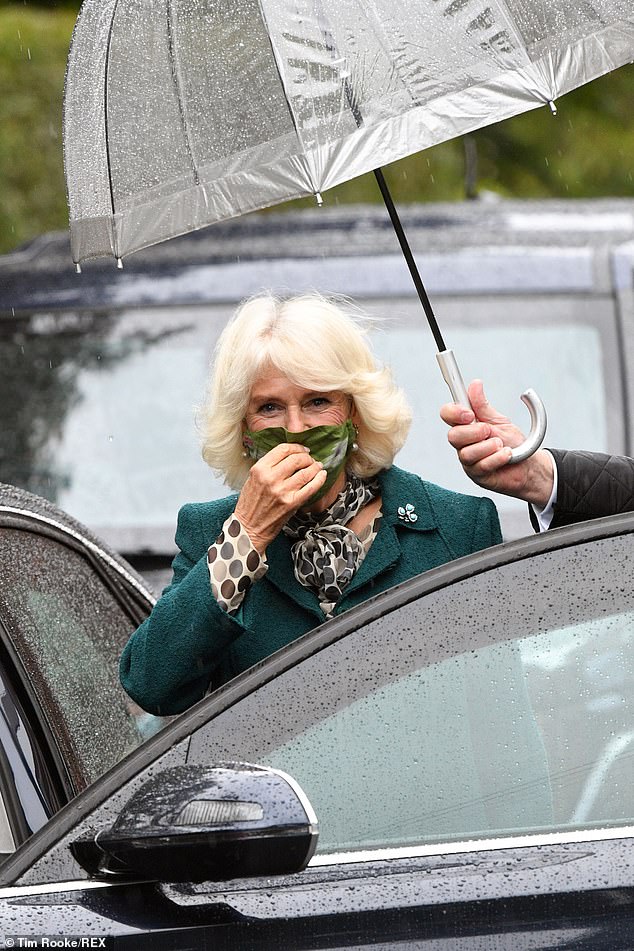 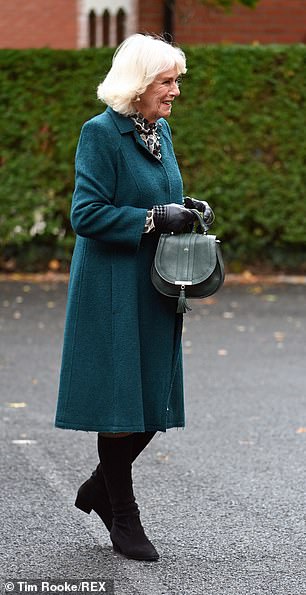 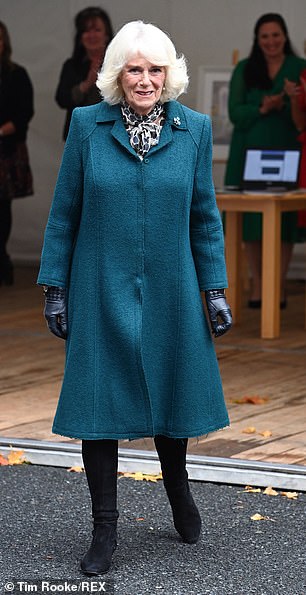 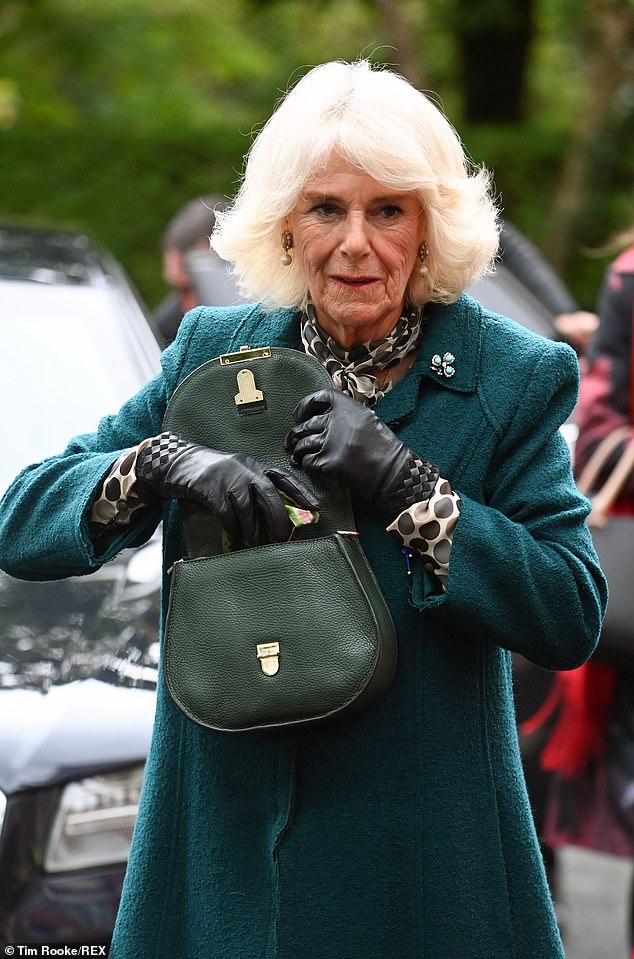 Prince Charles’ visit to Northern Ireland comes days after he warned that as many as one million young people could  need ‘urgent help’ due to coronavirus.

He said our youth was confronting a ‘uniquely challenging’ time amid the uncertainty of the Covid-19 pandemic.

In a rare intervention, Charles said the ‘destructive hopelessness’ of unemployment is facing Britain’s youngsters once again.

Writing in The Sunday Telegraph, he said the young are in particular need of measures to protect them from the worst effects of the crisis, adding that the country must not let optimism ‘drown beneath a deluge’ of economic predictions. 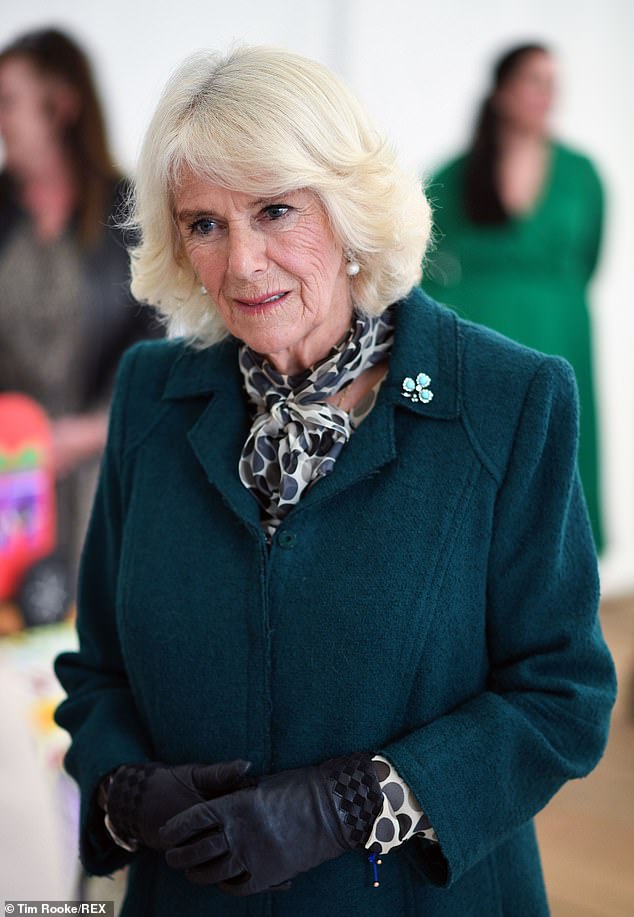 The royal, who is a long-standing supporter of domestic abuse charities in the UK and overseas, visited a not-for-profit organisation that supports those affected by domestic violence across Belfast and Lisburn

He added that while it is ‘all too easy to assume that nothing can be done… the task ahead is unquestionably vast, but it is not insurmountable.

‘There has never been a time as uniquely challenging as the present, when the pandemic has left perhaps another million young people needing urgent help.’

Reflecting on how he founded the Prince’s Trust charity in 1976, with the severance pay he got from the Royal Navy, Charles added: ‘I am old enough to remember other times when hope was scarce and pessimism seemed the only thing in abundant supply. 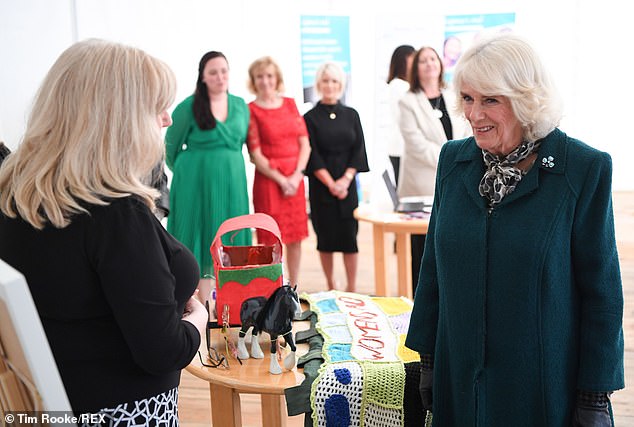 The Duchess smiled as she met with staff, supporters and service users of Women’s Aid in Belfast 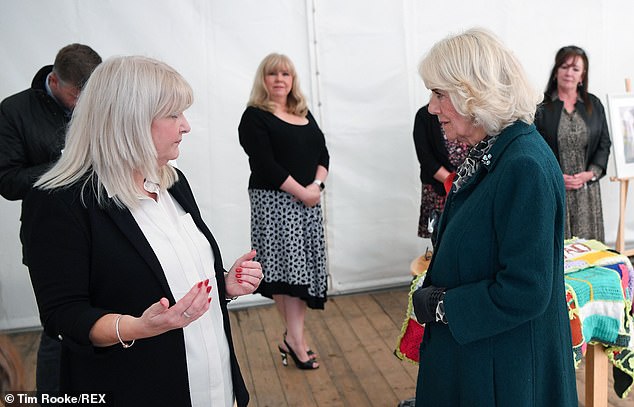 During the visit, Camilla heard about the challenges they faced by the those using the service in recent months 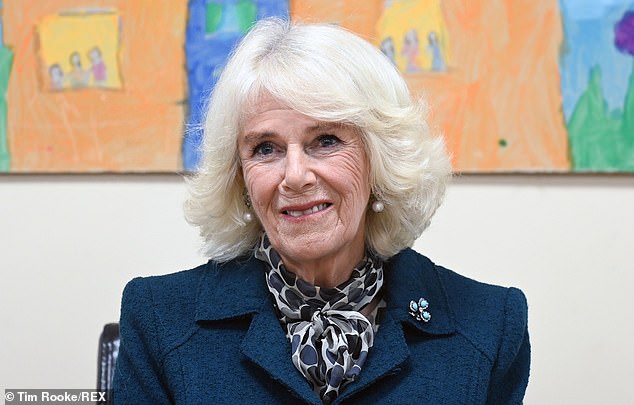 ‘In the mid-Seventies, when I left the Royal Navy, youth unemployment was one of the pressing issues of the time. It seemed to me that we should do something to try to make a difference, however small.’

The Prince’s Trust, has just helped its millionth young person, with research from the Trust showing that 55 per cent of 16 to 25-year-olds are more worried about being unemployed than they were a year ago.

The Prince’s Trust set up the Young People Relief Fund in the immediate aftermath of the pandemic to provide extra support to those hit by the economic fall-out.