The Duke of Edinburgh took advantage of a sunny morning today to get out at about for a carriage ride on the Sandringham Estate.

Prince Philip, 98, was accompanied with two female grooms on his carriage as he took a ride around the roads of  private estate.

The royal looked relaxed in a navy blue fleece and smart white shirt for his ride, wisely wearing a white bucket hat to shade his face from the morning sun.

The outing comes after the Queen and Prince Philip missed their new great- grandson Archie’s christening at the weekend, due to a diary clash. 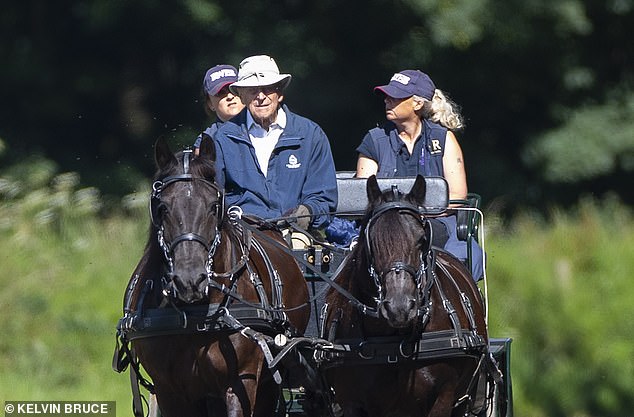 It is believed the Queen and Prince Philip were disappointed to miss the royal event, which happened at Windsor Castle on Saturday afternoon.

But it is understood that following a busy week of royal engagements in Scotland, the Queen flew straight to Norfolk to spend time with Prince Philip and visit the Royal Stud.

Following the relaxing weekend, The Queen is back to work this week as she carries out royal engagements in Cambridge.

And Prince Philip appeared to be enjoying the countryside of the estate as he took a ride today, smiling as he drove the carriage alongside luscious green fields. 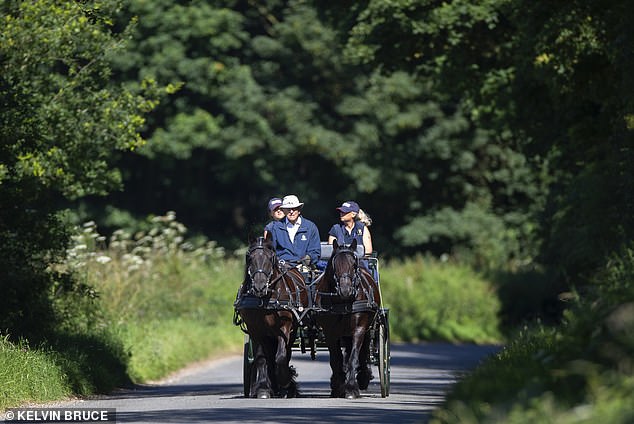 Accompanied by two female grooms, he took the reins and appeared to be wearing thick riding gloves for the drive.

The carriage was pulled by two Fell ponies, a favourite breed of the royals.

Since his retirement, Philip has had more time to enjoy carriage-driving, one of his favourite pastimes since the 1970s.

He raced carriages near Norfolk before going on to represent Britain at several world and European championships.

He has been also been seen multiple times taking the reins of a horse-drawn carriage around the Windsor estate. 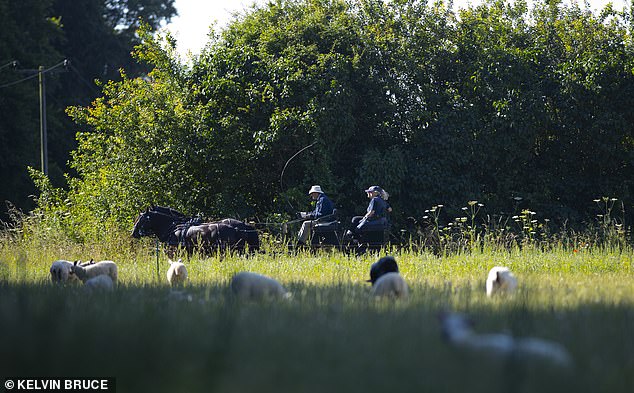 The nonagenarian conducted his final solo public engagement in August 2017, the last of some 22,219 he attended since the Queen ascended to the throne in 1952.

The duke admitted ahead of his 90th birthday in 2011 that he wanted ‘less responsibility, less rushing about’.

In a BBC interview, he said: ‘I reckon I’ve done my bit, I want to enjoy myself for a bit now.

‘With less responsibility, less rushing about, less preparation, less trying to think of something to say.

‘On top of that your memory’s going, I can’t remember names. Yes, I’m just sort of winding down.’