Forest areas the Andrews government recently set aside to protect the endangered greater glider had been logged before they were gazetted, providing scant additional habitat for the rare possum.

In October, the state government set aside “special protection zones” in native forests across Gippsland and the Central Highlands of Victoria, a total of about 25,000 hectares, to protect the greater glider.

But community environment groups say they were shocked to discover a number of forest sites within the new protected zones had been logged within the past 24 months. According to the Victorian Forest Alliance, around 17 areas were logged.

The alliance’s spokesperson, Chris Schuringa, said that when she met with staff from the Department of Environment, Land, Water and Planning’s biodiversity team to ask why the department had protected recently harvested areas, they were unaware it had been logged.

“This avoidable oversight has devastating and irreversible consequences for the endangered greater glider, for forest ecosystems and for climate,” said Schuringa. “We need protection areas that actually protect intact native forests and genuine greater glider habitat.”

While parts of the newly protected zones do contain quality glider habitat, particularly around Bendoc forest in far-north-east Gippsland, others include recently clear-felled forests, she said.

“It’s very likely these animals will have perished from the direct impacts of logging operations, or following logging from lack of suitable habitat and food sources.”

Photographs and footage gathered by the alliance on the ground, plus recent satellite imagery, indicate protection areas in Swifts Creek, Nunniong and the Colquhoun forest in East Gippsland, as well as areas in Mansfield and Baw Baw in the Central Highlands, have been logged – some as recently as six months ago.

Once a common species, the glider was first listed as vulnerable in 2016. Less than six years later, it is now listed as endangered. They rely on the hollows of older trees for nesting and shelter.

Logging in Victoria is governed by Regional Forest Agreements, a legal pact with the federal government that exempts state logging corporations from federal environment law, the Environment Protection and Biodiversity Conservation Act. 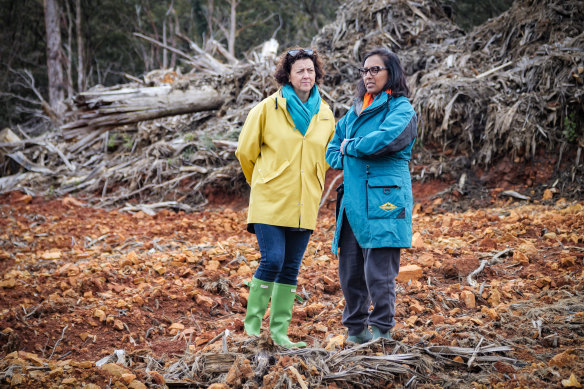 Independent MP Monique Ryan and Labor MP Michelle Ananda-Rajah during a tour of a logging coupe at Toolangi, near Melbourne.Credit:Australian Conservation Foundation

There have also been media reports about the agency logging protected forests and the carbon emissions that logging produces in Victoria.

Friends of the Earth spokesman Cam Walker has encouraged the Victorian government to bring forward the closure date of native logging from 2030 to the end of 2023.

“There’s a real sentiment that the time for native forest logging is over, that’s obvious,” he said. “It comes unprompted from more and more people, and the court cases have really contributed.”

The state government was contacted for comment, but did not respond before the deadline.

A spokesperson for VicForests said it had implemented the interim protections announced by the government in April 2021 and the permanent protections from September 2022.

VicForests notifies the department of all coupes where logging is occurring; coupe maps and plans are published on the VicForests website; and timber release plans, which outline which areas will be logged, are provided to DELWP, the agency said.