Seventeen years ago – on March 18, 2003 – David Burgess and Will Saunders climbed the sails of the Sydney Opera House and painted in looming red letters the words NO WAR. The pair were sentenced to nine months’ weekend jail and divided the nation between those appalled at the iconoclasm and those who believed the message made the gesture worthy. 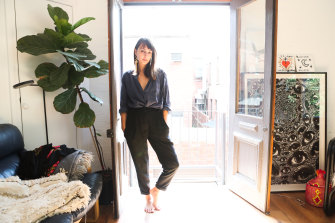 Ukraine-born Stanislava Pinchuk (aka Miso) at her Melbourne home.Credit:Jason South

A decade after Burgess and Saunders’ defiant act, on the other side of the world, pro-democracy protests began in Maidan Nezalezhnosti, or Independence Square, in the Ukrainian capital of Kiev. The collective weight of the protesters, accumulated over months, caused the Maidan’s granite slabs to crack. The protests turned tragically fatal and marked the beginning of the Ukrainian revolution and the ongoing civil war.

For Ukrainian-born, Melbourne artist Stanislava Pinchuk, 33, these two public spaces, arguably the hearts of their respective nations, span her two citizenships. Pinchuk has brought both sites together in a new photographic work The Red Carpet, which she will unveil in conjunction with a lecture titled The Thread of War at the All About Women festival at the Sydney Opera House on March 8.

Pinchuk’s works take as their starting point topographical data and the ways a landscape can contain the memory of a political event or conflict. The artist has mapped places including Chernobyl and the Calais Jungle refugee camp using techniques varying from the traditional, such as strings and height fields, to drone footage.

‘‘I kind of work like a surveyor,’’ she explains. ‘‘Every project has to be a bit different in the … way that you collect data, because you’re often under time pressures, security pressures … or left of field things that just come with the territory [when] working in difficult places.’’ 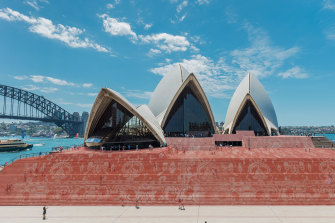 A mock-up of Stanislava Pinchuk’s The Red Carpet which features the Sydney Opera House steps draped in a Ukrainian Bessarabian rug.

The data she collects is then used to create a virtual three-dimensional model which is overlaid with a mesh ‘‘skin’’ that forms the basis of her works.

Pinchuk is best known for her pinhole drawings, in which these maps are painstakingly hammered into paper, conjuring an ethereal lace-like topography out of nothing. These works will soon form the basis of Pinchuk’s first museum survey exhibition opening at Melbourne’s Heide Museum of Modern Art in June.

The map takes another form in The Red Carpet, which is a photograph of a large Ukrainian Bessarabian rug draped across the steps of the Opera House.

Bessarabian rugs are symbolic of the region’s culture with designs revealing Kilim, Persian, Central Asian and French influences. The intricate patterning of Pinchuk’s red carpet also contains a data map of the topography of Kiev’s Maidan; the protest-induced cracks in the granite translated into lustrous folds and delicate details.

Due to complicated heritage and safety requirements, the installation of the rug occurred early in the morning a few weeks ago without members of the public present, but the photograph will be available to view in the entry lounge of the Opera House. 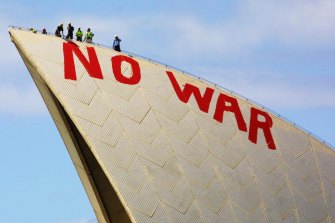 The No War slogan on the Sydney Opera House in 2003.Credit:AP

She describes The Red Carpet as “a love letter to decorative arts as [deserving] the same respect…as architecture,” the work imagining a grand public monument adorned with an item of interior domesticity. Pinchuk is interested in textiles as an radical space where women have historically had freedom to tell stories and create disruptive messages, whether through African wax prints and 'kangas', early 20th century propaganda kimonos, or Afghan rugs.

“[F]abric has such a tremendous capacity to hold memory: holding your perfume, or someone else’s smell on your body,” the artist says. “You go to a festival in brand new jeans and take them off [afterwards] and they’re moulded to your body. It has such a tremendous way of recording contour and memory, and such an absorption.”

Pinchuk, who moves home frequently in search of her next subject matter, sees carpet as a way to instantly delineate space.

“As soon as you put it down you’ve got a room,” she says.

The nomadic artist has spent the past year living in Sarajevo, where she is researching archival and living examples of central Bosnian Catholic women’s tattoos for an exhibition she is curating at the city's National Museum of Bosnia and Herzegovina. The research will also form part of a book Pinchuk is writing on tattooing and textiles for the Wellcome Museum in London. 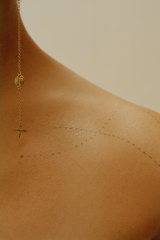 For Pinchuk, tattooing dovetails into her practice as it sits at the nexus of ritualised pain, decoration and needlework, and her interest isn’t purely academic. In parallel to her pinhole drawings, the artist creates hand-poked tattoos for friends, which themselves map journeys of the wearer. “My [pinhole drawing] practice is solitary and physically painful … So tattooing’s great because there’s all this adrenaline and messiness and joy and it’s permanent so quickly, whereas all my other [works] are so clean, so laboured.”

Not your standard side hustle, Pinchuk’s tattoos are made as part of an exchange economy, trading for everything from haircuts to artworks, including a drawing by musician Florence Welch (of Florence and The Machine) who sports an anchor inked by Pinchuk.

Contrasting these intimate encounters is her work for high-profile clients including Chanel, Tiffany & Co. and Qantas, and being acknowledged on Forbes’ 30 under 30 list in 2018. Quite a journey for the artist who arrived at the art world via punk music and graffiti, working under the name Miso.

“Growing up in Ukraine I didn’t know that being an artist was a job that you could really have in this day and age,” Pinchuk says. “We had a museum [but] I don’t think there was anything [in it] past the 19th century, so I didn’t really think contemporary art existed.”

After moving to Australia, Pinchuk began collaborating with friends to make work and put on shows but didn’t think of it as "art" until others labelled it as such. Studying philosophy rather than visual arts has meant she feels she’s “always playing catchup”, the deep research phases of Pinchuk’s projects betraying her intense thoughtfulness and curiosity.

“It’s nice when it’s instinctive and you just follow your feet, that’s the … thing about an art practice right? It’s like your best friend, it adapts with you.”

Following her feet has led Pinchuk into some unique situations, including living in Tokyo during the Fukushima nuclear disaster.

“[I]t was very interesting to me that when Fukushima happened, I was really prepared. I was surprised that a lot of people around me weren’t quite sure what it meant, or what to do. It made me think that when you grow up [in Ukraine] right after [the] Chernobyl [nuclear disaster] that it was…just a reality of life. I was so curious about how ingrained it was in me without realising.” Dwelling on the legacy of Chernobyl and the realities of Fukushima led to Pinchuk developing projects about both places, 30 and five years after the respective events. 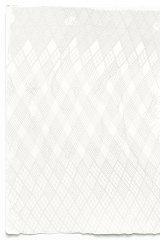 There is clearly an autobiographical element that ties Pinchuk to these conflict zones. While her curatorial project at Melbourne’s Immigration Museum Documenting the Body (until April 5) sees Pinchuk explore the physical encoding of identity and immigrant experience through tattoo, the artist has also investigated how immigration impacts the landscape outside the body. Working in France, Pinchuk spent six months mapping the Calais Jungle, a site where “there was no choice but for the ground to hold a huge testament… Because of the short notice forced evacuation, a lot of objects, buildings, tents, everything was trampled.”

Where Pinchuk had previously found herself translating invisible elements like post-nuclear air quality into pinhole drawings made from light and space, the chaos of Calais led to small terrazzo sculptures which at first glance appear like an inoffensive sample from an architect’s office before a closer look reveals pieces of sim cards and toothbrushes.

This material and conceptual double-bluff is central to Pinchuk’s work and has found a new platform in The Red Carpet. Producer Grace Partridge, curatorial director of the organisation Antidote who also contributes to the festival of the annual Sydney festival of the same name, has worked with Pinchuk over two years to bring The Red Carpet to the Opera House, and the photograph is part of a suite of works including screenprints, paintings and drawings, many of which will be included in the April-May exhibition Dancing with the Dead, an exhibition curated by Partridge at The Lock-up, Newcastle presenting the work of ten local and international artists exploring cultural, spiritual, physical and religious death and loss.

Partridge, who established Antidote in 2016, says Pinchuk’s work are visually exquisite yet also embody a sense of social justice.

“Stanislava is intuitive, thoughtful, tender but always strong in her resolve and dedication to turn trauma and destruction into something of great beauty… [She] is a force to be reckoned with and epitomizes the Gen Z, hustling, one-woman-team paragon," Patridge says.

In the past Pinchuk found motivation in the element of fear that came from making graffiti and learning to tattoo. Now it is ambitious projects like The Red Carpet and exploring the medium of filmmaking that are keeping her on her toes. “I think every five years you’ve got to get terrified, proper terrified. You’ve always got to, pull the rug out, you know.”

Stanislava Pinchuk will show and speak about her new work, The Red Carpet at the All About Women Festival at the Sydney Opera House on March 8. The Red Carpet work will be open to the public to view in the entry lounge.