Right from the start, filmmaker Bryan Fogel knew a crusading documentary about the murder of Saudi journalist Jamal Khashoggi wouldn’t be an easy sell.

He had critics on board: The Dissident, a forensic dissection of the Washington Post writer’s death that points the finger of blame directly at Saudi Arabia’s Crown Prince Mohammed bin Salman, was a huge hit when it first screened at the Sundance Film Festival in January last year. Audiences at Sundance also raved, sending the Rotten Tomatoes Tomatometer sky-high. 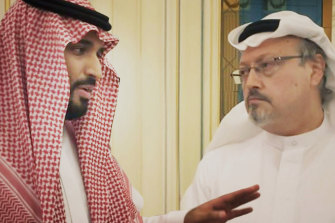 Saudi Crown Prince Mohammed bin Salman, left, and journalist Jamal Khashoggi in a scene from the documentary The Dissident.Credit:Briarcliff Entertainment

Fogel had already seen the signs, however, that major entertainment companies were not going to flock to him. Fogel had won Netflix’s first Oscar for best documentary with his previous film Icarus, about doping in Russian athletics. But Netflix hadn’t asked for a first look at The Dissident before it showed at Sundance and they weren’t queuing for it after the premiere, either – but then, nobody was.

Khashoggi had been a Saudi government insider, a journalist working within the boundaries of an absolute monarchy and the media face of the regime. The Crown Prince was the de facto ruler of the country under King Salman; Khashoggi supported his crackdown on corruption and Vision 2030 programme to modernise the country, including the much-touted reversal of the law that forbade women to drive.

As Mohammed bin Salman (known as MBS) increasingly became the sole driver of reform, however, he increasingly brooked no disagreement about anything. In 2017, seeing other progressives arrested, Khashoggi hurriedly left for the United States, leaving his family behind. He was soon branded a dissident; in the Saudi Twittersphere, he was “a traitor” whose “time would come”. His wife divorced him.

A little over a year later, CCTV cameras recorded him entering the Saudi consulate in Istanbul. He had arranged to pick up copies of his divorce papers in order to marry his fiancee Hatice Cengiz, a Turkish academic. She waited outside for him all day. According to recordings later released by Turkish investigators, Khashoggi was murdered by Saudi intelligence specialists who had been flown in on diplomatic flights for the job. His body was then dismembered. 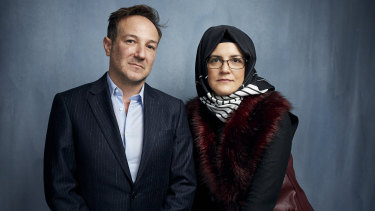 It was their misfortune that the room they chose for the murder was bugged. Khashoggi could be heard gasping; the worst part of it, chief prosecutor Irfan Fidan tells Fogel, was listening to the final sound of the bone saw. Eight people were later charged and convicted in a secret trial in Saudi Arabia but MBS has denied all knowledge of the murder. Three million people work for the Saudi government, he told a Western interviewer shown in the film. How could he know what they were all doing?

Fogel says he was driven to make The Dissident when he read news reports that didn’t ring true in the days following the murder. “There were a lot of false narratives coming forward. Namely that this guy was Muslim Brotherhood, that he had ties to al-Qaeda, that he was a terrorist sympathiser. If something happened to him, it was deserved.” Reading Khashoggi’s columns and prolific Twitter feed, however, “it was clear this guy was very far from a radical. He was arguing for free speech.”

Thus began his dive into the phone hacking, Twitter wars and mass incarcerations of a comprehensive state apparatus for which Khashoggi’s death was a shop window – because if you could kill him, says friend and former Al-Jazeera director-general Wadah Khanfar, “who can’t you kill?” Fogel spent months winning the confidence of Hatice Cengiz, the Turkish authorities, the United Nations rapporteur on human rights (who plays a significant role) and Omar Abdulaziz Al-Zahrani, a young Saudi activist living in Montreal. At one point, Omar is warned a gang is on its way to kill him. He just shrugs.

Amazon might have been a likely buyer for the film but founder Jeff Bezos, who bought the Post in 2013, was having his own battles with the Saudis after his phone was famously hacked by their spyware, which was apparently delivered directly via a text from MBS himself. And Netflix instead signed a production deal with the Saudi studio Telfaz11 for eight movies, according to Deadline. “As these companies become bigger and bigger, we’re seeing the choices they make, including content, become less and less risky,” Fogel told the Dow Jones online magazine MarketWatch. “When there’s huge money at stake, business interest, shareholder accountability, ‘what is going to make us vanilla and not cause us stress’, is winning over.”

It was months before the film’s sales agent cut a deal with theatrical distributors, including the model Fogel had once wanted to avoid. It is now available in the US on demand from, among others, Amazon Prime, and will be in cinemas in Australia from April 22.

Inevitably, there are aspects of the story that feel dated. Donald Trump is seen telling reporters, “I don’t like hearing about it … hopefully it will blow over” before vetoing a vote by Congress to stop arms sales to Saudi Arabia. In February, President Joe Biden stressed to MBS’s father King Salman “the importance the United States places on human rights and the rule of law” just as a US intelligence report named the Crown Prince as the instigator of Khashoggi’s murder.Some things have moved on, as they do.

In other respects, however, the film is absolutely of the moment. Only last week, The Guardian reported that Saudi agents infiltrated Twitter to identify an online satirist who had mocked the regime. He worked for the Red Crescent – the equivalent of the Red Cross – but that didn’t save him from a 20-year prison sentence. Omar Abdulaziz’s two brothers, who are kidnapped, imprisoned and tortured during the making of the documentary, remain in prison without charge along with 23 of his friends. He knows they are taking his punishment for him.

I wonder if Bryan Fogel has ever feared for his own safety and his answer surprises me. “I don’t see what the purpose would be,” he says. “I’m a journalist.” Other journalists covering the Khashoggi affair had their phones hacked and worse, he knows that. “But what good would it do? Them coming after me doesn’t change the film. It’s out there.”

The Dissident will be in cinemas around Australia from April 22.