The Reserve Bank has urged governments to deal with tax and social security policies to bring surging house prices under control after new figures showed the biggest jump in nationwide property values on record.

As the OECD said tax changes that skewed away from the housing sector would strengthen the economy and improve overall “household wellbeing”, RBA governor Philip Lowe said there were legitimate public policy issues around high property prices. 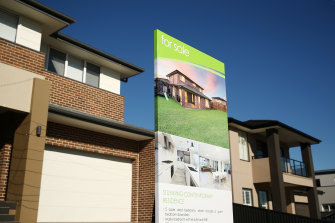 Australian Bureau of Statistics data showed a 6.7 per cent jump in the June quarter in its measure of house prices.Credit:Bloomberg

Data from the Australian Bureau of Statistics on Tuesday showed a 6.7 per cent jump in the June quarter in its measure of house prices. It was the largest three-month increase on record and took the annual increase to 16.8 per cent.

Canberra house prices, up 19.1 per cent over the past 12 months, are now increasing at their fastest rate on record. The slowest capital is Adelaide where prices still increased by 5.3 per cent in the quarter to be 14.2 per cent up over the year.

Dr Lowe, in a speech on the state of the economy, said an increase in interest rates to deal with surging house prices was not on the RBA’s agenda, arguing such a move would “mean fewer jobs and lower wages growth”.

He conceded there were public policy issues caused by high house prices, arguing those issues were best addressed by dealing with structural factors that pushed up the value of land.

“The factors include: the design of our taxation and social security systems; planning and zoning restrictions; the type of dwellings that are built; and the nature of our transportation networks,” he said.

“These are all obviously areas outside the domain of monetary policy and the central bank.”

Dr Lowe, who conceded low interest rates contributed to higher house prices, said based on current levels of inflation and wages growth the RBA was unlikely to lift rates until 2024.

The OECD, in its survey of the Australian economy released on Wednesday morning, identified two tax policies that were contributing to higher house prices.

It said the current 50 per cent capital gains tax discount was “very generous” and distorted investment decisions by skewing households to sink money into residential property.

Replacing the discount with a “cost-base indexation” model, which would sharply reduce the amount of gain excluded from any tax, would raise $4.1 billion in revenue over four years.

Another option suggested by the OECD was to exclude inherited properties from the capital gains tax discount system. Australia is one of the few nations in the world without an inheritance tax.

The OECD said the surge in house prices was also affecting other parts of the economy.

It noted the wealth of many pensioners had been inflated by the strong property market, but this group of people were still being paid the age pension as the family home was excluded from the pension assets test.

“Half of the government’s spending on the age pension currently goes to people with more than $500,000 in assets,” it said.