When I was a child, my family didn’t attend dawn ceremonies or military parades of any persuasion. If they were acknowledged at all, days like Anzac Day and Remembrance Day were celebrated by Dad leaving the house early to go to the pub, often not returning until long after we were in bed.

Standing on the outside, not engaging, not even particularly curious, as the years progressed, the way I thought about military celebrations was mixed at best. 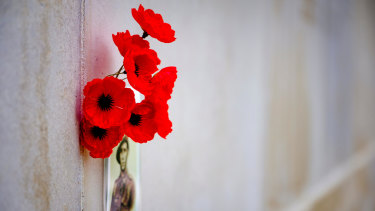 Remembrance Day is a time to remember what is often held at bay.Credit:Alamy

Over time, I grew tired of hearing politicians of all persuasions aligning themselves to these events in speeches about mateship and the great Aussie spirit. They spoke with the same tired analogies commentators used during football matches. It seemed to me that they wanted us to think of going to war as the equivalent of a good game of rugby.

As I grew older, I could not understand why our country spent money celebrating wars that happened so long ago when pressing problems like family violence and, indeed, support services for veterans and their families faced funding cuts. I didn’t know why these “war days”, as I thought of them, needed the airtime.

You would think having a dad who had fought in the Vietnam War would have given me a deeper understanding. But my dad, like many others who fought for their country, did not talk about his experience. On the rare occasions we learned about his war, it was in tiny snapshots, glimpsed from the corner of the eye, as if glaring at it directly might do us the same type of damage as staring directly at the sun.

As a child, my understanding that Dad had been to war seeped into my consciousness through mundane interactions from the relics he kept from his time served. Understand, these relics weren’t displayed as mementos or given the status of museum pieces. They were practical items used on a regular basis.

The massive 50-kilogram army tent with the wooden pole in the middle that nearly killed us each time we set it up (read: every single school holiday). It was "a lot better bloody quality than the flimsy nylon crap they make these days”.

The army-issue can openers – small blade swung open, rocking back and forth to jaggedly cleave lids from cans, with the spoon on the end to shovel in the contents – in use since 1969 and never replaced.

The camo green army shirt Dad wore to protect himself against the baking Queensland sun when he went fishing. These were things that Dad let us see about his war. The rest he protected us from, and I had no real interest in finding out more.

My lack of curiosity about Dad could almost entirely be attributed to my rage at the way he had treated our family growing up. Our entire household revolved around the violent swings of his mood, our every move second-guessed in case it set him off. If you got it wrong, you'd better watch out.

It wasn’t until I turned 30, and was pregnant with my first child, that I started to wonder if my father’s war experience had a part to play in his behaviour. But by then it was too late to ask. He died young, aged 52, when I was only 24, from melanoma cancer they said was related to his exposure to Agent Orange. He died having never received treatment for his post-traumatic stress disorder. He died before our bruised relationship had a chance to heal.

Remembrance Day is symbolised by the poppy, which flowered on the battlefields of World War I. It is commemorated on the 11th hour of the 11th day of the 11th month, the moment when hostilities ceased on the Western Front and is traditionally a day to remember the members of the armed forces who have died in the line of duty.

Occasions like Remembrance Day are precious moments for a group, who shared a profoundly traumatic collective experience, to come together to mourn. It is a tough day, when the memories kept at bay much of the time stand front and centre in consciousness. For me, it is a day I mourn the father I have lost, and the father I might have had, had my own not had the misfortune to have his birth date drawn out of a barrel and be sent to war.

If you attend these days and listen to the voices of people who have actually served, you will not hear people talking about guns or battle plans. You will hear people talk about friends lost, and what they might have done differently, and how the pain of loss does not end; it just gets bundled up and carried with us as best we can.

According to the Australian War Memorial, more than 100,000 Australians have lost their lives through war. Many more thousands than that number were wounded. The number who have served hovers between 800,000 and 900,000.

When you add to that number the partners and children who have been affected, then take into account the way the trauma of war reverberates through the generations, this is a day of mourning that affects many Australians. There is much we have lost through war. Remembrance Day helps us to take account. Lest we forget.

Ruth Clare is the author of Enemy: a daughter’s story of how her father brought the Vietnam War home.