At the windswept eastern tip of Victoria lies a remote marine wilderness on the front line of climate change and the warming of the Australia’s oceans.

About 20 kilometres from Mallacoota, Cape Howe Marine National Park interests scientists because of its proximity to the powerful East Australian Current, which travels down the eastern coast of Australia.

Climate change is strengthening this current and providing a dispersal method for tropical species to move into southern waters, including marine pests such as urchins. 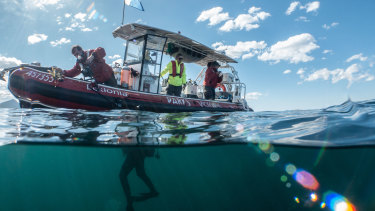 Keen to track these changes, scientists from Parks Victoria and Deakin University have been surveying reef life using remote underwater video cameras. Dive teams have also surveyed marine life to discover how this rich, underwater ecosystem is changing during climate change, and what this means for the rest of Victoria.

“With this area being at the forefront for climate change, what we see helps us forecast what might happen further along the coast, and help us make better decisions about how to manage the biodiversity and ecological values,” says Tess Hoinville, a marine diving and monitoring officer at Parks Victoria.

Simply reaching Cape Howe can be challenging: the dive survey sites sit at the edge of a vast continental shelf, buffeted by strong currents and waves.

But once divers sink below the surface, they float above rocky reef, seagrass, sponge beds and crayweed and common kelp forests. The area boasts an abundance of fish like wrasse and banded morwong, as well as octopus and Australian fur seals. 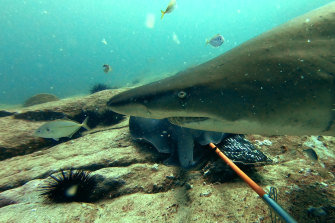 On the most recent survey, in April, divers were thrilled to see a very rare grey nurse shark. There are only two records of grey nurse shark sightings in Victoria, including one from Mallacoota Inlet in the early 1970s.

But they also saw species that likely travelled from further north on the warming current, like black sea urchins, a marine pest. This urchin has extended its historical range from NSW into eastern Victoria and Tasmania due to warming waters, with its larvae unable to survive in colder temperatures. 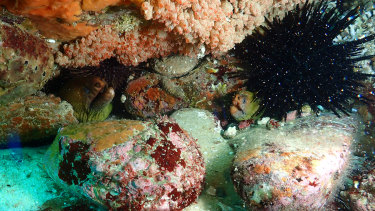 There has been an increase in the number of black sea urchins at Cape Howe.

By overgrazing the seaweed on a reef, these urchins create extensive “barrens”, leaving nothing but bare rock, which are unable to support marine life.

Despite the increased presence of urchins, Cape Howe is still incredibly diverse and rich in its fish species, says Daniel Ierodiaconou, an associate professor of marine science at Deakin University. 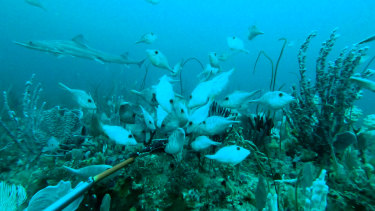 Cape Howe has some of the highest fish diversity of any part of Victorian waters.

There are some strategies that work to remove urchins. About 100 kilometres further east of Cape Howe, at Beware Reef, off the coast of Cape Conran, a successful program over two years has culled 25,000 black sea urchins. The kelp forests have regrown.

Speaking by phone on a ship returning from a Norfolk Island fish survey trip, Associate Professor Ierodiaconou said the fish diversity surveys were part of a national and global effort to use video technology under water to document diversity. “Often, it’s baseline information that we’re capturing for the very first time.”