“We need a break. We need some space right now.”

Braunwyn Windham-Burke and her husband Sean are taking some time apart.

During an Instagram Live on Monday night, the former “Real Housewives of Orange County” star and her husband revealed they are temporarily separating. 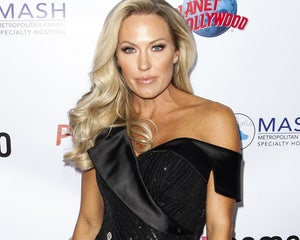 “We are packing up this house, the one we filmed in last year, and we are moving,” said Braunwyn, 43.

“He is moving into a furnished rental for a few months and I am taking the kids to Kauai for a while,” she continued. “We have decided jointly that we are going to take a few months apart.”

“We’re going to see what that’s like, living apart for a little while,” noted Sean, 48.

While Braunwyn will be living in Kauai, Sean will rent a home in Newport Beach. (The rental is owned by a friend of Braunwyn’s girlfriend, Fernanda Rocha.)

“What we are doing right now is really healthy for them. I am taking my kids for six or seven weeks and when they come back, they will have a place at their father’s,” Braunwyn explained.

“What we would like to do is when this is over, get a house that the kids stay in and then we might go [back and forth],” she said. “We haven’t decided if, after this little experiment of having a few months apart, if we are gonna come back together and live together as friends and family, or if we’re going to just keep the kids in the house and we’ll come in and out. … We need a break. We need some space right now.”

“We really want to do what’s best for us — we are family, we’ve been together for 26 years,” Braunwyn added. “That’s a lot and that’s something we don’t want to minimize — we want to honor that. I think having some space right now will give us some clarity.”

As shown on an episode of “RHOC” last November, Braunwyn and Sean renewed their vows to celebrate 20 years of marriage. However, in December, Braunwyn came out as a lesbian, saying at the time that she and Sean had no plans to divorce.