SARAH VINE: Without Kim Cattrall’s sass, this great TV comeback will be all City and no Sex

Sex And The City is back. The iconic series that had all us thirtysomething 1990s gals-about-town dashing home from cocktails at Nobu (actually lukewarm chardonnay down the Dog and Duck) is returning to the small screen.

Well, sort of. There’s no Kim Cattrall (man-eating sex-crazed sociopath Samantha). And they’ve changed the name, to And Just Like That . . . which, let’s face it, doesn’t have quite the chutzpah of the original.

Why they’ve done this is a bit of a mystery. Maybe some sort of copyright issue. Or maybe the producers just realised that without Samantha it’ll be all City and very little Sex. 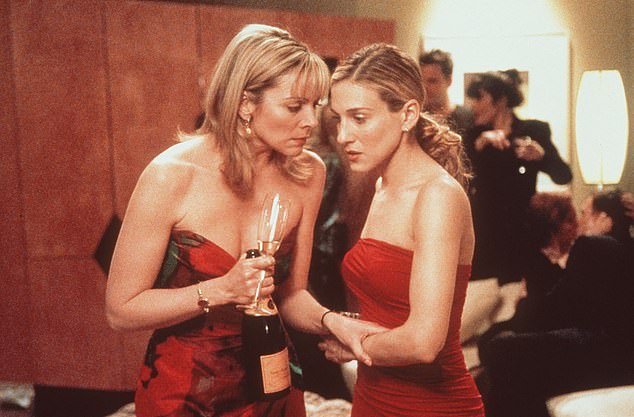 Sex And The City is back. The iconic series that had all us thirtysomething 1990s gals-about-town dashing home from cocktails at Nobu (actually lukewarm chardonnay down the Dog and Duck) is returning to the small screen. Pictured: Kim Cattrall as Samantha Jones and Sarah Jessica Parker as Carrie Bradshaw

Given the timeline, they might have been better off renaming it Slacks In The City. After all, our girls will be well into their mid-50s, and that’s what all the cool menopausals are wearing these days (see U.S. Vice President-Elect Kamala Harris on the cover of Vogue). Forget Wonderbras and $400 Manolos, it’s all about sturdy underpinnings and sneakers. A girl can’t very well attend a Biden rally in stilettos, can she (no matter how useful they may be for fighting off marauding Trump supporters)?

Plus, heels are hell on the joints when you’re taking the knee for Black Lives Matter.

Which brings me to what I think will be the main problem with this reboot (apart from the lack of Samantha, whose lust for life, not to mention anything with biceps and a pulse, prevented the original from disappearing up its own Fendi Baguette). How do you translate the glorious taboo-smashing excesses of the late 1990s into this era of woke? 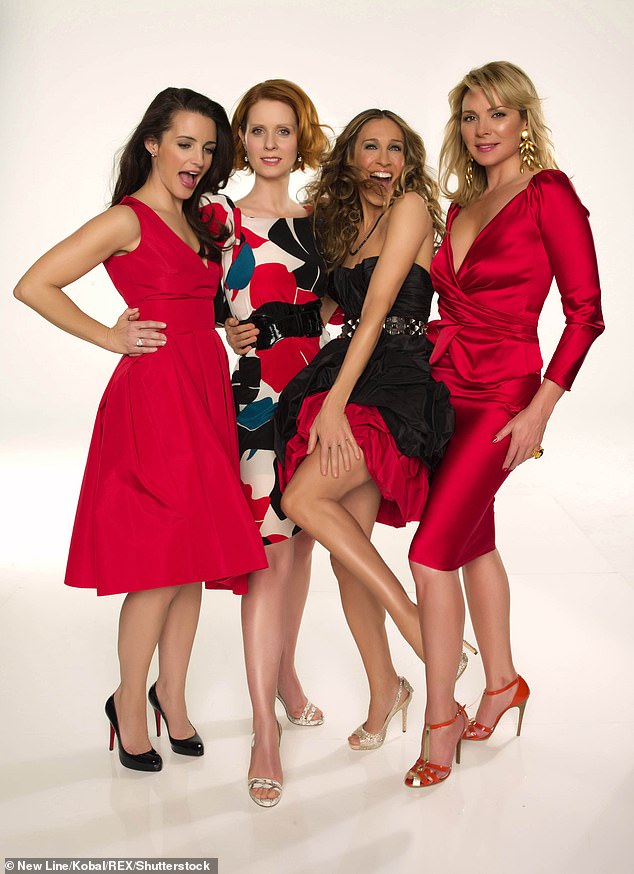 Or, to paraphrase Carrie herself: ‘I couldn’t help wondering: how do you drag a group of women raised on Cosmopolitans and one-night stands, who would trample over their own granny to get their hands on the last La Perla thong, into a New York where no one drinks, no one has sex, you need a medical exemption to get a pedicure and conspicuous consumption is a sin?’

I can picture our heroine now . . . stylishly attired in luxury loungewear, frown expertly softened by Botox, vegan nail polish tip-tapping away on the latest MacBook, circadian daylight lamp by her side, detox matcha green tea smoothie at her elbow.

Rather solemnly, she addresses her Twitter followers: ‘As the nurse’s test swab plunged vigorously up my nostril, I couldn’t help but think about Big. Even after all these years, I was as helpless to resist him as I was to fight off Covid-19. He had attached himself to my ACE-2 receptors, and there was nothing I could do to dislodge him. 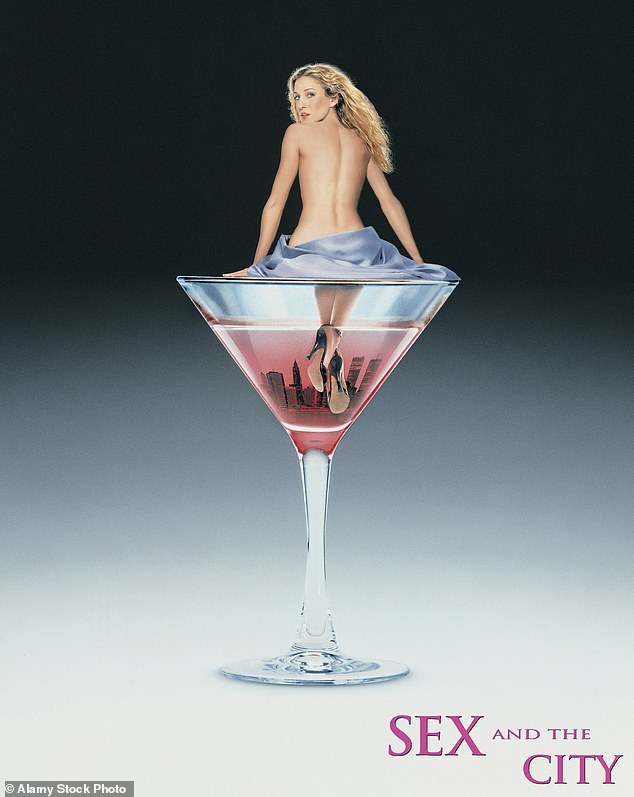 Carrie (pictured) was, like so many female characters in popular culture, a modern version of Elizabeth Bennet, an ambitious, feisty soul with a questing hear

‘And it got me thinking. When it comes to a passion pandemic, is there any way to socially distance yourself from toxic love? #covid19 #biglove #lateralflow.’

As a pastiche of neurotic Nineties New York, there was very little to beat Sex And The City. Dreamed up by Candace Bushnell, America’s answer to Helen Fielding (Carrie Bradshaw was always Bridget Jones’s thinner, better-dressed cousin), it perfectly captured the mood of the time.

Carrie was, like so many female characters in popular culture, a modern version of Elizabeth Bennet, an ambitious, feisty soul with a questing heart.

Tough on the outside, soft on the inside, she was a curious, confused — and confusing — mixture. One minute she was into emancipation, the next depilation — and there seemed, neither to her or to us, her acolytes, nothing strange about mixing the two.

Like all of us she was part-feminist, part-flake — and experienced an awful lot of just falling flat on her face. She was incorrigible and irresponsible. She would spend her rent money on shoes, and kept only champagne in her fridge.

She craved the security of a relationship, but was endlessly self-sabotaging, incapable of reconciling her instincts with her intellect. She captured, in perfectly shod form, all the anxieties and neuroses of my generation of women, torn between the conventions of the past and the challenges of the future, struggling to have it both ways — career and family — and failing to achieve either.

The series resonated because it raised uncomfortable questions — but in a glossy, sexy and entertaining way. It was sociology for style queens, philosophy for fashionistas. Every episode would spark a fierce water- cooler debate.

Looking back, it wasn’t exactly Aristotle; but somehow they got us talking. ‘Is it still possible to believe in love at first sight?’ ‘Can you ever be friends with an ex?’ ‘Do all women secretly just want to be rescued?’ ‘Can you take the politics out of sex?’ Can you ever really escape your past?’ And my personal favourite, ‘Are men just women with balls?’

If Carrie was everywoman, contemplating the questions that plagued us all, her three friends made up the trinity of her character.

Charlotte (Kristin Davis) played the part of her neuroses: a conformist people-pleaser, status-obsessed and materialistic. Miranda (Cynthia Nixon) was her intellect, her social conscience and her ambition. And Samantha (Cattrall) was, of course, her wild side . . . the uncompromising, uncomfortable, often embarrassing part of her she could never quite deny. That’s why I have little hope for this new version.

It’s not just that I can’t see how three middle-aged women discussing non-surgical facelifts, pilates, charity committees, children’s college choices and menopause solutions (as they inevitably will, because that is what we do) can ever live up to the original.

It’s because, for me, it was never Carrie who was the real heroine of the piece, it was Samantha.

She was the only one of the four who was truly, unashamedly herself. Who didn’t give a damn what others thought of her, who told the truth about being a woman in a man’s world — and to hell with the consequences.

She was bold and brave in ways that I (always a bit of a Miranda at heart) would never have dreamt of being, and I both envied and respected her for it.

She also had all the best lines. That time when Charlotte breathlessly informs her and Carrie that she and Trey are trying for a baby. Samantha’s response: ‘Why?’

So wicked, of course, but also, in many ways, an excellent question. And her empowering pep talks (‘Let it go, darling: if I worried about what every bitch thinks of me, I’d never leave the house’).

She was an example to all women of who we could be if only we dared to; of how much fun and power we could wield — if only we could stop feeling so guilty about ourselves.

That’s why it’s strangely pleasing that it should be Cattrall herself who is reportedly refusing to reprise the role.

So many actresses would accept through insecurity. But not Cattrall. She doesn’t want to do it, doesn’t need to do it — and so she won’t do it, no matter how inconvenient that is for everyone else. And good on her.

In any case, who can blame her? She’s nearly a decade older than the others, and who wants to be running around in their underwear at that age, chugging cocktails with your bingo wings flapping in the wind?

Not to mention all the modern-day indignities, from vaginal steaming to mindfulness that will no doubt feature in the updated version. The idea of a woke Samantha is like Father Christmas without a beard. Unthinkable.

No, I prefer to remember her as she was. Full-throated and unapologetic, very possibly eating sushi off the buttocks of some sculpted young Adonis, in dark glasses and a wide-brimmed hat.