Brewster was in Mississippi covering Hurricane Ida when someone ran at him, urging him to “report it accurately.”

The winds of Hurricane Ida weren’t the only thing MSNBC reporter Shaquille Brewster had to contend with while doing a live shot in Gulfport, Mississippi on Monday.

After anchor Craig Melvin tossed to Brewster on the beach in MI, the reporter was talking about the aftermath of the storm when, out of nowhere, a man ran up and accosted him.

Brewster was reporting on how the mail delivery in town had starting to return to normal and noted that people were now out walking their dogs on the beach, when a white pickup truck pulled up behind him. A man then jumped out of the vehicle and came running toward both Brewster and the cameraman, shouting at them both.

While Shaq was a pro and moved so the man would be out of the view of the camera, the guy kept yelling at him to “report it accurately.” Fed up with the annoying off-camera chatter, Brewster then decided to throw back to Melvin in studio — before the man was seen charging toward the reporter and getting into this face.

“We’re gonna check in with Shaq Brewster and make sure all is well,” Melvin promised from the studio. “There’s a lot of crazy out there, a lot of crazy. We’ll make sure Shaq’s okay.” 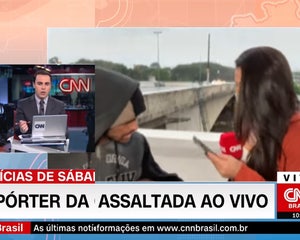 A few minutes later, he followed through on that promise.

“You probably saw or heard a few moments ago, one of our correspondents was disrupted by some wacky guy during his live shot there in Mississippi,” he told viewers. “Pleased to report that Shaquille Brewster is just fine. Shaq is okay.”

Brewster confirmed that account on Twitter, writing, “Appreciate the concern guys. The team and I are all good!”

Melvin went on to call the man’s behavior “beyond unacceptable and disgusting,” saying Brewster was only “trying to do his job.” He added, “Shaq is okay. This guy who nearly attacked him clearly is not.”