The male singer performed at the High Point Rockers baseball game, in North Carolina, US, on Sunday.

Footage of the performance has since been circulating on the internet after the man appeared to forget the words.

The bloke, pictured in a pink blazer, begins singing The Star-Spangled Banner.

Sadly, he muddles up his words a lie in and has to enlist the help of the crowd.

Despite him encouraging a team effort, he was greeted with boos and moans from the spectators.

But the best was yet to come.

When the man attempted to hit a high note in the well-loved anthem, his voice cracked before dwindling down.

Echoes of the crowd’s singing are heard, with the chap jumping in to sing the odd word or two.

The etiquette for the duration of the American national anthem expects individuals to stand to attention and face the flag if there is one. 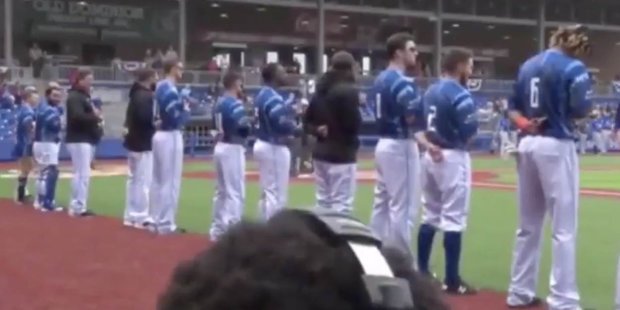 One person commented: “Arrest this man.”

Another said: “This hurts my ears.”

Others described it as “disrespectful”.

“His hand isn’t even on his heart, it’s on the wrong side,” one person added.

Some didn’t disapprove of the man’s singing however, one person said: “I’m so glad I got to witness this in person.”

It comes after a cat bit it’s owner in an attempt to stop his “terrible singing”.