A treasure trove of British history can now be owned by you as the Sitwell family are auctioning contents of their Northamptonshire manor house, Grade II-listed Weston Hall at Weston, near Towcester Weston Hall.

The Sitwells were once among the most celebrated of British society families with their much-loved home proving to be the perfect place to host glamorous parties.

The late-17th-century stone house, which stands in 49 acres of gardens and woodland and was the family home of journalist and renowned food critic and MasterChef judge William Sitwell, sold last year after he and his brother, baronet and film producer Sir George struggled with the costs of the upkeep.

And now, several items – including a love letter to Napoleon’s younger sister, a Tiepolo drawing discovered in the safe and clothes and jewels that adorned the writer Dame Edith Sitwell, known for shocking society with her eccentric behaviour and fashion sense – are set to go up for auction at Dreweatts on November 16. 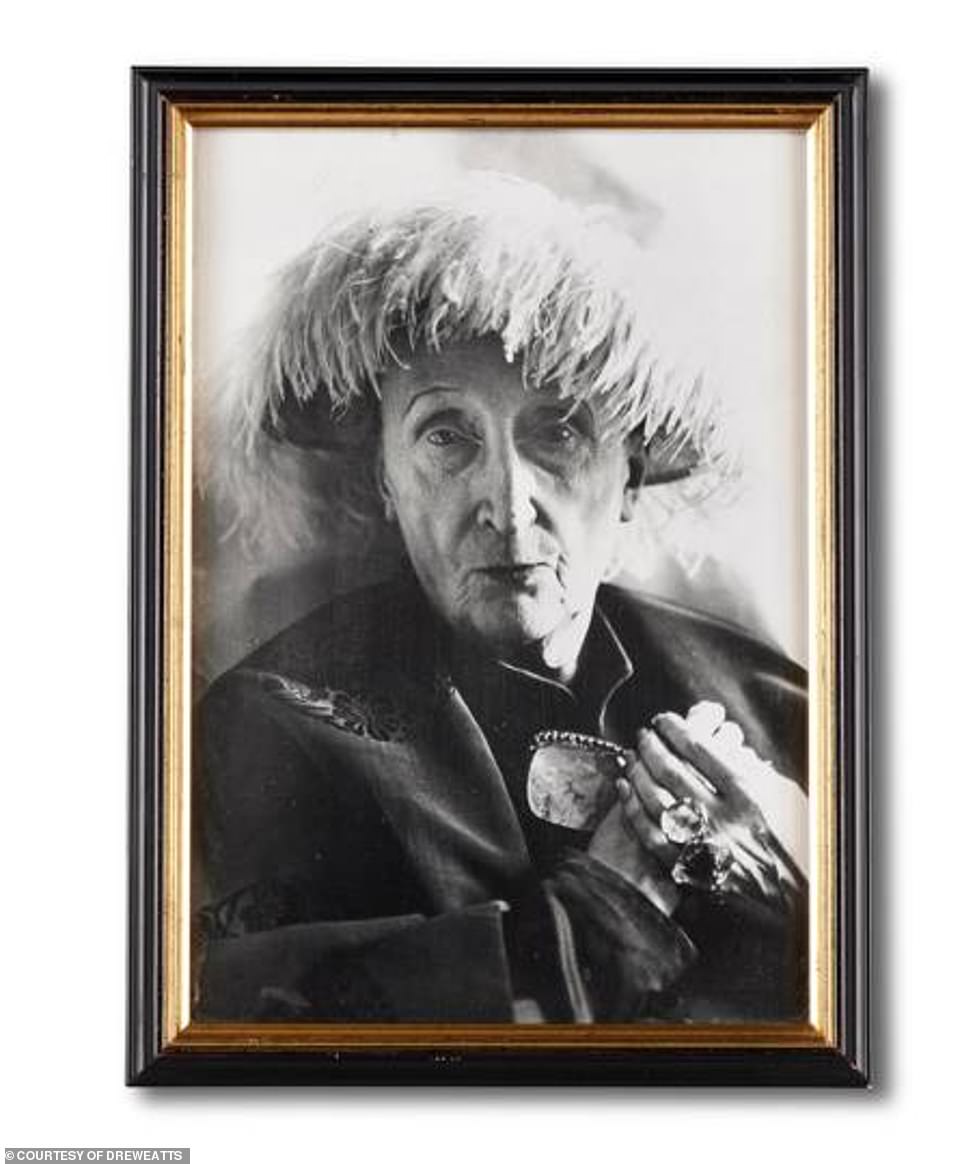 The hat, seen in the above print of a photograph by Edith’s great friend, the photographer Cecil Beaton, is being offered in the sale

A white ostrich feather wide hat, worn buy Dame Edith in her iconic portraits by Cecil Beaton, being offered with an estimate of £500-£700 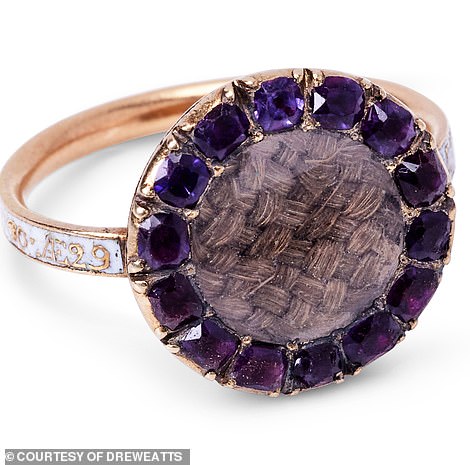 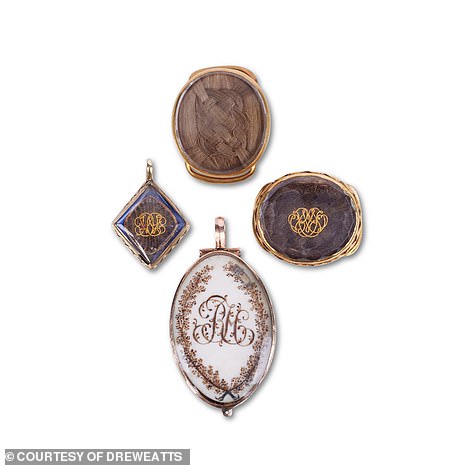 A gold George III amethyst, enamel and hairwork mourning ring dating from 1760, dedicated to Mary Barnardiston, £400-600 (left) and (right) a small selection of 18th century hairwork mourning jewels and hair mementos being offered with an estimate of £600-£800

The sale charts the history of an eminent family of esteemed writers, eccentrics, pioneers and creatives through the centuries.

Joe Robinson, Head of House Sales at Dreweatts, commented: ‘Weston Hall was a fascinating encapsulation of not just the Sitwell family history, but also the social history of Britain over the last few centuries.

‘With the extensive collection of works having been preserved in the house for so long, it has been thrilling to go on a journey of discovery with the family, to uncover so many hidden treasures with such wonderful provenance.

The stories behind the works truly enrich the pieces and when you purchase a work from this sale, you know you are buying a true piece of history.’ 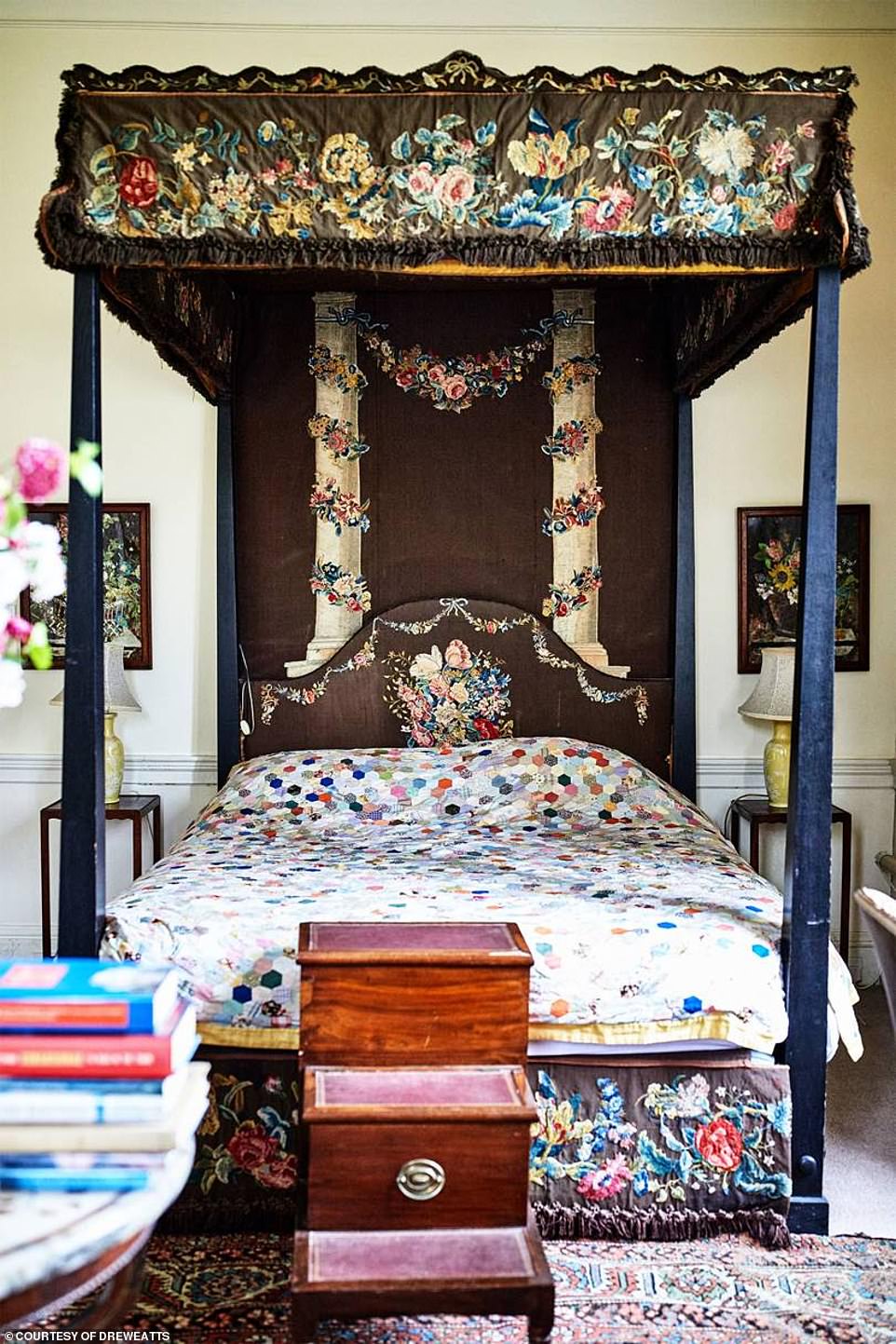 Also worthy of note is an ebonised oak four-poster bed incorporating decorative George III needle work hangings. It will be offered in the sale and carries an estimate of £8,000-£12,000 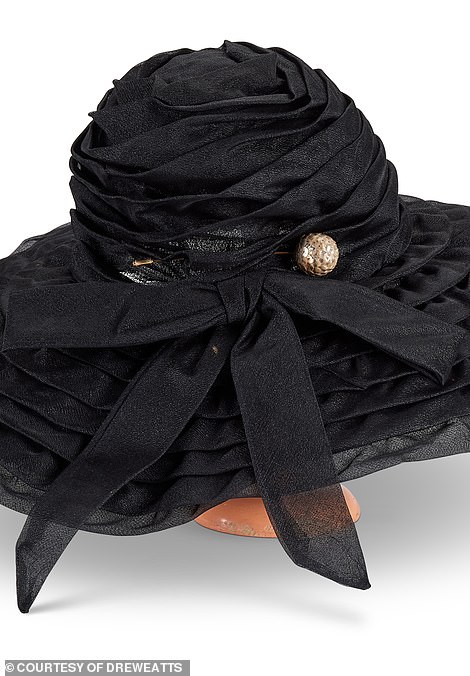 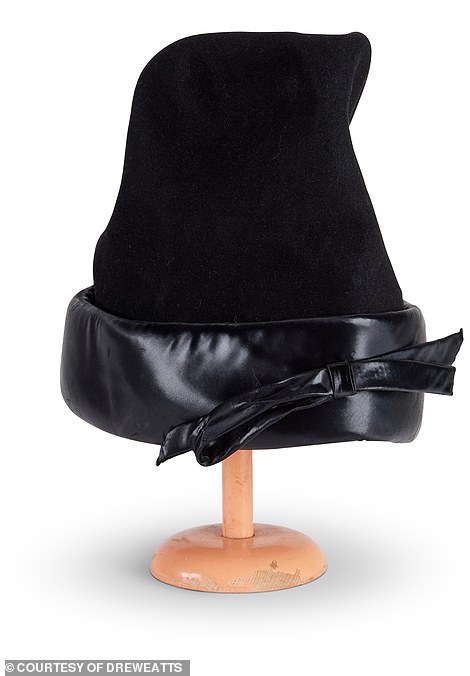 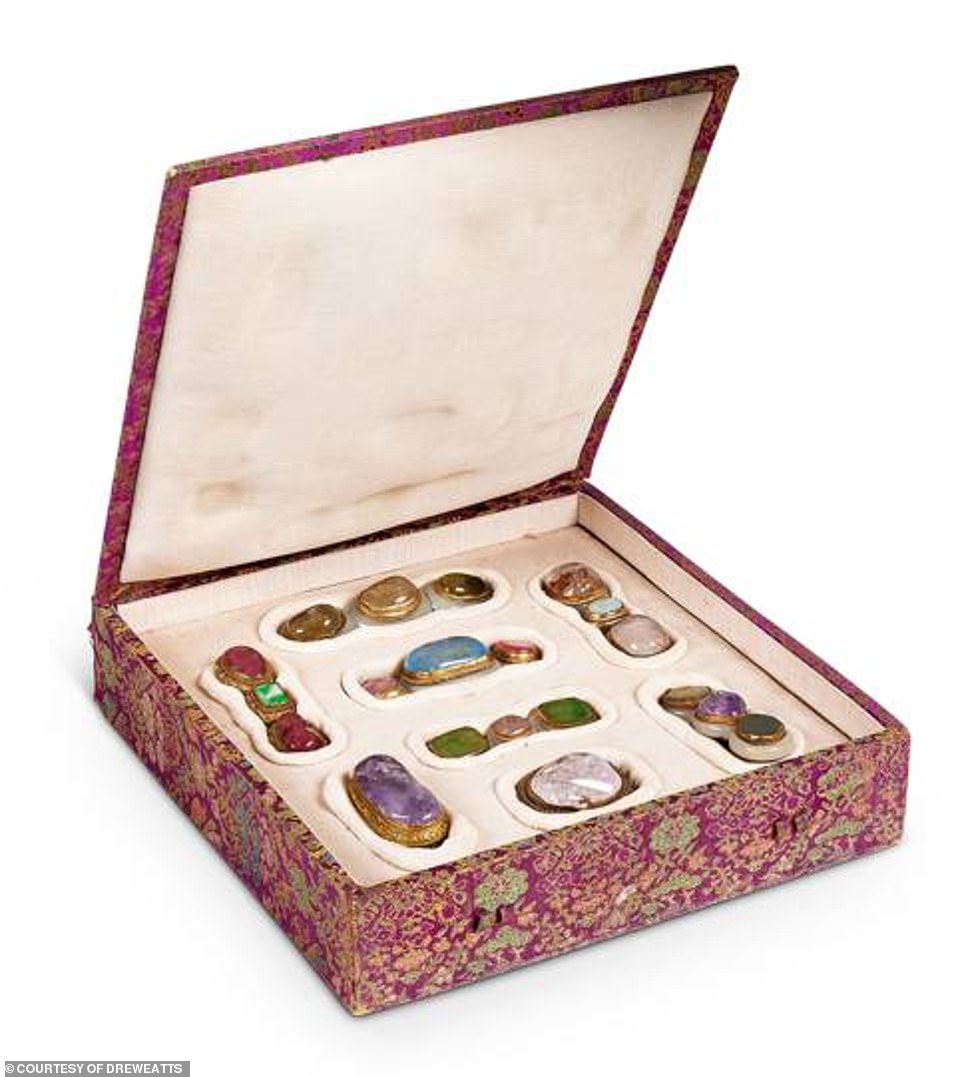 A selection of eight Qing Dynasty, 19th century Chinese gilt-copper mounted semi-precious stone and jadeite brooches, which are thought to be a gift from Sir Osbert Sitwell in 1934, are expected to fetch around £4,000

One such discovery was of Dame Edith Sitwell’s clothes in the attic, which are included in the sale, alongside some of her jewellery.

A large rusty old trunk in one of the house’s attics revealed love letters from several women, to a married soldier in the 1800s, believed to be Colonel Henry Hely-Hutchinson, who had lived at Weston Hall with his wife Harriet Wrightson.

The Colonel had a romantic affair with Napoleon’s younger sister Pauline Borghese, who sent love tokens to him, which were found in the house, including a fan and a pair of kid skin gloves in a walnut shell.

Amongst other finds include a series of books for both cooking and ailments from the 17th to the 18th centuries, as well as general tips for maintaining a home.

William Sitwell and his mother have relayed the tale of how Susanna Jennens, who was the first of the Sitwell ancestors to occupy the house in the 1740s, had a dream that was so vivid, she wrote it down. 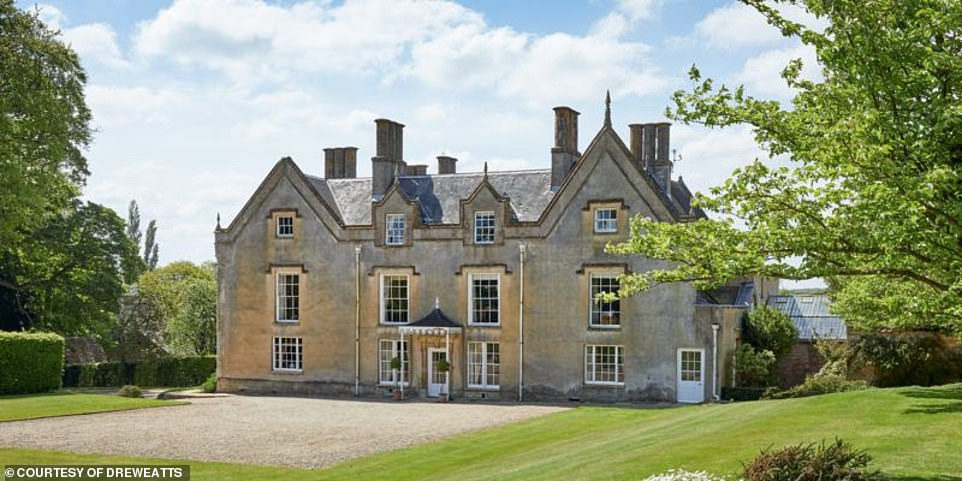 The late-17th-century stone house (pictured), which stands in 49 acres of gardens and woodland and was the family home of journalist and renowned food critic and MasterChef judge William Sitwell, sold last year after he and his brother, baronet and film producer Sir George struggled with the costs of the upkeep

A dress worn by Dame Edith at the London film premier of My Fair Lady which is estimated to fetch between £80-£120 at auction (left) and right, a heavy curt velvet damask tunic form gown, worth £100-£150

In the dream Susanna recounted receiving a note to say that her sister had suddenly died. The note mentioned a secret drawer in the cabinet that had some valuable jewellery hidden in it.

Susanna popped the note into a bedside drawer, recounting the strange dream to a friend a few days later, then forgetting about it.

Two years later Susanna did indeed receive a note to say that her sister had died. Her friend reminded her of her dream and they immediately set about finding the secret drawer in the cabinet, unsure if it really existed. Eventually they found it and sure enough tucked away inside were some valuable jewels.

The cabinet still features Susanna’s note in the drawer and will be offered in the sale with an estimate of £2,000-£3,000. 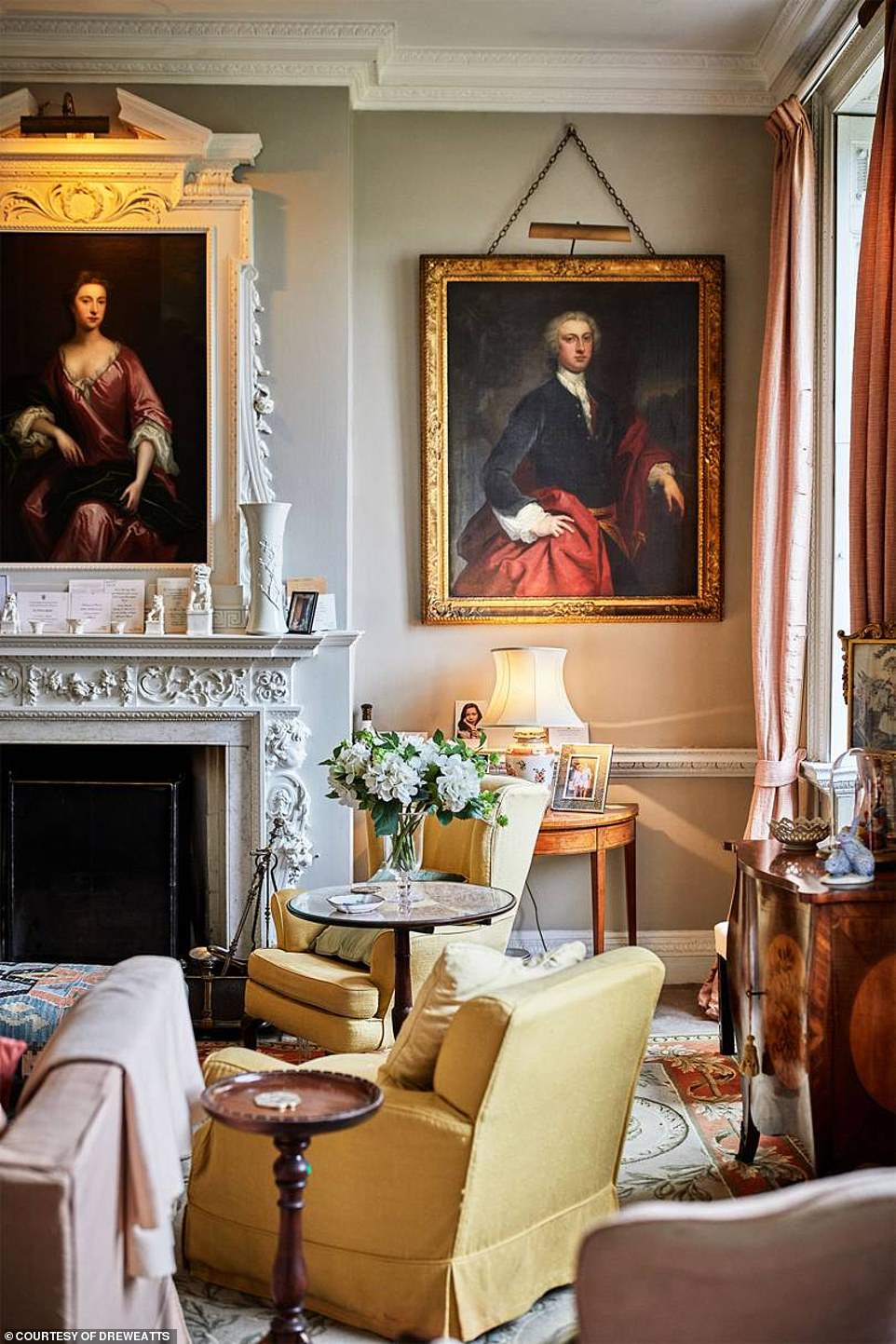 It’s been in the Sitwell family for 300-years and comes complete with lavish gardens, a swimming pool and tennis court

The stunning crewel needlework, carried out by Susanna Jennens, was popular in the 17th and 18th centuries and is a technique that is over a thousand years old. Highly decorative, the bed has ribbon-tied floral drapes and a tester with twin columns, which is joined by a ribbon-tied swag, as well as an ornate pelmet and valance in crewel work needlework.

The needlework was carried out by Mrs Jennens in the 18th century and comprised a full suite of furniture for the room. In the 19th century Georgia, Lady Sitwell used the curtains, also in the same crewel work, to cover a set of chairs that adorned the room. The impressive bed, which carries at estimate of £8,000-£12,000, was housed in a bedroom particularly favoured by Dame Edith Sitwell on her visits.

As well as being quite an eccentric character, Edith Sitwell was known for her bohemian dress sense.

One of her favourite hats is being offered in the sale, this is the famous hat she wore during a sitting with Cecil Beaton. A statement feather trimmed hat in Christian Dior style, which dates from the 1960s and is estimated to fetch £30-£50. 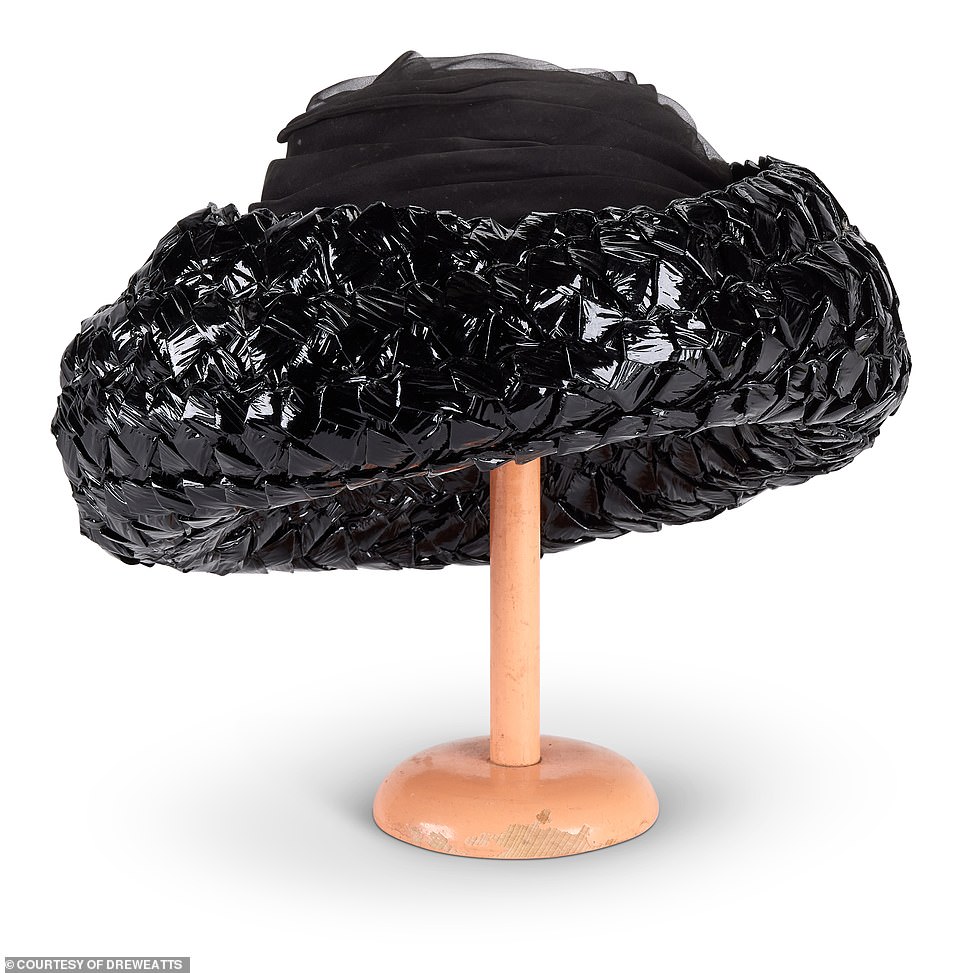 A black glazed raffia and gauze hat with a turned-up rim and hat pin, also estimated to fetch £100-£150 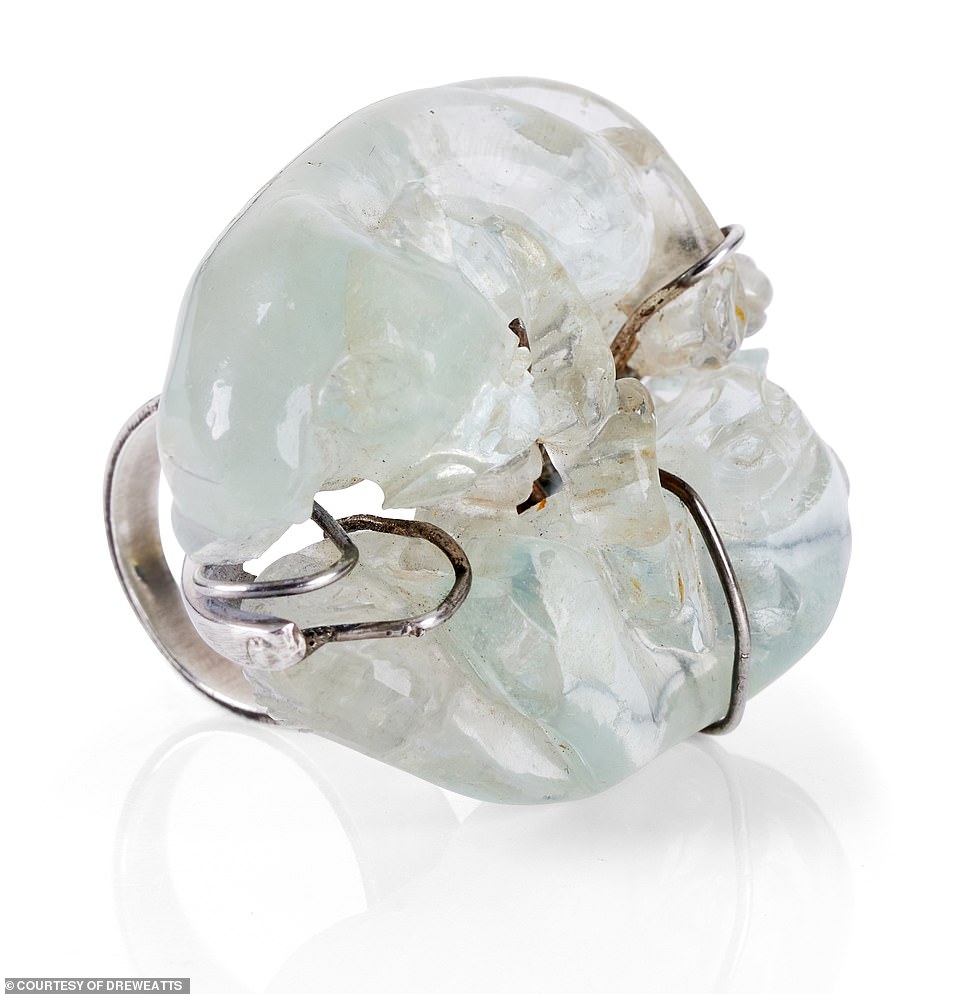 A carved fluorite dress ring from the 19th century is expected to fetch in excess of £800-£1,200 (pictured)

There are several pieces of Dame Edith’s clothing and jewellery in the sale, including a plush gown that she wore to the premiere of the musical My Fair Lady in 1965, which she attended with her nephew, Francis Sitwell.

The silk brocade dress in black, pink and green carries a conservative estimate of £80-£100.

Among Edith’s jewellery in the sale is a carved fluorite dress ring featuring two mythical beasts, described by The National Portrait Gallery in the 1994 exhibition titled, The Sitwells and the Arts of the 1920s and 1930s, as of 19th century Chinese workmanship and is believed to have been in Edith’s possession by 1950. It is estimated to fetch £800-£1,200.

A selection of eight 19th century Chinese gilt-copper mounted semi-precious stone and jadeite brooches, converted from buckles are believed to have been brought back from China as a gift, by Edith’s brother Osbert Sitwell in 1934. The group is estimated to fetch £3,000-£4,000.

Among important art works in the sale is an important old master drawing by one of the greatest decorative painters of eighteenth-century Europe, the Italian artist Giovanni Batista Tiepolo.

The work features Punchinello, the hook-nosed, humpbacked clowns who were one of the stock characters taken from the Commedia dell’ Arte, an early form of professional theatre, which began in Italy in the 16th century and became popular across Europe. It is estimated to fetch £150,000-£200,000.

Amongst other works, is Nativity Scene in a Mountainous Landscape, after Poussin. The work is in oil on canvas and is estimated to fetch £3,000-£4,000.

The sale includes several works by the Italian painter Gino Severini, including the design for a dust jacket for the book Cyder Feast, published in 1927 and one of over 50 volumes of poetry and 50 works on art, music, architecture and travel, written by Sacheverell Sitwell. 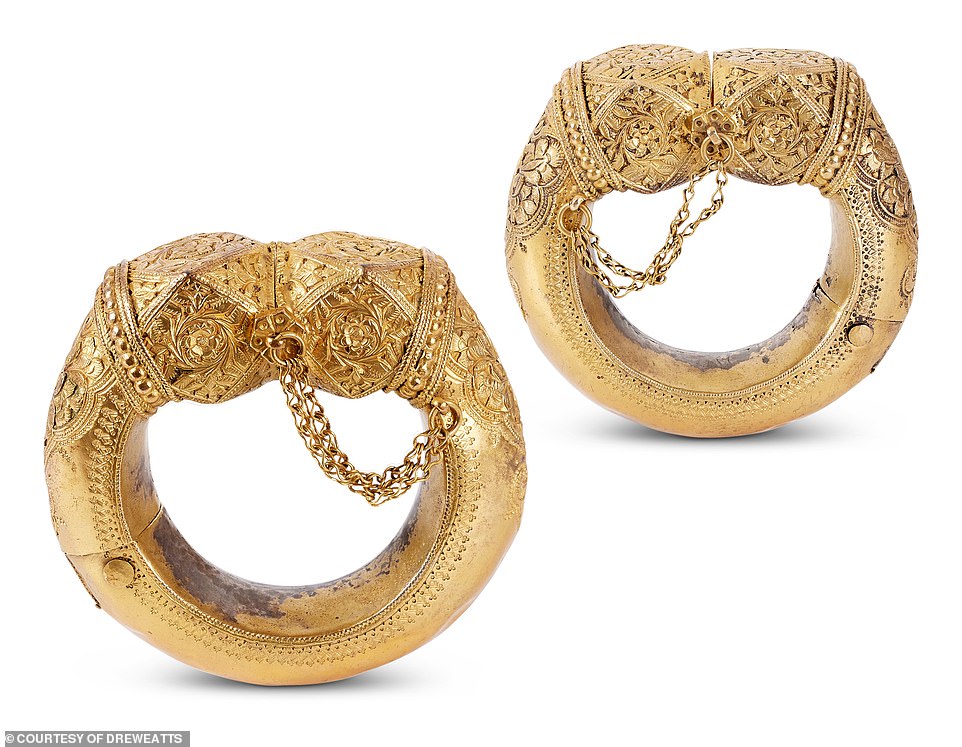 A pair of silver gilt Indian bangles being offered for sale with an estimate of £700-£1,000 (pictured) 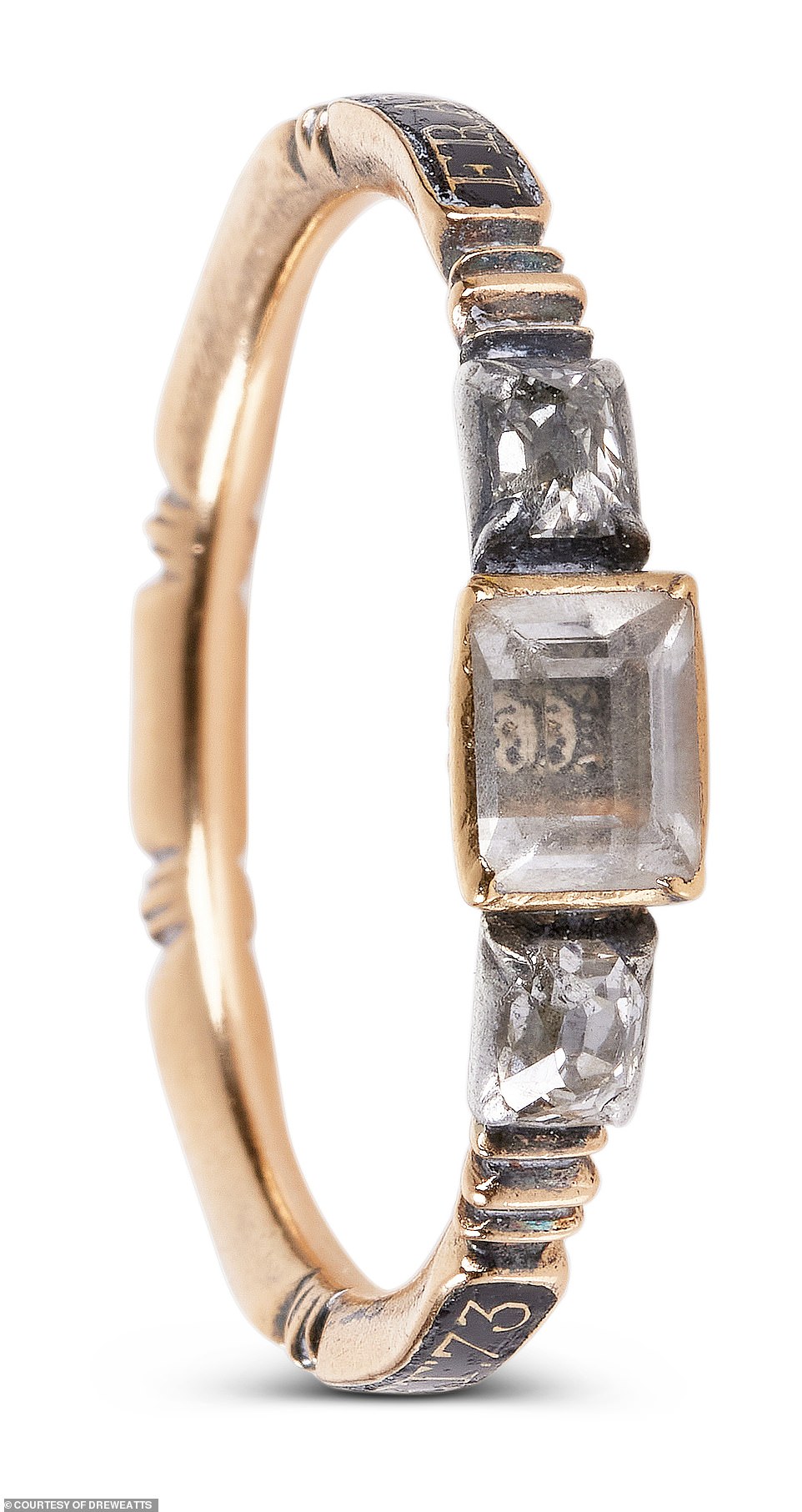 The sale will also feature an array of portraits of the Sitwell family’s ancestors through the centuries, by important artists. These include an oil portrait of Anne, Lady Blencowe seated and holding a spray of orange blossom. From the circle of Sir Godfrey Kneller, it is estimated to fetch £2,000-£3,000.

As well as a superb selection of fine art, this extensive sale, which is described as a living museum of British history, also includes Chinese works from several periods, decorative arts, furniture, ceramics, silver, militaria, period clothes and textiles, jewellery, toys, including a charming rocking horse and an extensive collection of books from Weston Hall’s 18th century library.

However perhaps one of the most unusual items, is a Victorian Brougham carriage painted in blue and black, with a cream trimming to its interior.

Commenting on the sale, William Sitwell said: ‘This sale offers countless individuals and collectors the chance to own items and collections that are part of the fabric of English history. I

t’s extraordinarily diverse, representing the wide interests and experiences of my family and our ancestors. After the sadness of leaving Weston it will be heart-warming to think that works of art and furniture, which are like so many close friends to myself and my family, will find new homes and become part of new, wonderful collections.’

The current generation of the Sitwell family tried hard to keep Weston Hall going, however after many initiatives, such as supper clubs, AirBnB hosting and guided tours, it wasn’t to be and it was finally sold last year after being a family seat for more than 300 years.