Prime Minister Scott Morrison’s plan for a $600 million gas plant is facing fresh doubts about its financial viability as experts question its ability to deliver a return on investment without driving up energy bills.

Monash University senior research fellow Ross Gawler modelled the operating costs of the 660 megawatt Kurri Kurri plant in NSW’s Hunter Valley and said it would deliver a $150 million loss each year for 20 years, totalling $3 billion, unless Snowy engaged in surge pricing to sell power at a high cost when there were shortfalls in the network. 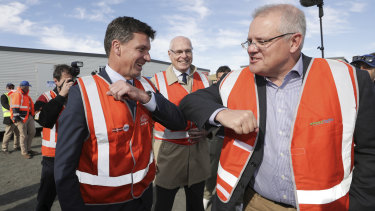 Energy and Emissions Minister Angus Taylor and Prime Minister Scott Morrison announced in May that the federal government would fund a $600 million gas plant in NSW’s Hunter Valley.Credit: Alex Ellinghausen

“Our modelling shows that either Snowy Hydro will lose money on the Kurri Kurri gas plant, because of the increased supply in the National Electricity Market, or it would have to game the market and charge higher prices in periods of peak demand – costing NSW businesses and consumers,” Mr Gawler said.

Snowy Hydro chief executive Paul Broad rejected Mr Gawler’s analysis and said there will be enough future demand in the market for Kurri Kurri to make a sustainable return on taxpayers’ money.

However, due to commercial sensitivities in contract negotiations, it’s unclear when the business case will be released, which means Snowy cannot fully detail how it will operate in the market.

As the share of weather-dependent renewables in the energy grid grows, so does the need for backup on-demand power from gas, batteries or pumped hydro. There is heated debate over the need for gas in firming up renewable supply, which creates carbon emissions, and the ability of batteries to replace it.

Mr Broad said Kurri Kurri would not be propped up by capitalising on “market volatility” by selling high-priced power into the spot market, but rather support lower prices by offering competitive contracts to energy users.

“Increasing supply will have the effect of driving down electricity prices, and will provide the necessary dispatchable ‘firmed’ energy, ensuring security and stability to support the volatility that arises from intermittent renewables,” Mr Broad said.

“Third-party modelling that doesn’t reflect this is based on a fundamental misunderstanding of our business and will not be accurate or reliable.”

Energy Minister Angus Taylor said in May that recent shortfalls in the market, which resulted in the Tomago aluminium smelter in the Hunter Valley powering down, provided a glimpse of what was in store if the Liddell coal-fired power station shuts down in 2023.

“We have just seen exactly what will happen if we don’t have replacement capacity,” Mr Taylor said at the time.

Mr Taylor has said 1000 megawatts of extra on-demand energy, also known as dispatchable capacity, is required to replace Liddell. He said on Tuesday Kurri Kurri was based on a strong business case and “will deliver the dispatchable capacity needed to keep prices low and the lights on”.

Grattan Institute energy program director Tony Wood has argued there will not be a supply shortfall, and if Kurri Kurri delivers an additional 660 megawatts to the market it would out-compete existing coal-fired power plants and push them to early closure.

Mr Broad told a Senate Estimates hearing in May the existing Colongra gas plant had the capacity to fill Tomago’s shortfall, but Tomago did not have an existing supply contract with Colongra. Snowy offered to sell electricity at the maximum permitted rate of $14,000 a megawatt-hour but that was too expensive for the smelter, which is why it shut down some of its production.