Pretty in pink! Countess of Wessex stuns in a pastel dress as she delivers a speech about the advancement of eye health during her tour of India

The Countess of Wessex looked glowing in a pretty pink dress as she gave a speech to celebrate the collaborative efforts to advance eye health in India today.

Sophie, 54, was attending the British High Commission reception in New Delhi in her role as Vice Patron of the Queen’s Diamond Jubilee Trust.

During her speech she reflected on the progress achieved already by the Trust and encouraged efforts to continue and be upscaled.

The cause is close to the mother-of-two’s heart, as her daughter with Prince Edward, Lady Louise Windsor, 15, was born with a severe squint that affected her vision.

She wore an ankle-length pastel-coloured dress for the formal occasion and donned a dark pink patchwork scarf over her left shoulder. 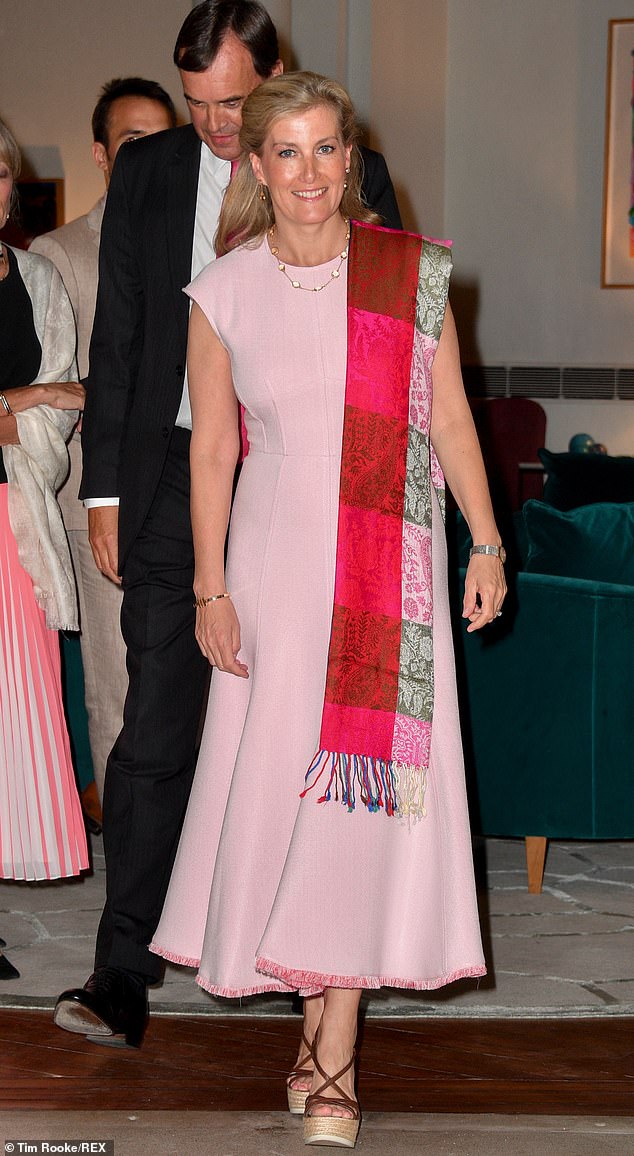 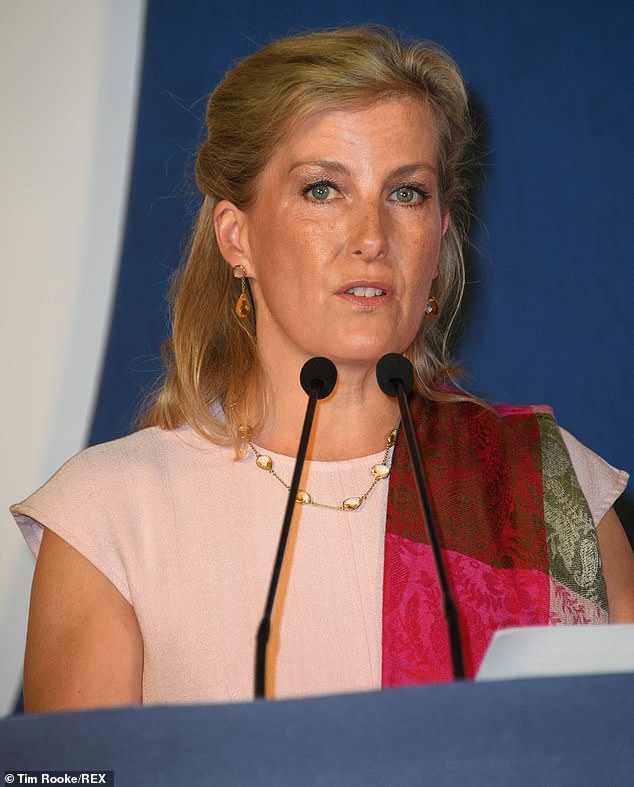 Sophie, pictured, delivered a speech to celebrate the collaborative efforts of the UK and India to advance eye health in India

Sophie also wore a pair of strappy brown wedge shoes and some delicate jewellery to complement her outfit.

The reception also recognised the ambition to create a Vision Catalyst Fund driven by public and private sector organisations.

These groups are coming together to accelerate health system change and to expand universal eye health coverage across the globe.

The Countess of Wessex chatted with several guests at the event as well as giving a speech. She is due to return to the UK on Friday May 3. 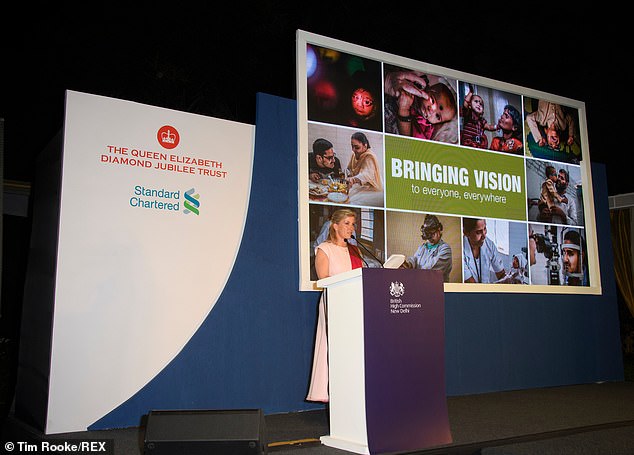 The mother-of-two, pictured during her speech, is in India in her role as Vice Patron of The Queen Elizabeth Diamond Jubilee Trust which was established in 2012 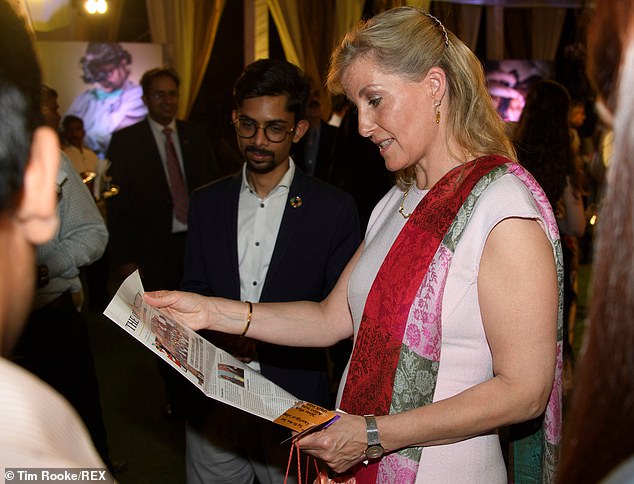 Sophie, pictured, spoke with several people at the event and could be seen looking over a newspaper

Yesterday Sophie donned a traditional bindi and floral garland when she met with members of the OSCAR foundation (Organisation for Social Change, Awareness and Responsibility), a non-profit that helps children and youths through football.

The Countess looked relaxed in a blue t-shirt and patterned trousers with black and white sandals.

Everyone seemed in great spirits as the children and the royal joked together, and hugged several times.

The leaders of the organisation then accompanied her to Sassoon Dock’s fish market, where she met with women and fishermen and admired their products.

The Queen’s daughter-in-law then headed to the memorial for the 2008 Mumbai terrorist attacks, also known as the 26/11.

She laid a wreath in the memorial before pausing for a moment of recollection in honour of the victims. 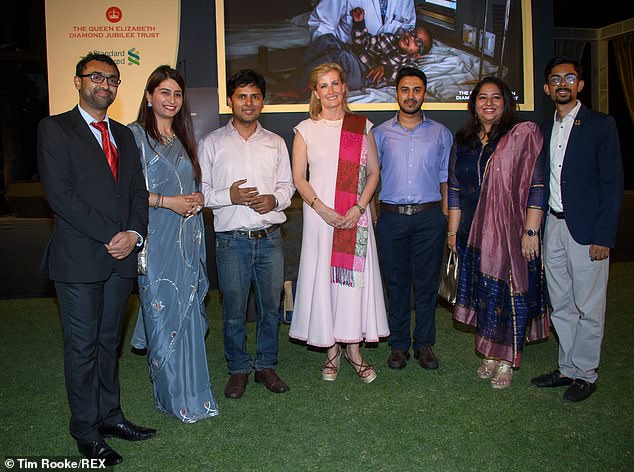 Sophie, 54, pictured with guests at the event tonight, is due to return to the UK tomorrow following her tour of India 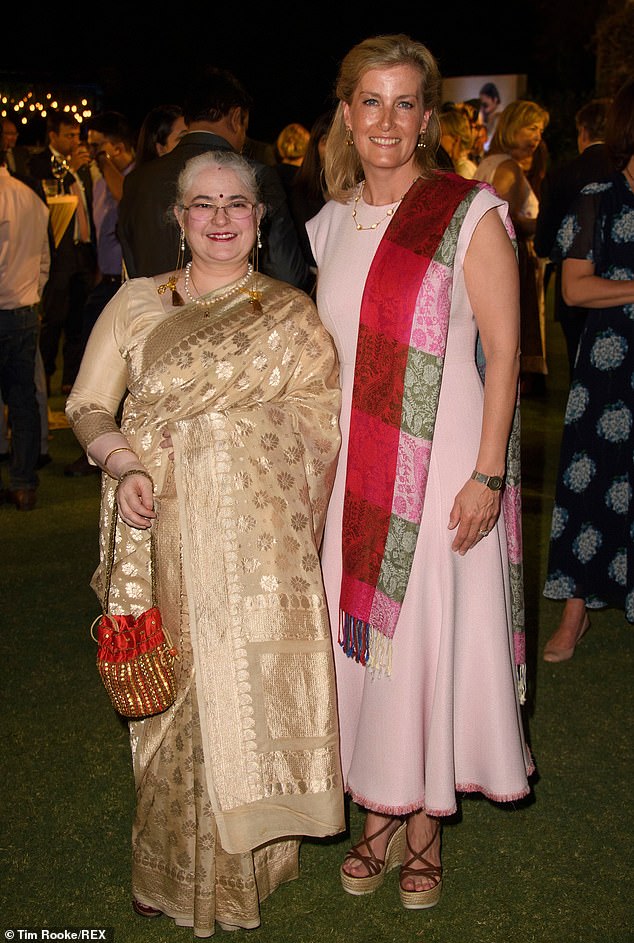 The royal, pictured with another guest at the reception, wore her blonde hair down and clipped back tonight 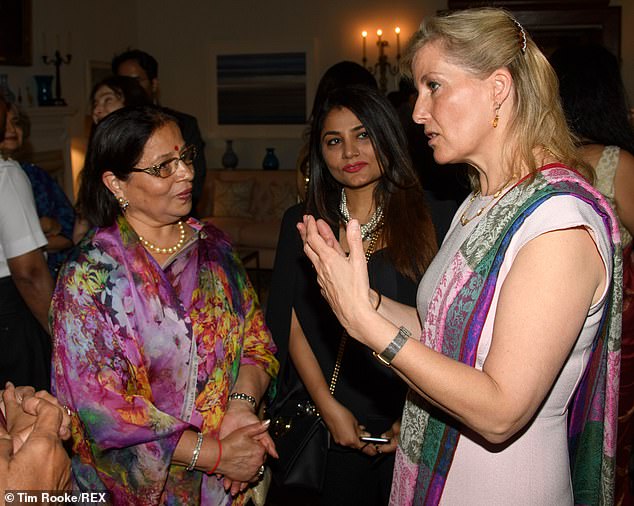 The reception also recognised the ambition to create a Vision Catalyst Fund driven by public and private sector organisations. Sophie is pictured talking with more guests

On the final leg of her tour, Sophie will join a round-table discussion to share ideas on how the UK and India can work more collaboratively in tackling challenges relating to gender-based violence in conflict.

Sophie will also learn about the Women on Wheels initiative, which empowers young women from poorer communities to become professional drivers to enable them to have better employment opportunities.

The royal will conclude the visit by attending a reception celebrating a cross-section of remarkable women living and working in India.

The Queen Elizabeth Diamond Jubilee Trust is a time-limited charitable foundation, established in 2012, to mark and celebrate the Queen’s 60-year contribution to the Commonwealth at the time of Her Majesty’s Diamond Jubilee. 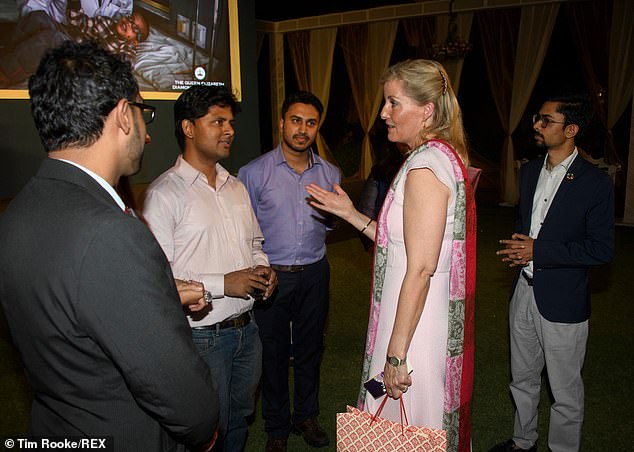 Sophie, pictured right, looked enthralled by the conversation with a group of guests who had listened to her speech about eye health in India 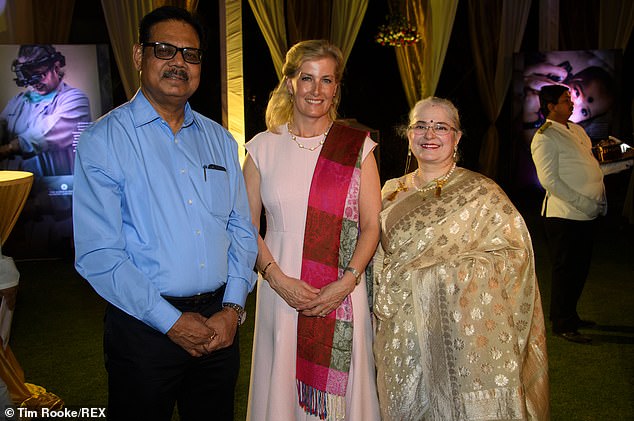 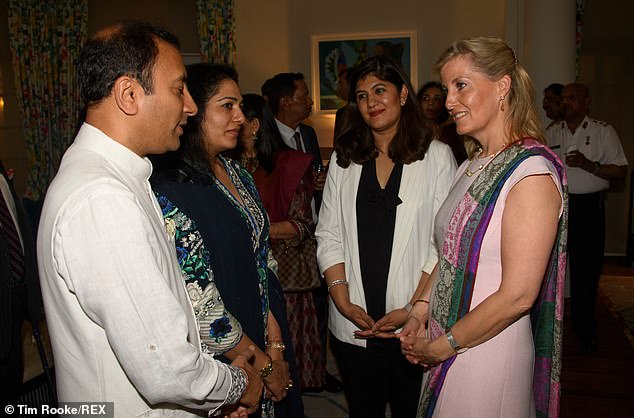 Sophie, right, wore a patchwork patterned scarf over her left shoulder during the event as she engaged in conversation

The Trust works in alliance towards eliminating avoidable blindness and to empower a new generation of young leaders.

To enable the Trust to make a tangible and sustainable difference in the name of The Queen within five years, its programmes have focused on tackling three major causes of preventable sight loss – blindness caused by trachoma, the world’s leading infectious cause of blindness; blindness caused by diabetes; and blindness affecting premature babies.

Every year 60 exceptional young leaders were chosen each year from across the Commonwealth to become Queen’s Young Leaders, with the last cohort awarded this honour by The Queen in 2018 in recognition of the remarkable changes they had brought about to improve people’s lives.