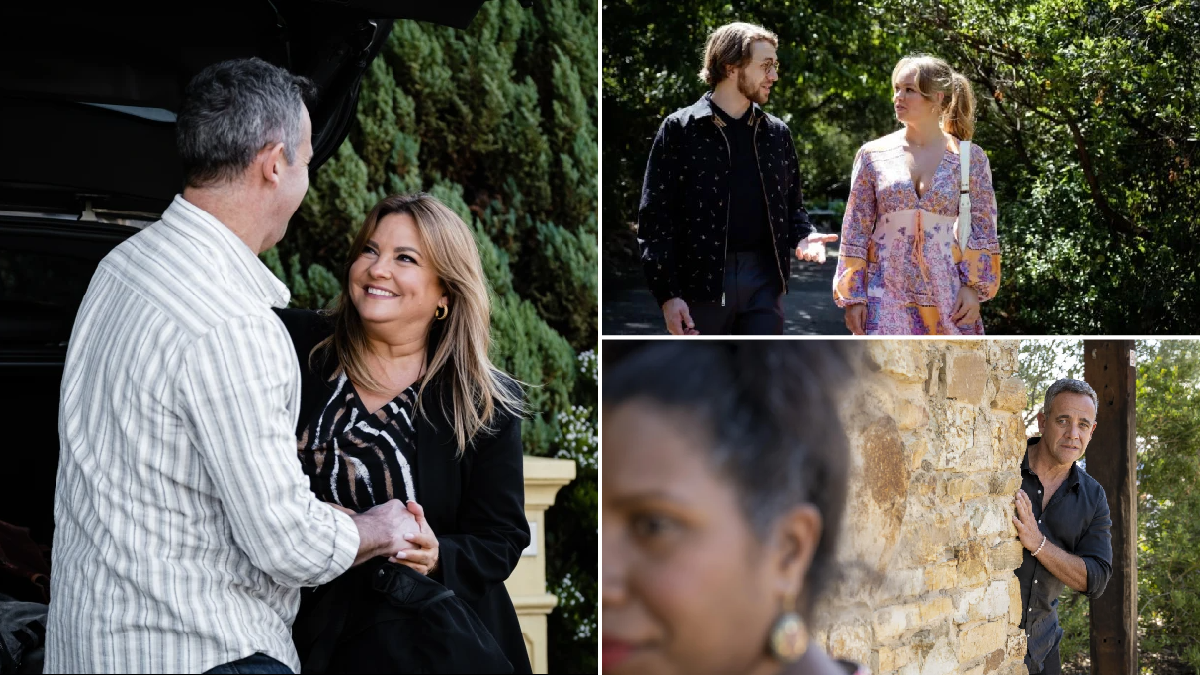 Secrets and lies can be killers, and they very well may turn out to be in Neighbours this week. Harlow (Jemma Donovan) has no idea what she’s getting herself in for with Corey (Laurence Boxhall), Glen’s (Richard Huggett) lies are on the edge of discovery, and Terese (Rebekah Elmaloglou) is heading for disaster.

Harlow is clueless about the mess she’s getting herself in and that’s because Core appears to be one clever cookie, expertly covering the trail of what he’s really up to. He’s in town for a reason, and it’s not to get her into bed, despite what she may think.

Glen is about to come face to face with the one person who can open the can of worms about Kiri’s (Gemma Bird Matheson) paternity. What will happen when his secret gets out and how far will he go to stop it?

In contrast to all of the dangerous lies going on, the truth won’t always set you free either. David (Takaya Honda) makes a huge decision about his future that will leave Aaron reeling.

Here’s what’s ahead in Neighbours.

Harlow in danger from The Order

After finally realising she can’t have Ned, Harlow looks towards Corey for romance. They start seeing each other but unfortunately, the sexual chemistry amounts to exactly zero. She is forced to let him down gently and, weirdly, he takes it very well without being the slightest bit upset. Red flag number one. This acceptance of rejection has Harlow wondering if she’s made the wrong decision and is surprised to learn that despite being given the elbow, Corey decides to stay in Erinsborough. What she doesn’t know is that the reason is he has a job to do – to pull her into The Order. He’s seen secretly handing a USB to someone in The Order. What’s he up to and what’s on that memory stick?

Love for Glen and Terese?

Nic and Chloe are getting too close to the truth, so Glen tries to throw them off his trail by confessing his love for Terese. Naïve Chloe totally believes this fib and relays it to a shocked Terese. She confronts Glen and tells him she definitely does not feel the same, and he quickly backpedals by explaining it was just a lie to save his neck. They’re both appear relieved, but is there more to it?

Freya is facing possible jailtime and with that hanging over her, she badly wants to make things right with Levi. Trouble is, he’s having none of it. He’s so fed up with her lies that he tells her he is done. Having reflected on it, he feels she’s caused nothing but issues and he wants out. Freya is devastated but accepts his decision, knowing that she’s been through worse and can get through this too. She decides enough is enough, it’s time to leave and head to Echuca.

While Freya admits defeat, David is also ready to give up. He is disengaging with his lawyer, which is sending alarm bells to Aaron. He can see his husband is losing himself by thinking he deserves everything he gets, and Aaron knows now is the time to fight. He tries to fix things by offering Freya work at the Shed and getting David a meeting with Clive. But both well-meant plans go belly up. Is Aaron losing his family?

Terese is heading for disaster

Terese is super excited for Fashion Week and the hype she’s managed to create for it, so decides to really push the boat out. Little does she know, Montana is on the verge of being arrested, which sill mean disaster for her. Terese convinces Montana to loosen the purse strings and let her push things even further, but in doing so, she’s slowly sealing her own fate.

What’s up with Mackenzie?

Mackenzie is fast becoming someone Hendrix doesn’t recognise. She is becoming more and more flaky, which is becoming a problem regarding her studies and their relationship. He airs his frustrations, and she takes it that he is being unsupportive. The two butt heads and refuse to back down. Are they heading for disaster?

Glen thinks he’s calmed down the scent-sniffing from Chloe and Nic, but just as he gets comfortable, a new spanner falls in the works. Kiri’s mum comes to town – the one person who can truly identify him. When she shows up at the vineyard to surprise Kiri, he somehow manages to avoid his secret being discovered so soon, but later Kiri invites him to dinner to meet her mum and he finds himself in a bit of a bind. He spins a yarn to get out of it, but Nic is right there ready to pick up the scent of falsehoods again. She catches him out and has it confirmed there is something amiss. So she ramps up her super sleuthing to the highest level. And now someone else is set to get suspicious – Glen’s own brother Paul. He sees Glen and Terese looking a little too close for his liking and decides to have a little dig into what his brother is up to.