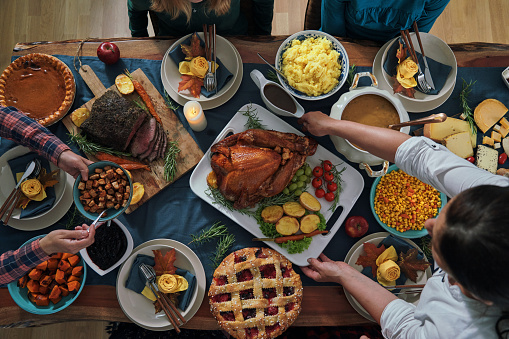 ‘So you sit around with your family and eat turkey, how is that any different from Christmas?’ asked my husband.

As an American, I loved Thanksgiving growing up, and living in the UK doesn’t stop me celebrating. But when I first suggested it to my husband, James, he wasn’t sold.

As we made our way to a friend’s house in 2019, he grumbled about ‘the bastardisation of British dishes’.

Filled with American optimism, I ignored his grumblings. If he just gave it a chance, I knew he’d enjoy the celebrations.

And indeed once we arrived at a house of happily chatting Americans, and dogs trotting around in the hope of a few sneaky bites of dinner, he started to cheer up. By the time we’d eaten, he was in awe of the ‘un-Britishly moist and juicy’ turkey.

Now, I am firmly of the belief that this American holiday needs to become a British fixture.

Every year, starting on the fourth Thursday of November, the people of the US take a long weekend to celebrate and give thanks. Sometimes it can just be having gratitude for being able to see relatives, who might have travelled thousands of miles across the US. Other times we give thanks for our health.

It is as simple and lovely as that, and unlike Christmas there’s no exchange of presents. A positive and non-materialistic holiday, where all the family get together, is something that seems to be missing from the British annual calendar.

So instead of creating a new one, I think Brits should start to adopt Thanksgiving, which is happening this week.

I loved Thanksgiving growing up. When I was a kid, though, before I properly understood its history, Thanksgiving meant finishing school early on a Wednesday in late November, and piling onto a train the next day to see my godparents.

I remember the hugs and the excited dog that would greet us as we arrived at their house. Us kids would blow off steam by running around outside, while the adults caught up over martinis.

Then it was the best part: the controlled chaos of Thanksgiving morning. Everyone would help with meal prep. While the turkey was in the oven, roasting away, we would sit and watch the Macy’s Thanksgiving Day Parade, which is quite a spectacle if you haven’t seen it before. There are giant balloons and performances from popular bands and singers.

When the food was ready, all of us would gather around the dining room table. The meal would start with everyone stating what we were thankful for. We’d all quickly devolve into fits of laughter as someone shared a funny anecdote.

Later, after this culinary delight, there would be a walk in the woods. It’s one of my favourite childhood memories.

So, when I moved to the UK four years ago to study for my MBA at the University of Cambridge, there was never a question that I’d stop celebrating Thanksgiving.

I’m one of around 166,000 Americans living in the UK, and in my experience, other US expats would also be hard-pressed to give up the holiday.

Since being here, I have managed to convince a handful of UK friends to mark the day by inviting them to dinner. Going in with an open mind, they too have enjoyed it.

Thanksgiving is now James’ favourite US holiday, and not just because of the food. ‘It just makes sense to have two major holidays back-to-back to spend with family,’ he says. ‘Why try and fit it all in over Christmas where inevitably someone gets disappointed?’

I agree – and there are also a lot of benefits to having a holiday where the focus is merely on giving thanks and spending time with your family.

There’s also no need to stress where you’ll spend Christmas when you have Thanksgiving a mere month before. No more picking one set of in-laws over the other.

Of course, the holiday does have a dark history and you can’t talk about Thanksgiving without understanding this. I am a descendant of the original Puritan separatists who arrived on the Mayflower and celebrated that first Thanksgiving in 1621.

My ancestors would have starved to death without the help of the Wampanoag people. However, the Native Americans were treated horribly in return, and we need to remember this. To continue to whitewash it is irresponsible.

If Brits were to adopt this holiday too, they would need to be aware of the history, while focusing on how the day now is about giving thanks and spending time with family.

Over the past four years, I have noticed an increase in the level of acknowledgement here in the UK. Even my local butcher is offering Thanksgiving turkeys. Certainly there are far more restaurants offering a hearty meal to those who celebrate. I’m hopeful that one day Thanksgiving will be as commonplace here.

Brits and Americans share a ‘special relationship’. Let us ‘yanks’ share with you this holiday. We’d love to have you join us at the table! And if you’re like my husband, who never warmed to the Macy’s Day Parade (‘weird cartoon balloons’ was his description), the NFL game is also an option.

It is time for Thanksgiving to be included in the UK’s yearly celebrations. Embrace this time to celebrate with family.

This year James and I (along with some relatives) will be heading to an American restaurant in London where we will tuck into some turkey. Hopefully we will see you there!