To be perfectly honest, I spent my first Monday in May glued to the E! livestream of the red carpet, judging celebrity looks while I myself wore my pajamas, and I’ve got zero regrets about it. Just because I, too, wasn’t dressed in head to toe couture, doesn’t mean I don’t know a thing or two about camp! As a former English major forced to read Susan Sontag time and time again, I’m here to present to you an official list of the best dressed celebs at the 2019 Met Gala, according to me, myself, and my understanding of camp based off the copy of Sontag’s essay I kept from college. Call me the camp counselor, because I’m the unofficial authority on who really managed to pull off a camp-appropriate look, and I’m showing no mercy.

If you still don’t understand this year’s theme, here’s why I won’t judge you: Apparently, lots of people who attended didn’t get it, either. Basically everyone in attendance at the Met Gala looked fab, but only a small percentage of celebs really understood the notion of camp and went full force when it came to their ensembles. To those who did, I applaud you! To those who didn’t…Welp, maybe next time, Karlie Kloss. And while I’d love nothing more than to go full nerd right now and break down what is and isn’t camp in a double-spaced term paper, I’ll let the celebs that did nail the theme do the work for me. Read on to see who delivered the most camp looks of the night. 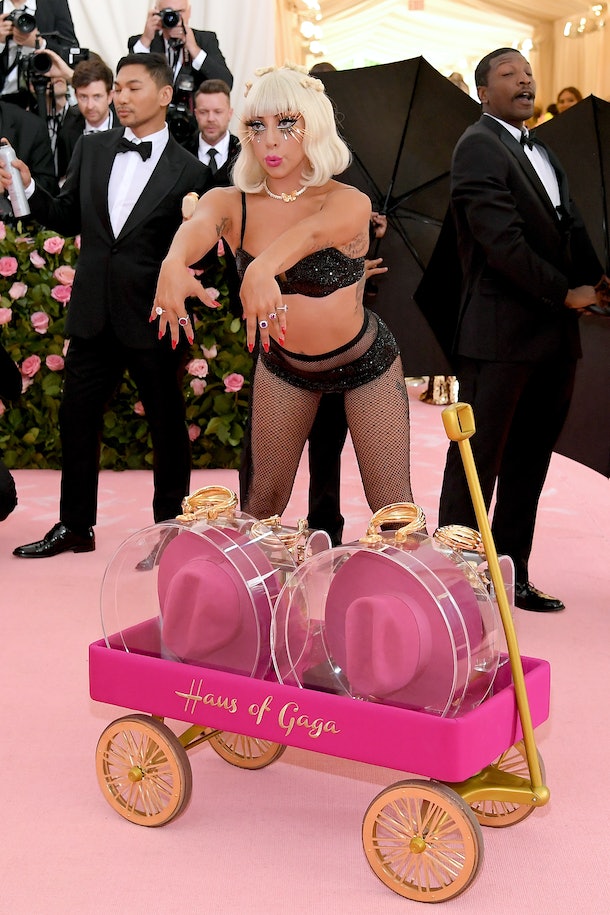 To be clear, it wasn’t the design of any of Gaga’s four Brandon Maxwell looks in particular that made her pink carpet moment camp, but rather, the number of looks itself, as well as the performative quick changes. To strip down three times and have accessories to match each look, from an old-school cell phone to an umbrella to a pink wagon full of cowboy hats and champagne? That’s some BCE (Big Camp Energy), and I hope you understand why. The drag-inspired beauty look was a nice touch, too. 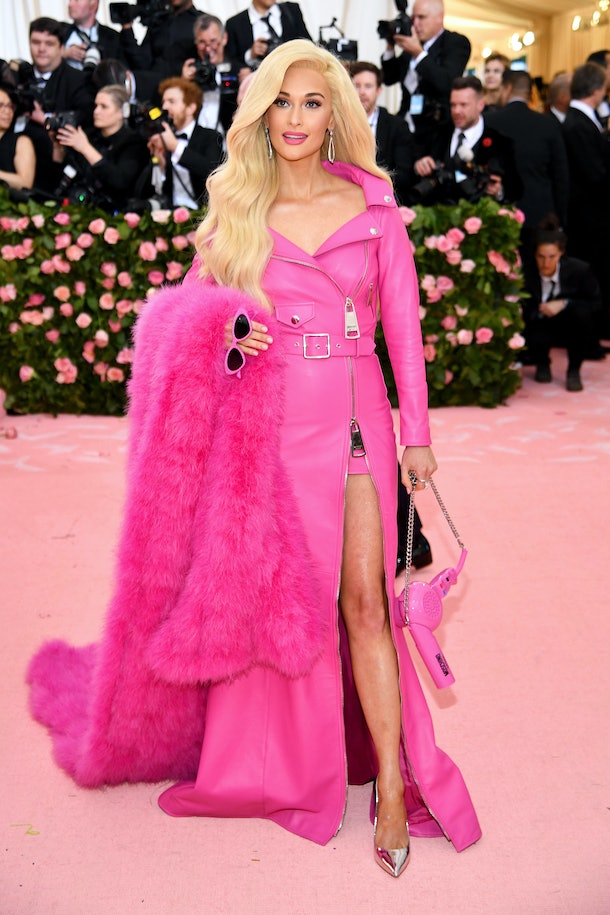 The night’s other camp queen was Kacey Musgraves, who served gorgeous, eerie vibes as a lifesize Moschino Barbie. There’s something creepy about how accurately Musgraves resembles the plastic doll, but she also looks stunning, and for these contrasting reasons, her look is camp to the max. 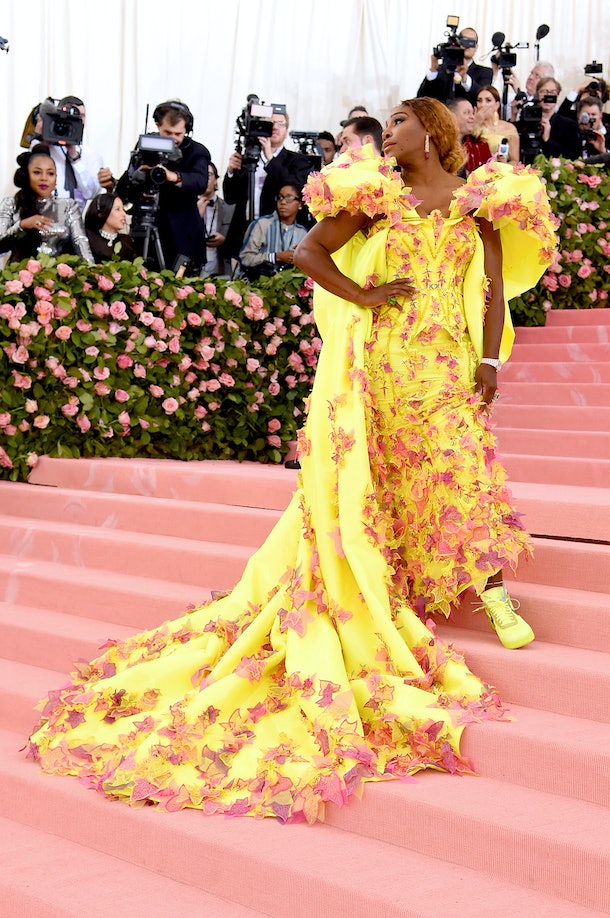 OK OK, I admit that while Williams blew me away, her look didn’t strike me as camp at first. To be clear, not everything over-the-top and bold is camp! However, when she lifted up the ornate ballgown and revealed perfectly matching athletic trainers (Off White X Nike kicks, to be exact.), my campy heart breathed a sigh of relief. Nailed it. 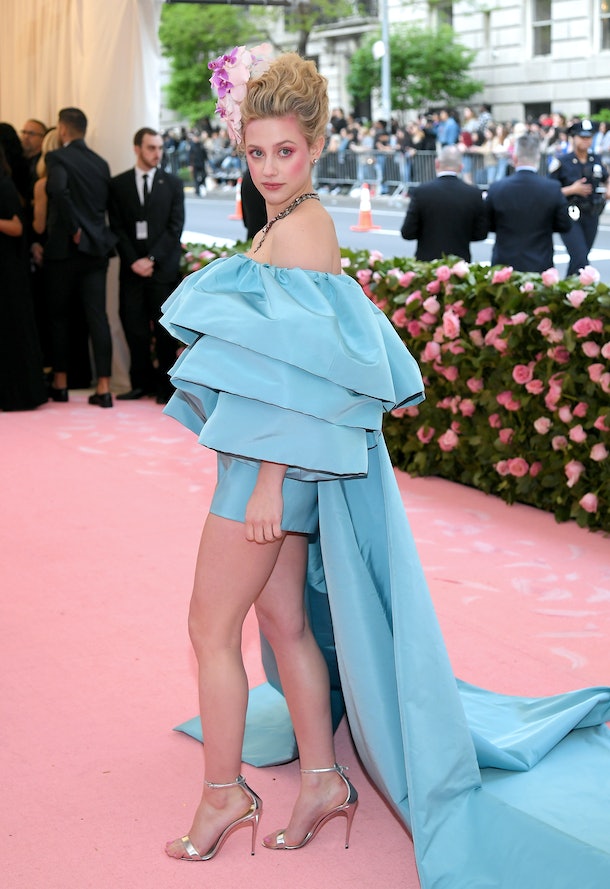 Lili Reinhart’s camp realness was a personal fave, TBH. Many attendees tried to put a campy twist on Marie Antoinette, and her take was the best by far, don’t fight me on it. The turqouise Salvatore Ferragamo set was stunning, and the endless train was major, but it was the hot pink cheekbones and the Versailles-inspired bouffant by hairstylist David Stanwell that really took her look to the next level. 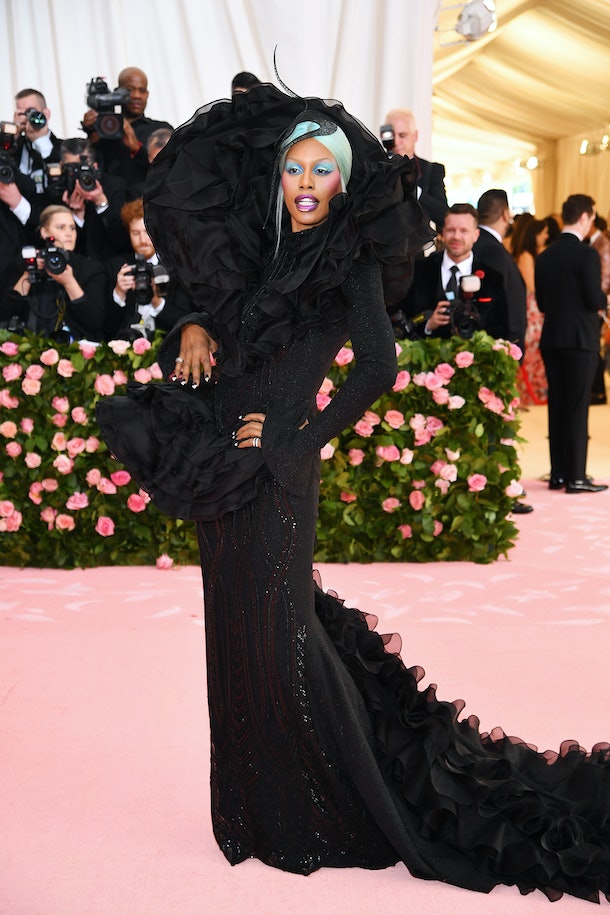 Behold, a true camp goddess! I don’t think I need to explain this one. Everything about this Christian Siriano look is camped up to the gods, and she looked like the extravagant, elegant villian of my fairytale dreams. She also gave a great on-carpet interview, during which she made it clear she was one of few that actually read Sontag’s piece. Laverne, you can do no wrong. 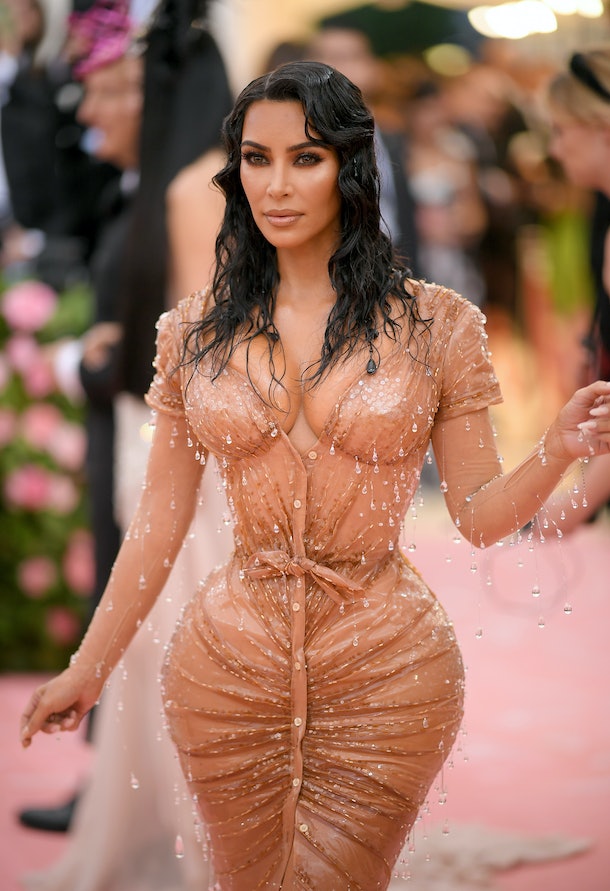 So. When I first saw this dress coming up the Met steps. I was annoyed. Irritated. Angry. Why would she do a naked dress, and completely ignore the theme? Then, when I saw the details, I realized I owed miss Kim K a formal apology. This faux wet fantasy is in fact camp as heck, people! The fake water droplets made of crystal, the "wet" hair and cheekbones, and the fact that this is the iconic Manfred Thierry Mugler’s first design for his namesake brand in 20 years? Kim outdid herself, and I’m sorry I doubted her.

Don’t come for me, I just love her! Her second look didn’t require nearly as much guesswork, as it was quite obviously a camp masterpiece. If you told me Bob Mackie designed this exact ensemble for Cher way back when, I would believe you. Kanye wore a black zip-up hoodie the entire night. Moving right along. 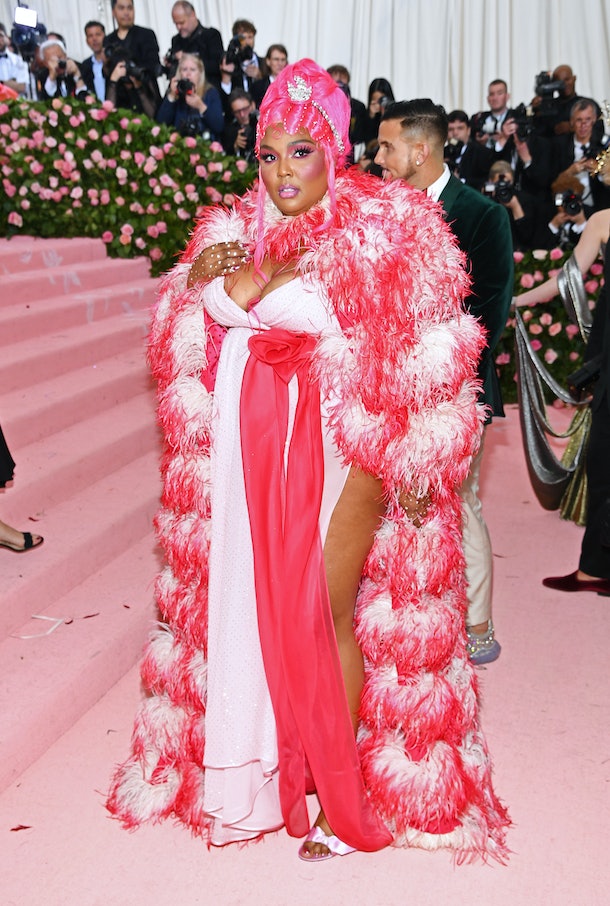 IDK about you, but Lizzo is basically my new favorite person, so I was overjoyed to see her rock this theme. This wig is 100% camp approved, FYI, and I wish she’d wear it every damn day for the rest of her life, or mine, at the very least. BTW, she did actually wear the feathered cape to the airport, and if you don’t get that this act is a flawless real-life performance of camp, then you still don’t get the theme. 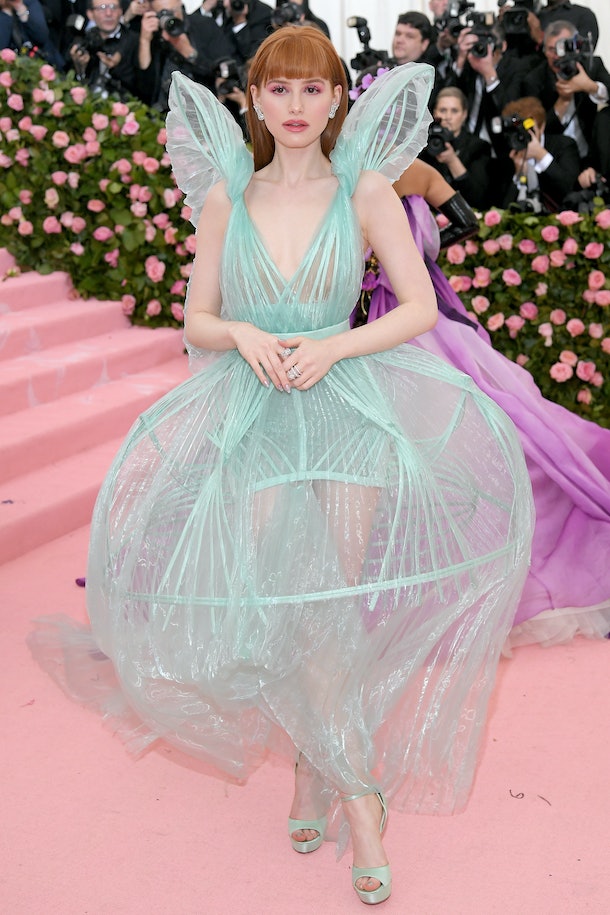 A camp fairy princess! So good! The head-to-toe seafoam green fantasy is sweet, and the scandalous sheer materials contrast the old-fashioned hoop skirt-esque contraption in a way that just works. I also love that her toenail polish matches her shoes perfectly. It’s all in the details, people! 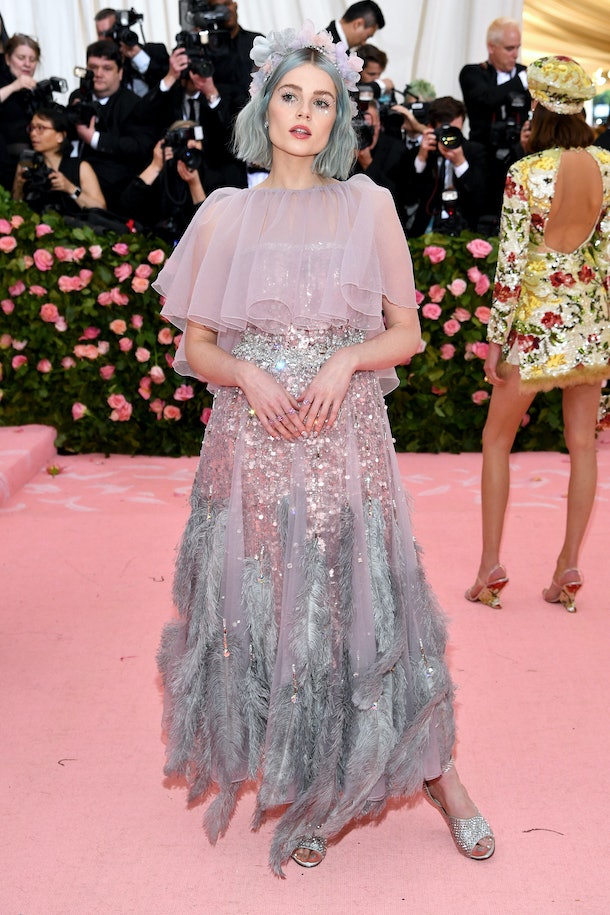 And following Petsch’s camp fairy princess, we have Boynton’s camp mermaid! So damn good. I honestly didn’t recognize her at first, and I think she should keep this dusty teal hair forever. The overall outfit is both intimidating and sweet, outrageous and yet worn almost casually, so in my Book of Camp, it gets a pretty good score. 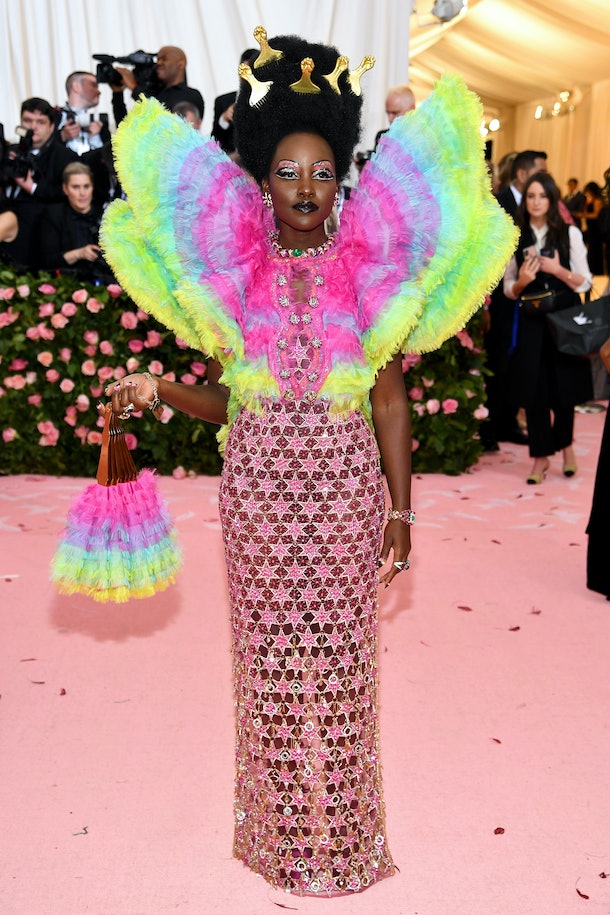 Nyong’o and Cara Delevingne were the only two attendees in rainbow, but honestly, I think N’Yongo’s look was most on-theme. The metal skirt of hot pink stars, structured shoulders slash wings slash rainbow feathered tulle accents, and of course, a damn rainbow tulle feathered fan instead of a purse. I haven’t even begun talking about the afro picks and the Divine-inspired drag queen makeup! Well done, Lupita. Well done. 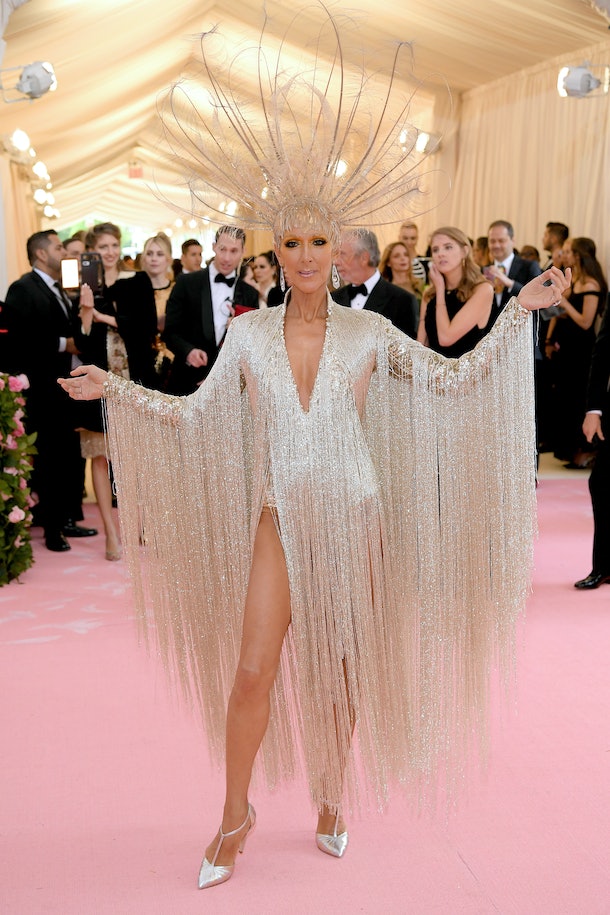 Another outfit I could’ve sworn was a ‘Bob Mackie for Cher’ original! Fringe is not normally camp, but seeing as this is a full-on glitter fringe bodysuit complete with a deep V and a matching headpiece, I’ll allow it. Dion’s look felt so right for the dramatic-in-all-the-good-ways songstress, and her headpiece might be my new Met Gala fave. Sorry, SJP, yours used to hold that title, but you didn’t even show this year, and the competition was fierce. 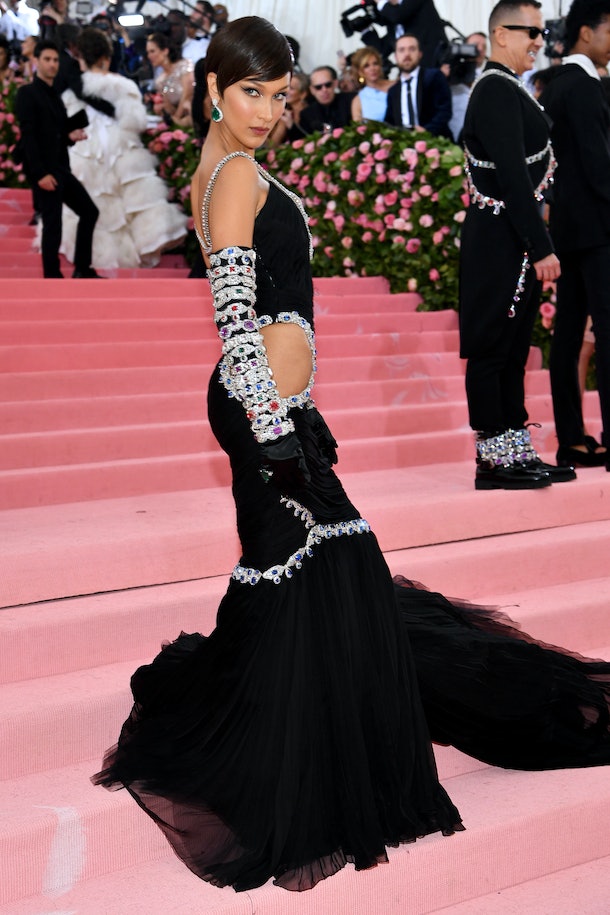 I’ve heard from a lot of fashion-lovers that they felt this look missed the mark, but honestly, it was above and beyond what I expected from Hadid. I’m into it! Granted, I would’ve liked a cape or a headpiece to really camp it up, but the sleek, cropped hairdo, the obscure cutouts, and the stacks on stacks of gems felt very "Dark Daisy Buchanan" to me, so it really worked. 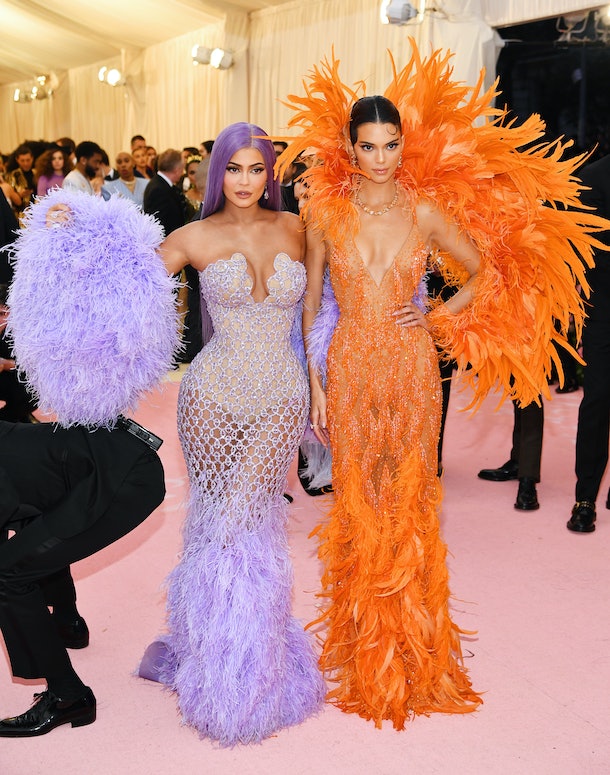 Hi, this is really the only duo I want to talk about. Talk about nailing it! Two feathered frocks alone would not have been camp, but these complimentary looks are juuuuuust right. Kylie’s Lil-Kim-meets-Jessica-Rabbit-meets-lavender-herb fit was everything, and the feathered armwarmers (Is that what they were?) will go down in history, don’t @ me. Kendall, always one for a "less is more" approach, finally went hard with this orange-feathered fantasy, and it’s truly the best she’s ever looked. The evil stepsister vibes were brought, and Zendaya’s not-campy Cinderella didn’t stand a chance. Bravo, ladies. 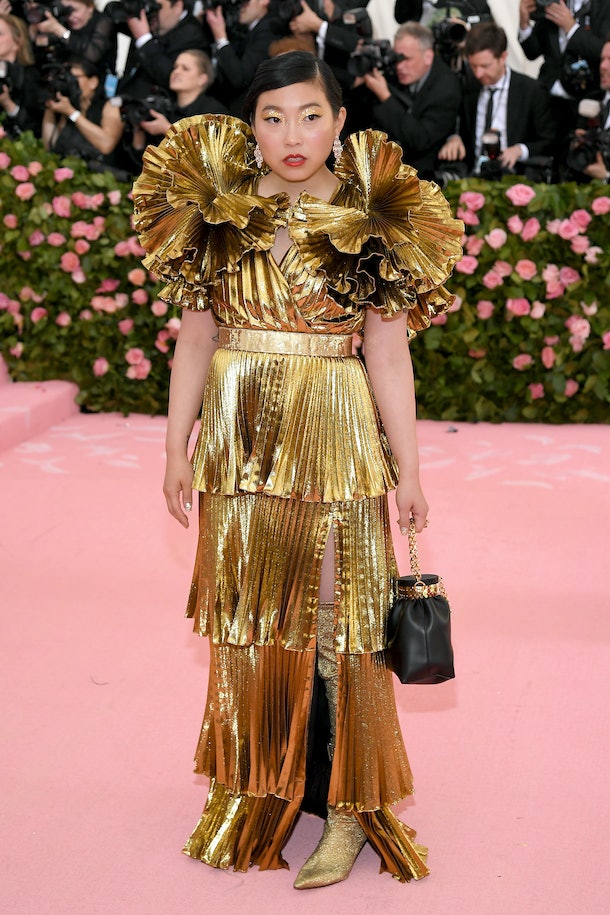 Gold lamé is the official color and fabric of camp, there I said it! Awkwafina obviously knew this, and of course a clever, quick-witted comedienne like herself could tap into the world of camp and deliver an on-point ensemble to embody its soul. The look is just right! And her tall gold boots give me throwback vibes to that incredible Michelle Obama moment, so bonus points have been awarded. 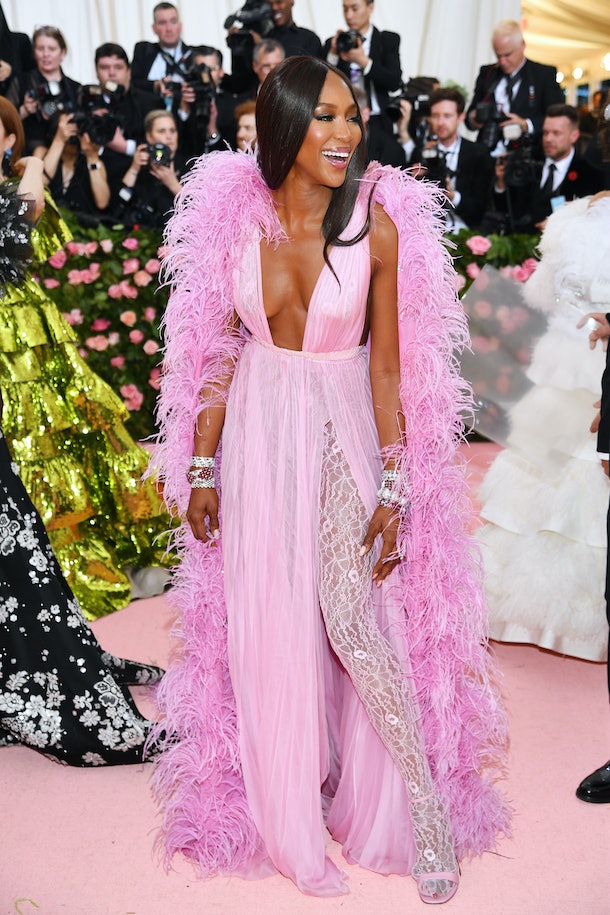 Another one that needs little to no explanation. Campbell came to serve in Valentino, as per usual. She even brought a dude specifically to fan her, which felt performative AF, so I approve. Gorgeous, playful, dramatic, pink. Camp, prom date edition. 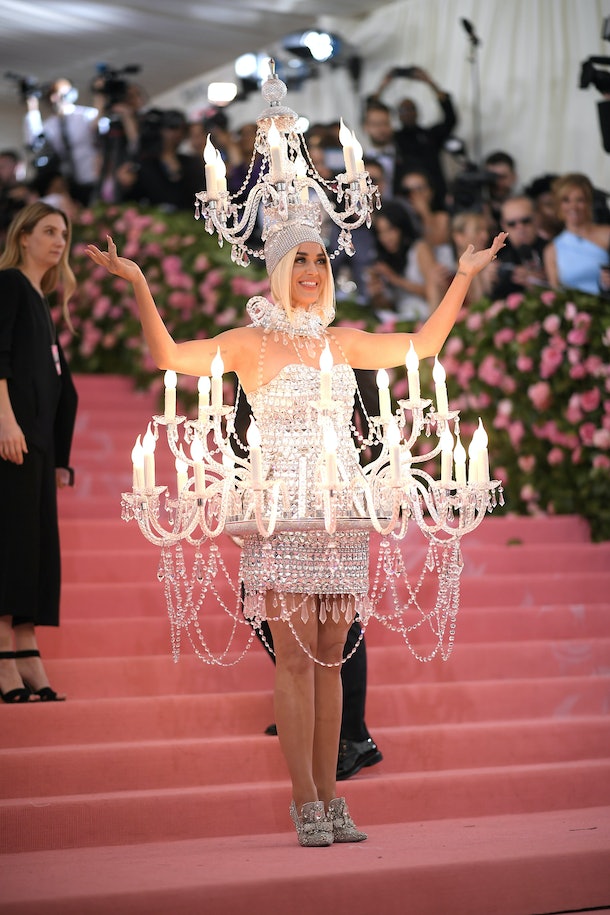 I know people usually chastise Katy Perry for being over-the-top, but guess what? She’s camp as heck. In fact, she’s maybe the only celeb in attendance besides Gaga with real camp potential running through her veins, excluding drag icons like RuPaul, Aquaria, and Violet Chachki, who reek of camp in the best way, of course. I love that she went all out with this Moschino fit, and although I personally didn’t love the shoes, it was otherwise "lit." See what I did there? 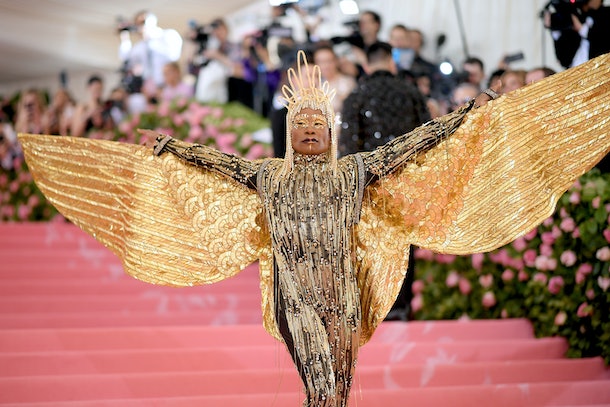 Billy. Freaking. Porter. It was almost too good to be true! The Cleopatra-inspired entrance was beyond, and the golden wings, eyes, and headpiece by The Blonds were absolutely divine. Bravo, camp king. 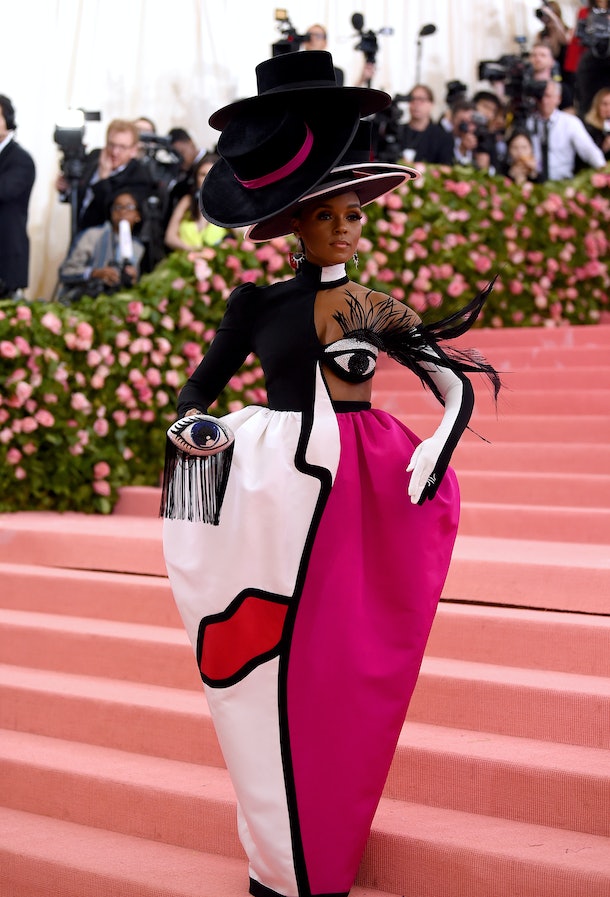 Five hats. Two eyes. One lash-fringed clutch, one bedazzled breast. The most gorgeous geometric skirt on the carpet. And of course, Monae’s dazzling beauty. Not much else to say here, other than that I stan this Christian Siriano surrealist camp energy. 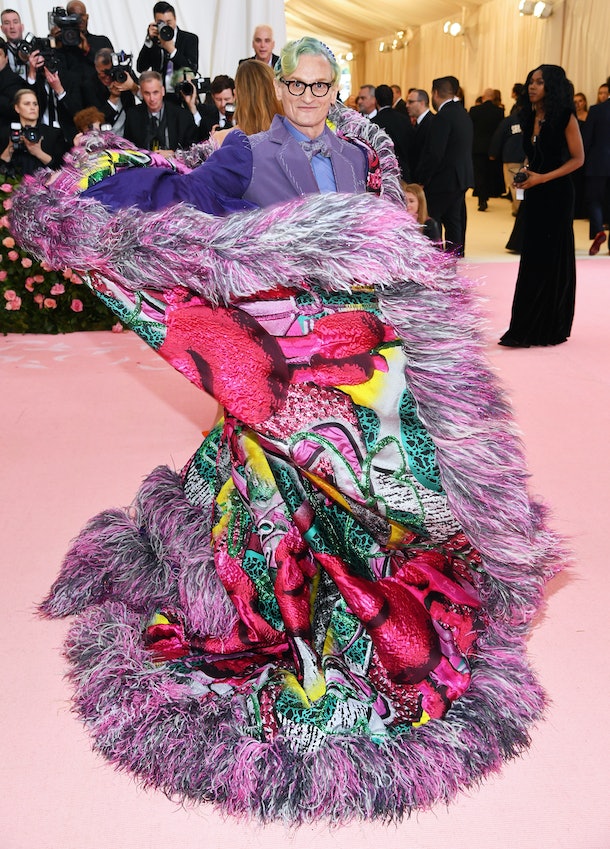 Never in my wildest dreams did I expect Bowles to go so hard for this theme. Talk about nailing it! The seafoam green S-waves hair, the purple stitched suit, the cutout culottes, the purple heels, and of course, the breathtaking cape moment — I bet about a hundred other celebs saw his look and thought "Damn, I should’ve worn that." To them, I say: You’re right, but it’s too late now. Hamish wins. 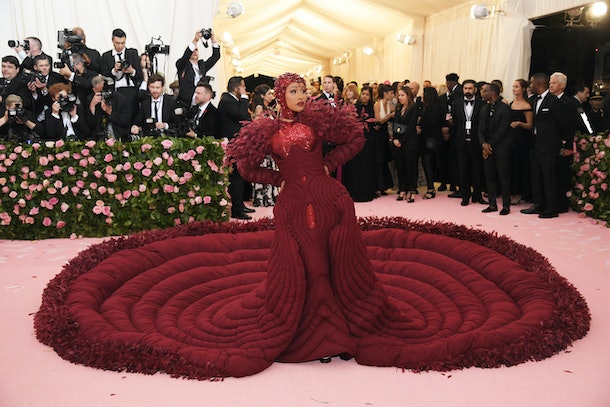 I admit, I was expecting more from Cardi B, but this movie-theatre-seat-turned-duvet-inspired gown suits the theme just fine. The sequined private parts, compelte with ruby red nipples, were a nice touch by designer Thom Browne. BTW, are swim caps trending? This look along with Gigi Hadid’s makes me think the answer is Yes. 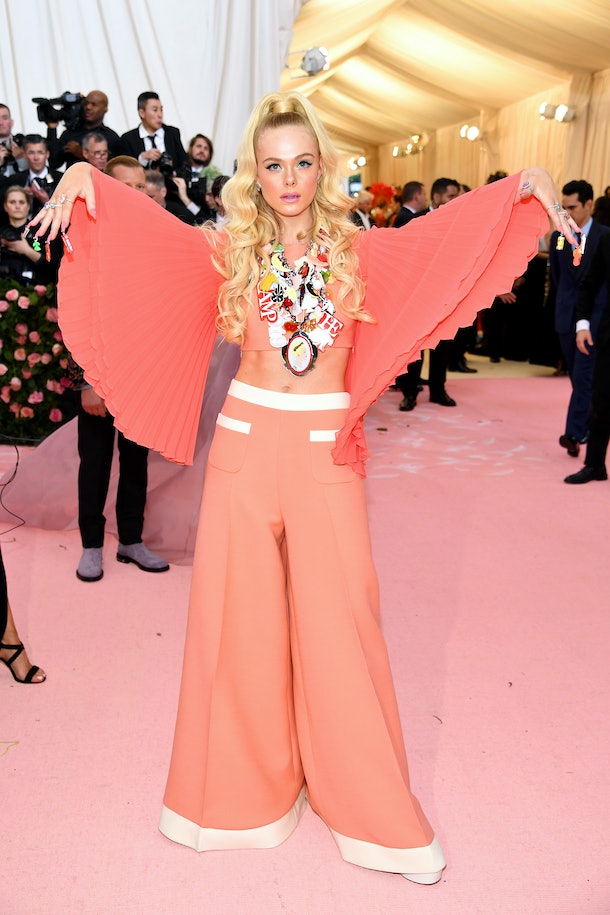 Here we have a totally different kind of camp that also works. I love this Miu Miu two-piece set for Fanning! It was truly the camp masterpiece I didn’t see coming. Please note extremely important beauty details such as her ornate nails, her blue-toned pink lipstick, and her I Dream Of Jeannie-esque ponytail. 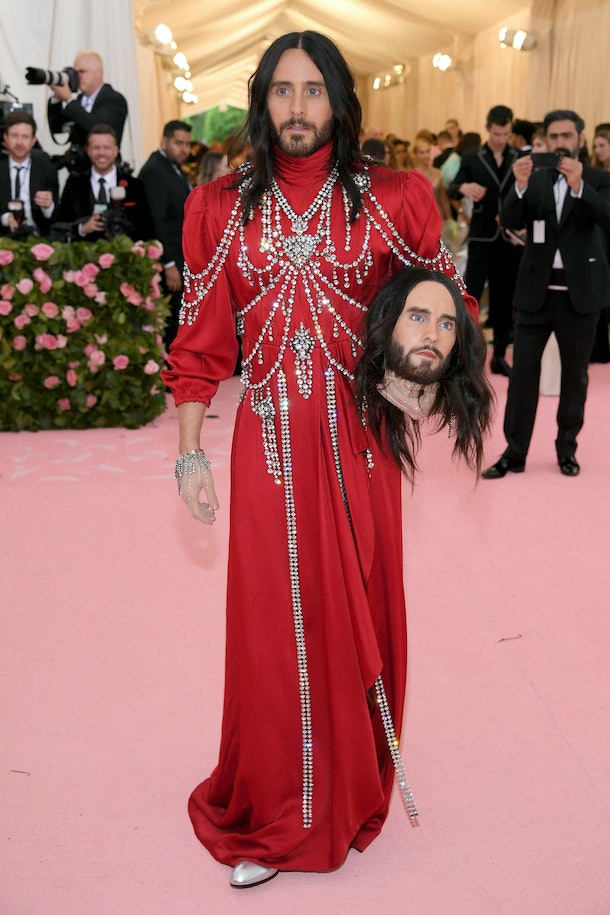 Last but not least, I’ll end my list with Jared Leto, times two if we’re counting by heads. His Gucci accessory was inspired by the brand’s Fall 2018 show, which featured models carrying similar lookalike heads down the runway. It’s 100% camp appropriate, and I applaud the reference.