Helen Porter Mitchell was an unusually naughty child: incorrigible, unreasonable and unmanageable, incapable of behaving even by accident. These were her own words, an unkind self-assessment delivered much later in life, possibly as a means of justifying why her parents did their utmost to prevent her from pursuing a career as a singer.

Her father, David Mitchell, was a God-fearing man who would have regarded his oldest daughter’s voice as a heavenly gift, yet he could not abide the notion of her taking the stage professionally. That would be promiscuous and lacked respectability before God; and his Nellie, as Helen would always be known, would not be a part of it. 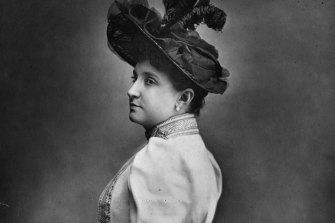 Neither time nor her success would dull her father’s hardline view. Years later, when she returned to Australia as the world’s most famous soprano, Nellie sang in Scots’ Church, Melbourne, which her father had built. It was a magnificent homecoming and yet, afterwards, when she asked her father if he had liked her singing, his only response, delivered in his gruff Scottish burr, was, “I dinna like your hat.”

Yet her father was her hero, a strong and dependable rock but impenetrable and unyielding. David Mitchell had arrived in Melbourne penniless, yet he made a fortune, hewn from his learned skills as a stone mason. He was responsible for many of Melbourne’s most enduring sandstone buildings, including the Royal Exhibition Centre.

He met dark-eyed Isabella Dow at church one Sunday in 1857 and they married a few months later. They would start a family immediately but, tragically, their firstborn, a girl, and then a boy would both die in infancy. Nellie was their third child, born on May 19, 1861. There would be another seven Mitchell children, roaming around a large, turreted house called Doonside, built by their father in inner-city Richmond.

Nellie was a contradiction, a young woman who was happy in her own company and yet someone who needed affirmation. She was stung by criticism but ultimately used it as a driving force to succeed.

But it was her father she so desperately sought to please. “If he was a stern master then I was a
willing pupil,” she would later write in her memoir.

Nellie was a contradiction, a young woman who was happy in her own company and yet someone who needed affirmation. She was stung by criticism but ultimately used it as a driving force to succeed.

Nellie was six years old when she performed at a Sunday School production and just eight when she sang in public for the first time, at a fundraising concert in the Richmond Town Hall in which she accompanied herself on the piano and earned several encores. An enthusiastic reporter from The Australian newspaper observed: “She is a musical prodigy and will make a crowded house whenever she is announced again.”

Nellie’s parents were hoping for “docility” but they only succeeded in entrenching her rebellion and forming an enduring sadness about being misunderstood. She hated the strict boarding school she was sent to, especially as it was so close to home she could see her father riding to work. 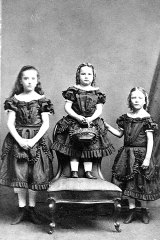 From left: Nellie with her sisters Belle (Isabella) and Annie (Ann), circa 1869.

Although she found school distressing, it was the music program at the Presbyterian Ladies’ College in Burwood that set her on the pathway to success. It was here she found her first singing teacher, Mary Ellen Christian, a concert contralto who had studied at the Royal Academy of Music in London. When she left school, Nellie continued studying singing with Pietro Cecchi, a tenor who had studied in Rome’s Academy of Music. The foundations had been laid.

Nellie’s mother died in October 1881 at the age of 48. It wasn’t unexpected –she had been ill with chronic hepatitis for some time – but, even so, her death from liver failure came as a shock.
In her last days, she had made Nellie promise to take care of the youngest child, four-year-old Florence, known as Vere.

In the bleak months that followed the funeral, Nellie, aged 20, felt the weight of that solemn vow. The sight of Isabella’s body being lowered into the ground in a coffin and covered with dirt was haunting. But death was also a beginning, and there were consequences for the living: her little sister had become a responsibility in a life that, until now, had none.

Nellie’s response was to move Vere’s cot into her own room. Despite her attention, one evening barely three months later Vere fell ill. It was too late to call a doctor, so Nellie put the feverish girl to bed and hoped her temperature would subside by morning. Unable to sleep, she listened with concern to Vere’s wheeze. Clearly the girl had an infection in her chest.

As she finally began drifting off to sleep, Nellie was disturbed by the sense that a third person was in the room. Unable to rid the notion, she sat up to see what she thought was a dark figure near the fire. In her anxiety and drowsiness, she pictured her mother wearing the simple black dress in which she had been buried. Nellie watched, transfixed, as the spectre moved slowly across the room and stood over Vere’s cot, where it raised its hand and pointed at the child before making a sweeping motion and disappearing.

The next morning she told her father what had happened, including the appearance of his late wife’s apparition. David Mitchell, on his way out to attend to business, dismissed his daughter’s concerns and insisted that she delay calling a doctor until he returned that evening.

By the time David Mitchell returned, his young daughter had choked to death. A renewed pall of doom settled over Doonside. Nellie could not shake the sense of shame over the deaths of her mother and Vere. David Mitchell, normally so unemotional, could see the impact the losses were having on her. There was nothing he could do to bring back his wife or youngest child but he could save his oldest.

He had taken a contract to build a mill for a property at Marian, 24 kilometres inland from the township of Mackay in northern Queensland. He decided to take Nellie on a business trip north for several months, leaving the other children to the care of staff. It was a decision that, in a perverted way, would be her making. Nellie would describe the town as barbaric, despite there being a thriving social and cultural community into which she soon fell, joining an amateur company as a pianist and second-string singer. By the end of the year, Nellie had become an indispensable performer; “rapturously encored”, according to one report in the Mackay Mercury.

The sunshine of Queensland had thawed Nellie’s spirits, as David Mitchell had hoped, and she settled into Mackay society with its endless rounds of tea parties, riding and boating trips, even writing home about the fun she was having flirting and then fending off the eligible young men of the town.

At age 21, Nellie Mitchell was handsome rather than pretty, with dark, almond-shaped eyes and a fine-lipped mouth that seemed lost between a long, distinctive nose and prominent oval chin. Her hair was usually worn tied up with tight curls splashed across her forehead, hinting at her mother’s Spanish heritage, as did her light-olive complexion and shapely figure accentuated by a tiny waist.

She enjoyed the attention in Mackay and took none of it seriously, although there was one young man she couldn’t shake off. Charlie Armstrong was rangy, good-looking and strong in the lean manner of someone who has lived an outdoors life, with ice-blue eyes and a shock of blond hair bleached almost white by the sun. He had a demeanour to match; an authority that made men wary and women feel protected.

He was the antithesis of his background, the youngest son of an ageing Irish baronet who was in his mid-60s when Charlie – his 13th child – was born. The baron died when the boy was aged five. It was little wonder then that Charlie’s early adult life was spent wandering from job to job, trying to find his place.

At the age of 17 he was sent to Australia to work on the family station outside Brisbane. He thrived in the bush, where his skills and bravery were admired. Along the way he had picked up the nickname Kangaroo Charlie, which some linked to his ability to stay aboard a bucking stallion until its fury had calmed, while others attributed it to his devastating boxing skills.

Either way, it was clear he and Nellie came from different worlds. Nellie was the oldest child of a self-made man and Charlie the youngest of an entitled baronet; Nellie was a city girl who wanted to ride in carriages and dreamed of singing opera, while her beau was a rodeo-loving country boy whose interest in music began and ended with music hall ditties. But there was an instant attraction between them.

David Mitchell was not quite sure about the relationship. From what he could see, Charlie had plenty of drive but precious little when it came to skills, beyond breaking horses. Perhaps he could also see that his daughter and Charlie were too alike to be a good match. He had already witnessed them lose their tempers and worried at what might happen if they were both angry at the same time.

Although he had doubts, there was no sense in refusing the young couple. By November 1882 Charlie had proposed and Nellie had accepted. And on December 22, they were married in Brisbane.

This article appears in Sunday Life magazine within the Sun-Herald and the Sunday Age on sale October 17. To read more from Sunday Life, visit The Sydney Morning Herald and The Age.

The Booklist is a weekly newsletter for book lovers from books editor Jason Steger. Get it delivered every Friday.