The top of Mt Bogong in Victoria’s high country isn’t where you’d usually whip out a dustbuster, but senior botanist Neville Walsh has a pragmatic approach to plant conservation tools.

The very rare snow daphne, or Kelleria bogongensis, is a tiny, carpeting plant found only in a half-kilometre-square area on Mt Bogong. And it produces little seeds, the size of sesame seeds, that fall onto the ground between its fine leaves. 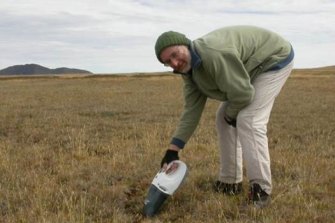 Botanist Neville Walsh collecting seeds of rare snow daphne with a dustbuster as part of a conservation program.Credit:Jan Walsh

“It [the dustbuster] was the only alternative to lying on my tummy with a pair of tweezers for weeks,” says Mr Walsh, who has worked on plant conservation programs at the Royal Botanic Gardens Victoria for 25 years.

Threatened plants like snow daphne have declined at such a rate in Australia over recent decades that the Threatened Species Recovery Hub has released a new list of the 50 species at greatest risk of extinction, and the steps needed to halt and reverse their declines.

In fact Australia has more threatened plants than mammals, birds and reptiles combined and are in even faster decline, says Associate Professor Rod Fensham of the University of Queensland. Many are “right on the brink”.

Although Australia’s flora is globally distinctive, and our threatened plants make up 72 per cent of all threatened species listed under national law, they tend to get less attention than imperilled animals.

Aside from the enigmatic Wollemi pine and a handful of orchids, there aren’t many endangered plants that capture the public imagination in the same way as fluffy koalas or rare parrots.

But without action many of these species are in real trouble. Five of them – the slender-nerved acacia, Stirling Range dryandra, dwarf spider-orchid, trigwell’s ruling, and Bolivia Hill rice-flower – each had less than five mature plants left in the wild at the end of 2020.

To compile the list of the 50 species most at risk of extinction, researchers reviewed all available published information and interviewed more than 120 botanists and land managers across Australia.

Co-researcher Dr Jennifer Silcock, from the University of Queensland, said Australian plants were managed by Aboriginal Australians for at least 60,000 years but since colonisation had faced a range of threats, including habitat loss, weeds and changes to fire regimes.

“Their habitats have been cleared for urbanisation and agriculture and the remnants are heavily modified and degraded,” Dr Silcock said.

Most of the action needed to prevent their extinction was straightforward but relied on long-term funding and commitment, she said.

Conservation of endangered species in the wild should be expanded and monitoring should increase where threats or declines are suspected. “We’re hoping we’ll see targeted investment because this is a clear outline to stop them from going extinct,” Dr Silcock said.

After Neville Walsh’s dustbuster successfully collected about 10,000 snow daphne seeds, half were kept at the Victorian Conservation Seedbank at the Royal Botanic Gardens and (as is the custom for important species) the other half were sent to the “mothership” – the Millennium Seed Bank at Wakehurst Place, a property of Kew Botanic Gardens near London.

The Victorian seed bank currently holds seeds from more than 1400 native Victorian species, which is about one-third of the state’s total and about half of the species considered rare or threatened in Victoria.

Seed banks are an insurance policy, and allow researchers to better understand the biology of seeds, many of which have idiosyncratic cues they need to receive before they germinate, says Mr Walsh. “The purpose of it is to work with conservation programs to get plants back out there in the wild.”

At the end of each day, we’ll send you the most important breaking news headlines, evening entertainment ideas and a long read to enjoy.  Sign up to The Sydney Morning Herald’s newsletter here, The Age’s here, Brisbane Times’ here, and WAtoday’s here.