As we are reminded by Donald Trump’s reckless refusal to concede he has lost the American presidency, on the grounds of spurious claims of electoral fraud, legitimate-based and peaceful transitions of government are fundamental to democracies.

These two books return to the events of November 1975 when an Australian prime minister, Gough Whitlam, had good cause to believe that he had been unfairly robbed of office when governor-general Sir John Kerr dismissed his Labor government after it had been denied supply in the Senate by Malcolm Fraser’s Liberal-National Party coalition. 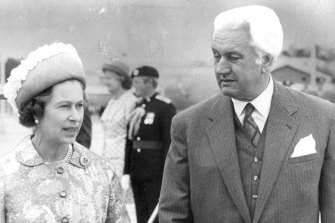 There is little agreement in these two books about the Palace letters over the role of the Queen in Sir John Kerr’s dismissal of the Whitlam government.Credit:Fairfax Media

In arguably the most severe stress test Australia’s constitutional and political system has ever endured, an important reason the damage was contained was that Whitlam, despite the awful provocations, kept faith in that system. He implored Labor supporters to express their rage at the dismissal peaceably through the ballot box and then stoically accepted the verdict of voters.

Jenny Hocking is an award-winning Whitlam biographer. In 2011, her indefatigable research on all things Gough led to a discovery that Kerr’s personal papers in the National Archives contained a copy of a file of his correspondence with Buckingham Palace: a copy Hocking later learned had been made on a Yarralumla photocopier in the ‘‘dead of night’’ by the governor-general’s official secretary. Kerr wanted the copy file as a prompt for a memoir he was writing.

For dismissal researchers, Hocking’s discovery was akin to stumbling on the Holy Grail: how much had Kerr confided in the Queen about the constitutional crisis of 1975 and was the Palace implicated in those events? The archives, however, refused Hocking’s request for access because the letters were private with the practical effect that they were subject to an indefinite embargo by the Queen that applied to the original file. 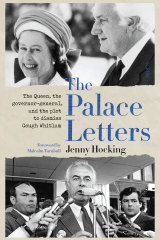 This ruling catalysed several years of legal contest between Hocking and the archives. Twice rebuffed in the Federal Court, Hocking ultimately triumphed in the High Court of Australia, which in May 2020 cleared the way for public access to the Palace letters by finding that they were Commonwealth records and not ‘‘personal’’ communications as argued by the National Archives. The Queen’s embargo over the correspondence was broken.

The greater part of Hocking’s book is an absorbing legal drama, which is interspersed by accounts of other archival discoveries that spiced her determination to access the Palace letters. One of many fascinating sidelights is that among the Sydney legal heavyweights who worked on Hocking’s case pro bono (she would have been unable to sustain the action without their generosity, and separate crowd-funding support) was Whitlam’s eldest son, Antony.

As a recent past holder of the position of National Archives cabinet historian, I regret to say the archives emerge poorly from the story. This cash-strapped organisation, which proclaims its pro-disclosure mission, according to Hocking’s estimate spent nearly $2 million fighting to keep the letters locked away and engaged in questionable tactics such as orchestrating a Kerr family change to the access conditions attached to the copy file. Perhaps the nadir for the archives came following the High Court’s decision when, despite being the face of the battle to keep the Palace letters secret, its director-general unblushingly presided over their public release.

What of the 212 Palace letters? They confirm for Hocking what she had previously concluded from other archival sources: that the Queen abetted Whitlam’s dismissal. The correspondence between Kerr and the Queen’s private secretary, Sir Martin Charteris (her ‘‘amanuensis … His words are her words’’), show that the Palace was privy for months to knowledge that Kerr was contemplating dismissing the government and knew that the governor-general had failed in his duty to warn Whitlam. 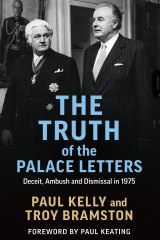 Most decisively, Charteris gave succour to Kerr’s exercise of the Crown’s reserve powers to remove the prime minister by affirming those powers existed and assuaging Kerr’s concerns about the damage to the monarchy that might flow from their use. The effect was to provide Kerr with Buckingham Palace’s imprimatur for the dismissal. In sum, the Palace letters have shredded ‘‘claims of royal neutrality and non-involvement’’.

Authors Paul Kelly and Troy Bramston, both journalists at The Australian newspaper, are also dedicated sleuths of the dismissal. Kelly’s contributions on the topic include his 1976 classic, The Unmaking of Gough. In the preface to their book, Kelly and Bramston ‘‘pay tribute’’ to Hocking for her legal action to prise the lid off the Palace letters.

They also have points of agreement with Hocking. Namely, that Kerr, vain, proud, insecure, petty, preoccupied with being a player, was unfitted to the judicious and discreet ideal model of a governor-general; that Kerr abjectly failed a paramount vice-regal responsibility: to warn the prime minister; and that, as executed by stealth, Kerr’s dismissal of Whitlam was improper.

There is precious else, however, on which Kelly and Bramston concur with Hocking, who they identify as chief architect of what they dub the ‘‘revisionist history’’ or royal conspiracy theory of the dismissal. They say Hocking’s analysis is premised on ‘‘a misunderstanding of the relationship between the governor-general and the Palace’’. The Queen, ‘‘hostage’’ to Kerr throughout the crisis, ‘‘restricted by the Constitution, by geography and by outlook, was little short of a passive but interested observer’’.

Kelly and Bramston offer a sharply contrasting interpretation of the Palace correspondence. For instance, whereas Hocking detects a smoking gun in Charteris’ letter affirming that the reserve powers existed, they see something far less sinister by emphasising the letter’s concluding sentence in which Charteris tells Kerr that those powers ought only to be used ‘‘in the last resort’’ and ‘‘for constitutional and not for political reasons’’.

In essence, as Kelly has consistently insisted, he and Bramston believe the crisis was the sum of the failings of the three major players: Whitlam (his contemptuous treatment and misreading of the governor-general and inflexible determination to bring the Senate to heel), Fraser (his brazen and impatient ambition), ‘‘and, most of all’’, Kerr (his ‘‘deception of the Prime Minister and dismissal by ambush’’. It was a ‘‘homegrown project … Its dynamics are located in Canberra, not London’’.

The unearthing of the Palace letters has significantly advanced our knowledge about the 1975 constitutional crisis. For that, we can thank the indomitable Jenny Hocking. Yet the historical contest over that convulsive episode endures.

The Palace Letters: The Queen, the Governor-General, and the Plot to Dismiss Gough Whitlam, Jenny Hocking, Scribe, $32.99

Paul Strangio is an associate professor of politics at Monash University