From bullet journals to outsourcing and auto-replies, there’s no shortage of productivity hacks available for anyone desperate to free up some time or mental space.

But dive into a pile of productivity podcasts and articles too quickly and you’re likely to find yourself overwhelmed by everything you should be doing and, if you’re anything like me, end up simply continuing on the hamster wheel of tail-chasing tactics. 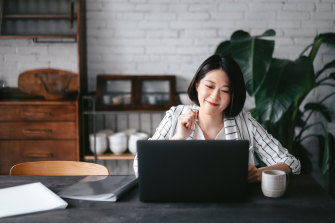 There’s no shortage of advice on productivity, but there’s a simple first step that will lead you to your most productive self.Credit:iStock

Instead of attempting every strategy to work smarter not harder, productivity coach Donna McGeorge, author of The 1 Day Refund, suggests we all start with one simple strategy – identify our most switched on two hours in the day and dedicate them to our meatiest to-dos or most important work.

These two hours are to be treated as sacrosanct with no meetings, email replies or phone tapping.

“Imagine that piece of time was some real estate – you’d protect it, you wouldn’t give it away willy-nilly,” McGeorge says.

The result? Not only does McGeorge believe you’ll produce better work faster, get kudos from your boss or client and potentially enjoy an earlier knock-off time, but you could even gain access to the kind of mental freedom you’d expect from a week-long health retreat.

“So many people I speak to are overwhelmed, out of control and feeling like they are failing at the important things,” she says.

“One of the benefits of doing this is that you get a stronger sense of ‘Wow today’s a good day! I feel under control’. And when unpredictable things happen that might make our day chaotic, we have capacity to cope.”

Finding your two hours of power

While McGeorge finds her best window is 8-10am, she says people with different body clocks will have different windows of focus.

“Most people have an instinct about the particular time they function best,” she says.

“For the majority of us, it’s about an hour after waking, roughly through until midday.”

Professional organiser Amy Revell, co-founder of The Art of Decluttering, is also a fan of finding “two hours of power”. For her, the buzz kicks in at 8pm.

“My days are spent in meetings and with clients, but night times are set aside for creativity and dreaming,” she says.

“I’m such a night owl and that’s when I find my brain is clocked on.”

Revell likes the fact that few people are working at that hour so she’s free to get ahead on big projects without interruption.

“During the day I do what I have to do, and the night is when I get to do what I want to do – it might be designing a new program or thinking, ‘What if we do it this way?‘” she says.

“During the day I do what I have to do, and the night is when I get to do what I want to do.”

“I finish the night by writing a to-do list for the next day and clearing out my emails so I can start with a clean slate the next morning.”

If your schedule renders your natural productive window inaccessible, McGeorge suggests you at least try to get close to it.

“Try to stay in your productive “zone”, so early birds ought try to protect something for the morning and night owls in the afternoon or evening,” she says.

“That said, our body clock is ‘editable’ – evidenced by shift workers and jet lag – so if you are consistent about the time you choose, you can get your body and mind into a rhythm. The real key is protecting something, anything, for focused work.”

Why we resist diving straight in

As tempting as it can be to start the day clearing emails, replying to messages and tidying up loose ends in a bid to “wipe the slate clean” before doing meaningful work, McGeorge says this strategy is usually a brain trick.

“[Attending to emails] makes you feel good and you get a dopamine hit that says, ‘Yeah look at me, getting stuff done!’ but it’s not the right stuff. Defer your dopamine hit to after you’ve had your two hours of really productive stuff,” she suggests.

“Only about 10 per cent of our emails [require] what I’d call a considered response, the rest is just ‘Noted; File; Delete’.”

It can take guts to commit to two hours for what you need to do most, but McGeorge says your bosses, colleagues, family and friends will get the hang of it if you communicate clearly. She urges you to lose the guilt.

“Most people are reasonable if they understand context,” she says.“The interesting thing is, it’s actually more you than them that’s going to be the problem, sticking to it, saying no, shutting the door and protecting it. But you want to be doing the things that your future self will thank you for.”