The Belgian literary critic Paul de Man, in his essay Autobiography as De-Facement, outlined certain loyal elements of the autobiographical form. Although speaking primarily about Wordsworth, his remarks pertain equally to other genres, including fiction and memoir. In autobiography de Man found an epitaphic quality: the autobiography, he said, is a form of personification, “the fiction of an apostrophe to an absent, deceased or voiceless entitly, which posits the possibility of the latter’s reply and confers upon it the power of speech”.

In Amani Haydar’s debut memoir, The Mother Wound, this address – or, as de Man has it, “the fiction of the voice-from-beyond-the-grave” – moves in two directions. It is visible when Haydar addresses the women in her life, both younger and departed. It is equally apparent when Haydar recalls the silence between her mother and grandmother, her grandmother having been confronted about the rushing of women into less than salubrious marriages. 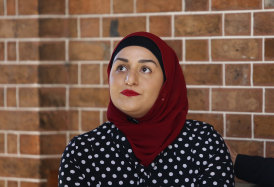 Amana Haydar after testifying in the trial of her father in 2017. ″⁣My father would soon be given a very certain future, but I was gazing at a lifetime of uncertainty.″⁣Credit:Daniel Munoz

Haydar’s mother, Salwa, was stabbed to death by her father in their family home, making worldwide news in 2015. “By the end of 2015,” Haydar writes, “81 women had been killed by a current or former partner in Australia, and Dad hating Mum enough to kill her didn’t seem as unlikely as it once did.”

Liminality is a recurring theme throughout the book. During her daughter’s birth, Haydar sees herself in the grave, figured as “a lung made of brown soil, like a uterus, its walls wet with mud. I was in it and it was in me.”

She reflects on coercion and control, on the struggle for validation both within the family and the larger community: can Haydar criticise the failings of patriarchy without stoking the prejudices of bigots? Can she find justice in the court system, even as, in her father’s hands, it risks becoming an extension of his coercive behaviour?

There are also questions of validation, of being understood, as a minority, only as an either/or being. Haydar’s experience is only ever taken as being a “Muslim problem” or a gender problem. She writes of Muslim women being seen as having “subscribed to our own oppression; not entitled to victimhood because we aren’t allowed to claim innocence in the first place”.

The after effects of abusive behaviour are bracingly depicted: “They want your world to revolve around theirs,” she writes of abusers. “You will not beat them because they will go to lengths that you are not prepared to go.” There is a moment when Haydar becomes cognisant of the limits the judicial system works within, boundaries that foreclose existential satisfaction: “My father would soon be given a very certain future, but I was gazing at a lifetime of uncertainty.”

Haydar’s persistent narrative tics are less subtle. Many passages and chapters in the first half conclude by telegraphing how something Very Bad Will Happen: of her wedding, Haydar writes, “Things were falling into place like beads on a masbaha”; “Mum waved goodbye, and her smile said it all: Go ahead, you’re going to be fine”; describing the house she and her husband buy, she writes, “Happily ever after”; finally, a third of the way through: “Everything is going so well, something bad is bound to happen.”

Later, when this foreshadowing has been exhausted, Haydar switches to a second iteration of the same tic. This one is intended to signal the revelation of something disturbing her mother disclosed about her father years earlier, a piece of evidence she hopes to testify to during his trial: “this crucial thing, this memory, this Big Secret.” It, too, feels gimmicky and unnecessary.

The Mother Wound’s concerns are tragically perennial, visible everywhere from Courtney Barnett singing in Nameless, Faceless about clutching car keys between her fingers, to the statistics Haydar cites, to allegations of violence against women at the highest levels of Australian government. With Destroy the Joint counting 24 women dead this year at the time of writing, they show no sign of going away.

Amani Haydar and Declan Fry are guests at the Melbourne Writers Festival (mwf.com.au).