Thought Strictly’s lead judge was a hoot? As FRANCES HARDY discovered in a riotous encounter at home, she’s got nothing on her mum: So, Shirley, how is it living with your mum and your toyboy lover? ‘If she sleeps with her good ear on the pillow she can’t hear a thing!’

Should Strictly’s head judge Shirley Ballas ever decide to branch into comedy she wouldn’t have far to look for a partner. She and mum Audrey Rich would make the perfect double act; Shirley’s quick-fire wit the foil to her mum’s wise-cracking Scouse humour.

It’s just as well they can share a joke because Audrey, 84, has just moved in permanently with her only daughter, leaving her Wirral home — a stone’s throw from the Wallasey council estate where Shirley was raised — to join Shirley in her gated mini-mansion in South-East London.

Was it an emotional business packing up the lifetime’s worth of memories invested in all of her possessions?

‘I wouldn’t say emotional. Just a pain in the a***.’ laughs Audrey. ‘I don’t really get attached to anything.’ 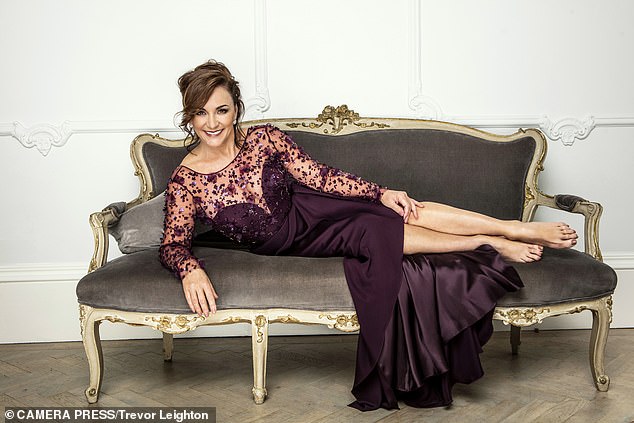 Shirley Ballas, 61, (pictured) who lives in South-East London with her partner Daniel Taylor, 48, reflects on her bond with her mother as Audrey, 84, moves into her home permanently

‘Are you attached to me?’ asks Shirley.

‘We get on very well,’ counters Shirley.

‘When you’re not bossing me around,’ segues her mum.

‘I got all the house prepared for Mum, everything immaculate,’ Shirley continues. ‘When I get in the shower, I drop my clothes on the floor by the door then pick them up as soon as I finish.

‘Mum had only been here ten minutes and she whisked them away and said: “Oh you’re so untidy!” High standards? They’re way beyond high . . .’

‘Well you’ve already cleaned out the pan drawer and washed all my crockery because I don’t use a dishwasher and it hadn’t been done to your standard — and you’d only been here three days! She’s going home next week,’ Shirley jokes, rolling her eyes in mock exasperation.

The good-humoured joshing never stops. At a time when so many elderly parents are shunted into care homes, it’s heartening that Shirley, 61, and her mum are so genuinely close, so compatible and mutually supportive, that they’ve chosen to share each other’s lives; and, of course, Shirley’s five-bedroom home.

I wonder how Shirley’s partner of two years, actor and singer-songwriter Daniel Taylor, 48, gets along with her plain-speaking mum now he, too, is sharing the house when he’s not away working?

‘I did talk to Danny about Mum living here. He holds her in really high regard,’ says Shirley. 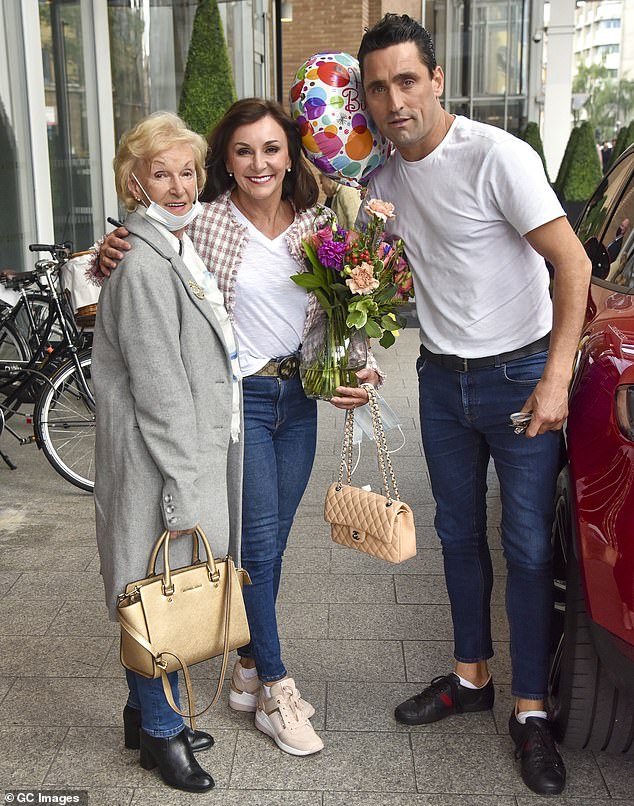 ‘He’s a good lad,’ adds Audrey. ‘I’m very fond of him’ — which is approbation indeed from a woman so economical with her praise.

If Danny popped the question, Shirley — twice married and twice divorced — would ‘definitely consider it’.

‘We’d think about it, wouldn’t we? We’d have to have a vote,’ laughs Audrey.

Shirley continues: ‘Whenever Danny was up North [he’s a Liverpudlian and they met in panto there], he’d be on hand if Mum ever needed help. He’s a very kind and caring man. He’s the best man I’ve ever had in my life.’

‘And you said it’s the best sex life you’ve ever had,’ prompts Audrey helpfully.

Shirley shrieks with laughter. But won’t it be inhibiting knowing her mother is in the house when they’re in the throes of passion?

‘Mum’s a bit deaf. If she sleeps with her good ear on the pillow she can’t hear a thing,’ says Shirley.

‘Well, neither ear’s very good and I don’t like hearing aids because they fall out,’ adds Audrey.

Shirley, of course, has been a fixture in the nation’s sitting rooms every show season weekend since she joined the judging panel of BBC’s Strictly Come Dancing, the world’s most successful reality TV format, replacing head judge Len Goodman in 2017.

And a fortnight ago it was Strictly viewers who noticed a node or lump under Shirley’s arm and messaged her, urging her to have it checked. 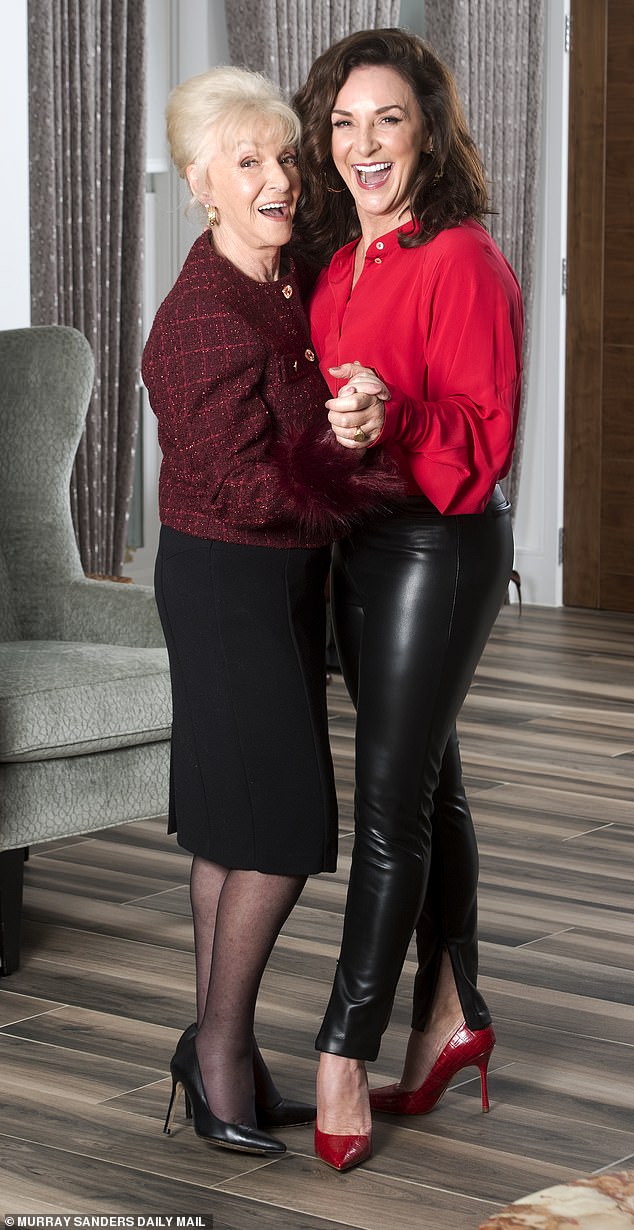 ‘I was demonstrating some paso doble moves on the show and I got eight or nine comments — some from doctors — saying they could see lumps under my arms,’ she explains. ‘They advised, very kindly, that I should have them checked, and I’m very grateful for their thoughtfulness.’

Shirley duly went to her doctor last week. Blood tests revealed her hormones were ‘all over the place’ and her doctor is sending her to King’s College Hospital in London for scans of her ovaries and adrenal glands.

‘All in all, a little concerning. But we have to wait and see,’ she says, adding, ‘And all because several concerned people bothered to let me know. I love you all.’

She has, in no small part, her mum to thank for her entrée to the glittering world of ballroom dancing.

When Shirley went to the U.S., married her second husband, dancer Corky Ballas (they divorced in 2007), and had a son — her adored only child Mark, 35 — Audrey upped sticks and moved to the States for three years so she could care for her grandson while his parents travelled the world competing.

After this, they moved back to England and Audrey took care of Mark until he was 21.

The mother/daughter bond has always been unshakeable. ‘Mum’s my best friend, the only person in the world I can really trust. She can criticise me, but she’ll go for the jugular if anyone else does.’

Shirley seeks Audrey’s advice on the dresses she wears on Strictly and listens to her counsel on how she comes across on the show. 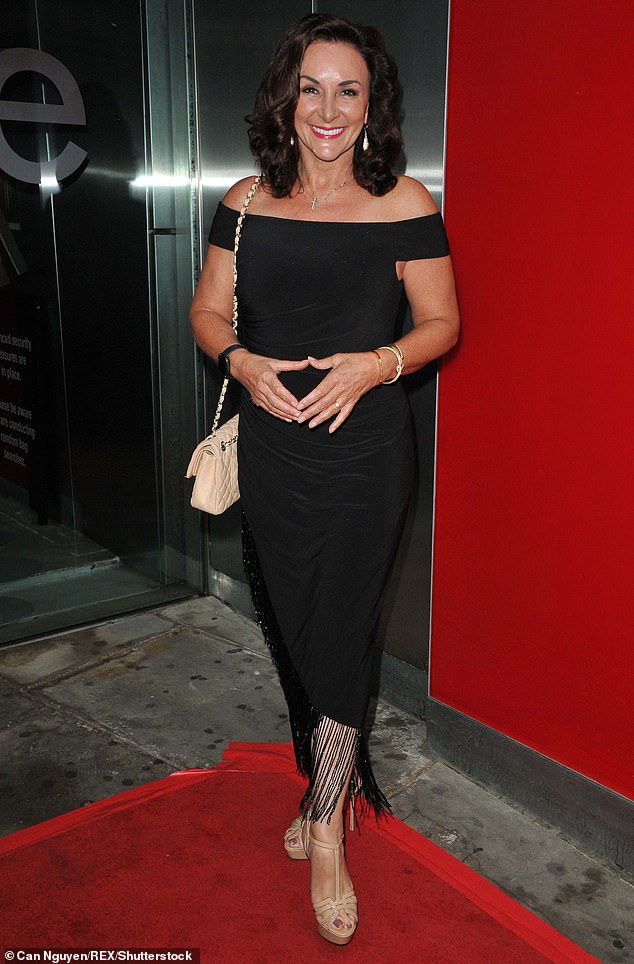 ‘When I started, Mum said: “I turn the telly on sometimes and you’re so scary.” So I’ve softened a bit. And on a Saturday at 5pm I video-call her and say: “Do you like the dress and make-up?” And 80 per cent of the time you do, don’t you?’

‘Well, I think twice before I say if I don’t because you get all stroppy,’ responds Audrey, to laughter. ‘You’re sensitive. You don’t like criticism.’

Today, mum and daughter are immaculately turned out. Shirley, all ballroom-glossed and flawless, looks ageless in leather trousers and towering stilettos.

Audrey is slim, petite and elegant, her honey-blonde hair teased into a beehive.

‘I look like Marge from the Simpsons and when I smile my mouth looks like a letterbox,’ she says, grinning. Shirley hoots.

Beneath the banter are two strong women who have always been there for each other. In 2003 Audrey’s son David — Shirley’s only sibling — while suffering from depression, took his own life, aged 44.

Audrey, who had been with David constantly for six weeks at that point, had gone to London at Shirley’s invitation to watch grandson Mark perform in a carol concert the night David died.

Shirley says: ‘A counsellor told us: “When someone is fixed on suicide, they are waiting for an opportunity.” But Mum blames herself for not being there and I blame myself for convincing her to come to London.

‘Ever since we lost David I’ve tried to make Mum laugh every day. It’s been 18 years and not a day goes by when he isn’t in our thoughts.’ 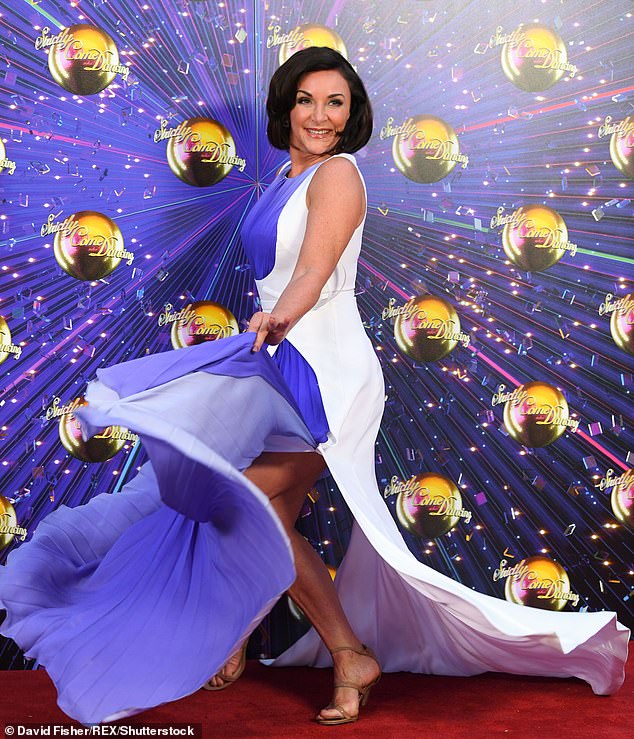 At this point Audrey gets very emotional and says: ‘You do feel guilty. And you feel if you’d had more information about mental health then you’d have done a damn sight better.’

Their solace is David’s daughter Mary, 28, whose own mother was in her early 20s when she died of alcoholism.

Shirley helped Audrey raise her and they’re enormously proud that Mary is now a forensic scientist with the NHS.

They are momentarily reflective, but quickly rally, and Shirley recalls how she supported her mum through colon cancer two years back.

‘We’re not good nurses,’ she remarks. ‘But we look after people,’ adds Audrey. And clearly they do. Audrey was there, too, dispensing her own brand of tough love, when in 2019 Shirley had her breast implants removed, realising they could obscure early signs of cancer in a mammogram.

‘Mum was the only person I wanted there. Against doctors’ orders, I wanted to go back to Strictly three days after the op and I said to Mum: “I need you to take care of me.”

While both mum and daughter are mutually supportive, and clearly house-proud — it’s shoes off at the front door — Shirley is endearingly unconcerned about her mum making her mark, aesthetically, on her home. Audrey’s collection of ceramic frogs is already ranged along the bathroom window sill and her Lladro figurines have pride of place next to Shirley’s dancing trophies on shelves in the open- plan living area, all polished wood floors and sprawling leather sofas. 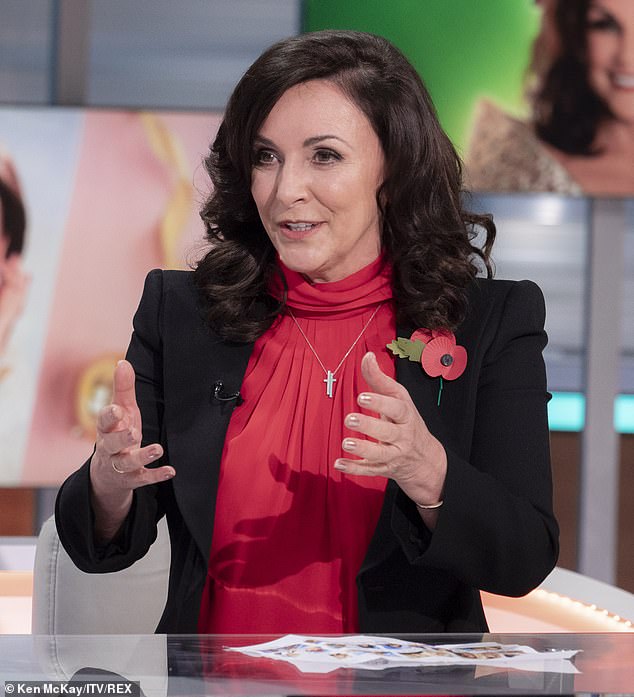 ‘I think we should put books up on those shelves so we look more intelligent,’ puts in Audrey, mischievously, before talking me through the stories behind some of her treasures.

‘See that little lady with an umbrella?’ she says. ‘One of my boyfriends from back home promised to buy it for me, but when he saw the price tag he nearly dropped dead.

She goes off on a riff, reminiscing about past beaux. ‘I had a few boyfriends. There was a greengrocer who gave me cabbages and cauliflowers instead of flowers. But the ones you should go for are painters and decorators, plumbers and electricians.

‘How’s your Danny in the plumbing department?’ she asks Shirley to more gales of laughter.

‘He’s definitely not into DIY, but he can jet-wash the patio,’ says Shirley, ignoring the innuendo.

Audrey has always been stoic, self-sufficient and hard-working. Shirley’s dad, Andy, who was never there for Shirley during her childhood, used to disappear —sometimes for years at a time.

He and Audrey were married for six years although they only lived together for four. Shirley was two when they separated and Audrey never remarried.

With no domestic ties, she had no qualms about leaving home to join Shirley in Texas when Mark was a toddler.

‘I got used to driving in six lanes of traffic on the wrong side of the road, taking Mark to school,’ says Audrey.

‘Corky and I were on a mission to get to the very top of the industry,’ says Shirley. ‘The relationship was a bit volatile, and when we had spats my mum would remove Mark, take him to the park, so he was shielded from it.

‘He’s grown up with immense principles; he’s close to family and friends, and he’s very successful. I put a big part of that down to the way Mum raised him.’

Now, in recompense, Shirley is doing all she can to make her mum feel at home.

‘When Danny’s away, Mum and I both get into my bed and watch TV together. Mum likes watching Coronation Street every night.’

‘Well, it’s only on three times a week,’ puts in Audrey.

‘It feels like it’s 25 times a week. And then we like Vera and Law And Order. All of the crime programmes.’

‘All the murders!’ adds Audrey.

I can’t help thinking Shirley’s mum is a star in the making. And she might well be immortalised in the West End and on Broadway if plans — already advancing with potential producers — to make Shirley’s autobiography into a musical do come off.

We bat around suggestions for the leading roles. Shirley’s ‘open-minded’ about who should play her, but who would be Audrey?

‘Someone funny,’ she says, before adding with a twinkle, ‘and drop-dead gorgeous, of course.’

Shirley’s autobiography, Behind The Sequins (£8.99, Ebury), is out now in paperback.