Tory Burch has removed a tunic-style sweater from its website after keyboard warriors blasted the brand for not crediting traditional Portuguese attire as the design inspiration.

The luxury fashion brand founded in the US debuted a sweater listed as ‘Baja-Inspired Tunic’ on their website, referring to an area in Mexico.

However, photographs of the sweater show a striking resemblance to traditional clothing worn by sailors in Portugal since the 1800s.

Tory Burch removed the garment from their website after continuing to receive backlash across social media, despite renaming the item ‘Sweater Tunic’. 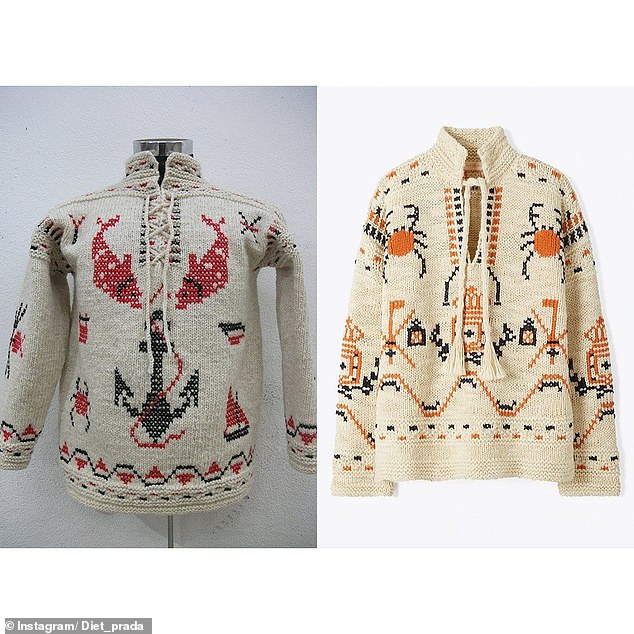 Tory Burch has been blasted by social media users for not crediting Portugal as the inspiration for a sweater in the brand’s Spring 2021 collection. Pictured left: Traditional Portuguese sweater, pictured right: Tory Burch design

Posting on Instagram, many people have accused Tory Burch of stealing from other cultures

In the caption of the post, the fashion watchdog group quoted the Facebook reaction from Ricardo Silva, president of the parish union of Póvoa de Varzim, a coastal city in the north of Portugal.

Diet Prada blasted Tory Burch, saying: ‘Global glam mega mogul Tory Burch has expanded her range from stretchy ballet flats to housewares, and everything in between.

‘When she’s not busy colonizing the mall, her design team is apparently out garnering inspo from the rest of the globe.

‘The latest? A sweater for sale, barely imperceptible from the camisoles poveiras traditionally worn since the early 1800s by Portuguese fisherman from Póvoa de Varzim.’

Sharing Ricardo’s quote, the Instagram account continued: ”The incredible story of how an international brand Tory Burch presents our Poveira Jersey as its own. David’s fight against a Goliath that usurps, does not respond and does not recognize one of the main pieces of Portuguese handicrafts’. 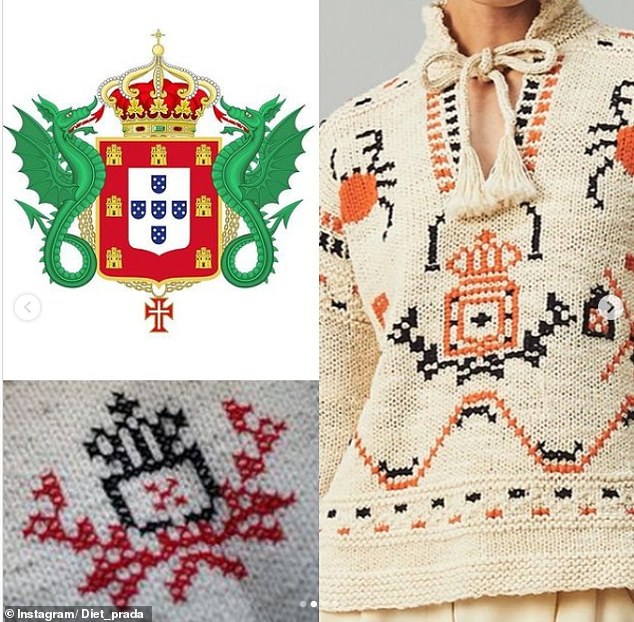 Fashion watchdog group Diet Prada, shared images of the traditional Portuguese design alongside a photo of the garment released by Tory Burch 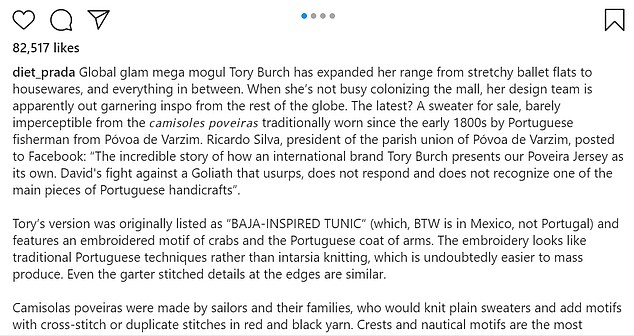 ‘Tory’s version was originally listed as ‘BAJA-INSPIRED TUNIC’ (which, BTW is in Mexico, not Portugal) and features an embroidered motif of crabs and the Portuguese coat of arms. The embroidery looks like traditional Portuguese techniques rather than intarsia knitting, which is undoubtedly easier to mass produce. Even the garter stitched details at the edges are similar.⠀⠀⠀⠀⠀⠀⠀⠀⠀

‘Camisolas poveiras were made by sailors and their families, who would knit plain sweaters and add motifs with cross-stitch or duplicate stitches in red and black yarn. Crests and nautical motifs are the most common subject matter, but many also feature sigla, a local symbol code or form of porto-writing, comparable to Nordic runes.

‘They were often worn for celebrations and voyages of pilgrimage, and now the embroidery is so signature to Póvoa de Varzim that it adorns many of the souvenirs they sell.⠀⠀⠀⠀⠀⠀⠀

‘Tory’s listing has been updated to simply ‘SWEATER TUNIC’ describing it as ‘a symmetrical geometric intarsia design’ that ‘pairs well with elastic-waist pants’. Good thing that outfit is comfortable, because the discussion she needs to have about giving credit where credit is due probably won’t be lol.’ 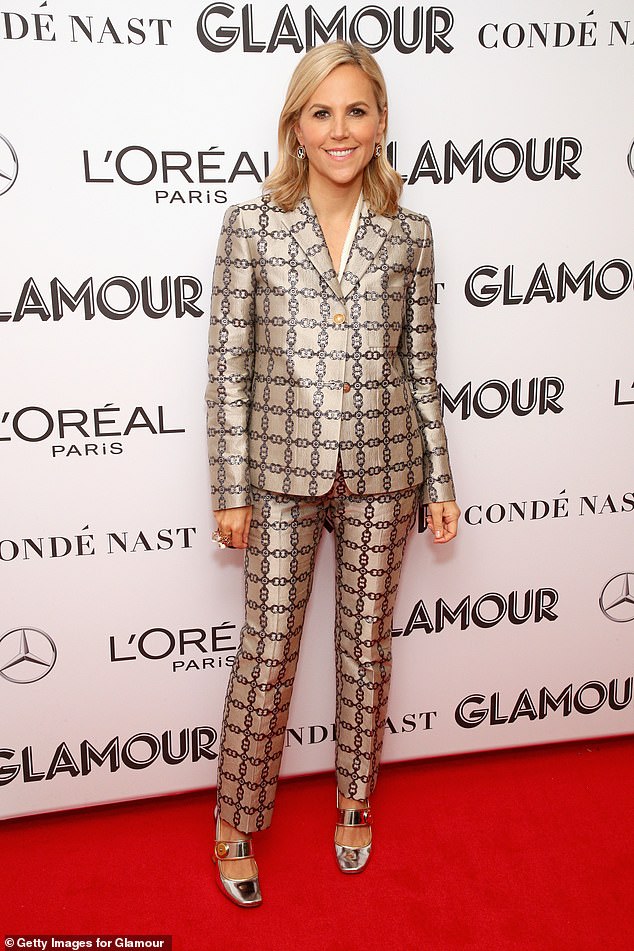 Tory Burch (pictured) issued an apology on the Diet Prada post, admitting the brand is taking ‘full responsibility’ for their mistake 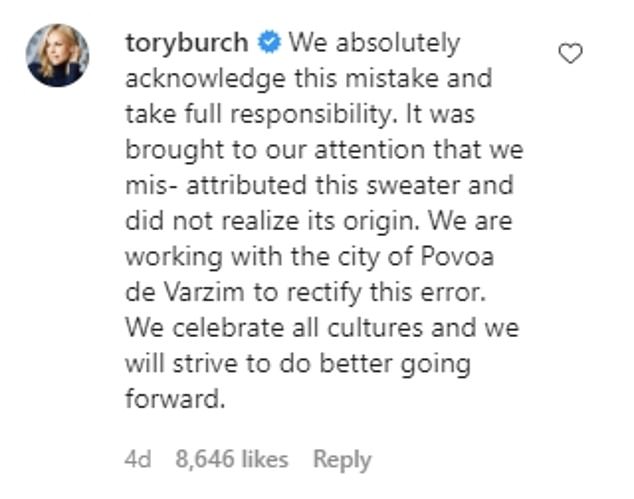 Tory Burch racked up over 8,000 likes as she explained the brand’s aim is to celebrate all cultures

In response to the backlash, Tory Burch commented an apology on the Diet Prada post.

Tory wrote: ‘We absolutely acknowledge this mistake and take full responsibility. It was brought to our attention that we mis-attributed this sweater and did not realize its origin.

‘We are working with the city of Pavoa de Varzim to rectify this error. We celebrate all cultures and we still strive to do better going forward.’

The apology has racked up over 8,000 likes, however the $816 sweater covered in orange and black embroidery from the Spring 2021 collection is no longer available on the Tory Burch website. 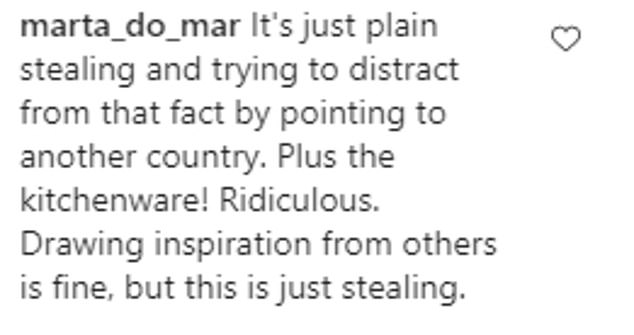 One person wrote: ‘Very disappointed in her brand for stealing this sweater idea and not crediting Portugal’

‘I miss the days when fashion was about revolutionizing and questioning the status quo, now it’s just a bunch of big brands ripping small businesses off and stealing and exploiting other cultures,’ another said.

A  third added: ‘It’s just plain stealing and trying to distract from the fact by pointing to another country. Plus the kitchenware! Ridiculous. Drawing inspiration from others is fine, but this is just stealing.’