Take two! Machine Gun Kelly and Travis Barker are teaming up for their second album together — and their announcement was nothing if not on-brand.

Too Cute! Kourtney Kardashian and Penelope Get Matching Temporary Tattoos

The 45-year-old drummer and 31-year-old “Bloody Valentine” singer, who previously collaborated on Tickets to My Downfall, got matching tattoos on their arms with their new album name, Born With Horns. 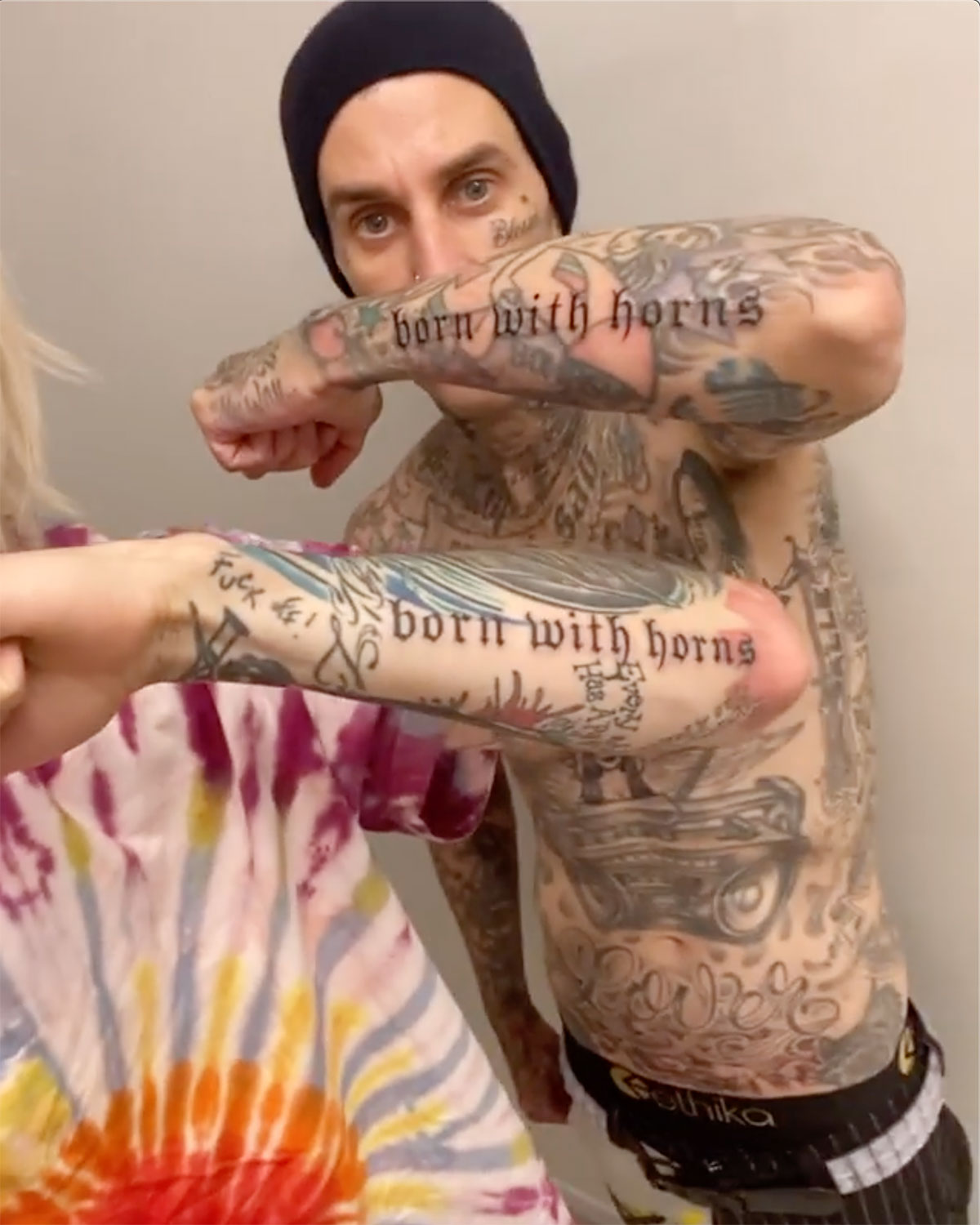 Kelly was the first to share the news, taking a behind-the-scenes video of the duo’s ink, which was written in gothic font on their outer arms.

“‘Born with horns’ the album. We’re back for round two ..” he captioned his Instagram post. Barker, who also debuted the design on his Instagram page, quickly commented, “Let’s fuckin goooo.”

The excitement was high among fans, with many taking to the comments section to share their love for the pair’s new ink and upcoming album.

“KELLS & TRAV = A LEGENDARY DUO,” a fan wrote. Another added: “AND SO BEGINS THE BORN WITH HORNS ERA.”

Some simply couldn’t get over the sheer number of tattoos the rockers collectively have. “Travis has tattoos on his tattoos,” a person observed. Someone else chimed in: “Legendary to have matching tats with @travisbarker.”

For their latest designs, Kelly and Barker turned to tattoo artist Chuey Quintanar. Barker previously turned to the Los Angeles-based artist in April to get a tattoo of girlfriend Kourtney Kardashian’s name on his chest.

While their matchy-matchy ink was the formal announcement — album name and all — Kelly, who also has a tattoo on his neck in honor of his album Tickets to My Downfall, did tease one of the new tracks via Instagram over the weekend.

“Signed a deal, I got paper cuts. ✍🏼🩸 Wednesday 9pm,” he captioned his post, signing the lyrics to a song from his new album.

See All the Celebs Who Got Tribute Tattoos for Love: Photos

Fans were clearly thrilled about the upcoming single, which is being dropped with accompanying music video.

“SO EXCITED OMFG,” a user wrote, while someone else chimed in: “Drop this sh—t right f—king now.”

Still, all others could focus on was his long hair. A user wrote: “U cool but cut ur hair bro.”  Another added, “Movies over cut the hair,”referencing Good News, where he will play a “rising but troubled musician,” according to deadline.

The “My Ex’s Best Friend” singer’s hair has been a topic of conversation in recent weeks. In June, social media was in a tizzy, convinced that Kelly has been wearing hair extension to cover up his transformation for the movie.