The man charged with raping former ministerial staffer Brittany Higgins will likely go to trial after next year’s federal election.

The ACT Supreme Court has set a tentative trial date of June 6, 2022, for Bruce Lehrmann to face a charge of sexual intercourse without consent and being reckless as to whether Ms Higgins had consented. 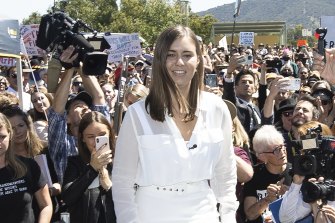 The trial is expected to last four weeks, with ACT Director of Public Prosecutions Shane Drumgold telling the court on Monday he anticipated his case would take two weeks.

Mr Drumgold asked if it was possible to hold the trial sooner than June, but its anticipated length restricted possible dates. Defence lawyer Warwick Korn told the court an offer of an alternative trial period in April was not suitable.

Ms Higgins went public in February with allegations Mr Lehrmann assaulted her in the Parliament House office of minister Linda Reynolds, for whom they both worked, on March 23, 2019.

Her allegations sparked a national conversation about the treatment of women and their involvement in politics.

The next federal election is due to be held by late May.